The Mystery of the Rings

Preserved inside a low circular wall remains evidence from some 1,000 years ago that Native Americans built their own trade routes through this area. Archaeologists hypothesize that the circles of half buried stones inside this perimeter were once the foundations of stone and brush structures set up along these routes. The Santa Fe Trail most likely followed these byways. Unfortunately what proved invaluable for westward expansion proved devastating for Native Americans. (from plaque at site)

The Apaches were the dominant native culture in this region for over 200 years. In the 1500s they traveled here from Canada to hunt, cultivate the land, and harvest their crops. The women also wove beautiful baskets. Spanish explorers named this tribe of Apaches, Apache de la Xicarilla (Jicarilla), or People of the Baskets.

In the early 1700s Mouache Utes arrived to hunt and gather. Since they moved with the seasons this area was popular in the autumn when they could harvest and store pine seeds from the abundant pinons in the forest. (from plaque at Mystery of the Rings site) Below is a picture of the Ute, Wah-Be-Git.

Another feature of the park, which I did not see, is the K-T Boundary between the Mesozoic and Cenozoic geological eras. (from cpw.state.co.us) According to epod.usra.edu, it is also known as the Cretaceous-Tertiary K-T Boundary. However, it is now named the Cretaceous-Paleogene (K-Pg) Boundary. So, what does this all mean? Why is this important? Whatever the initials, this all has to do with a thin layer of clay separating the rock from the time when dinosaurs lived, the Cretaceous Period, with the layers of rock from the time when they died off, the Tertiary Period. K-T refers to the layer of clay separating these layers of rock. (from formontana.net)

Check out this link at epod.usra.edu for a better picture and further explanation.

Trinidad is a gateway to the Rockies, one of a line of several cities separating the Colorado Rockies from the Great Plains. The Spanish Peaks, snow covered in a photo above, were landmarks for Santa Fe Trail travelers. Legend has it that rain was created on these mountain tops to nurture the valley below with earth’s endless bounty.

Simpson’s Rest, a sandstone bluff, marks the entrance to the mountain region of the Santa Fe Trail. George S. Simpson was a famous trader and explorer from MO who first came toTrinidad in 1848, settled here later, and requested to be buried upon this mountain top. Today the mountain displays the nightly lit sign of the city. (from santafetrailscenicandhistoricalbyway.org)

On Father’s Day only DAD is illuminated. (from trinidadco.com)

Jutting out of the surrounding mountains is an unusual two level peak that we kept following and wondering about. 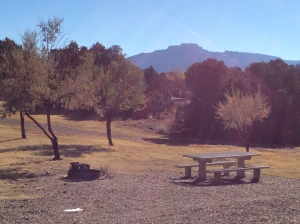 Fisher’s Peak dominates the skyline south of Trinidad. This major landmark for travelers was formed over one million years ago from volcanic activity. It overlooks Raton Pass between Trinidad, Colorado and Raton, New Mexico. Depending upon which way one traveled , north or south, the peak marked the beginning or end of the pass. According to popular legend, in 1846, Prussian Officer Captain Waldemar Fischer and his soldiers were traveling from southern Colorado to Santa Fe, New Mexico when they got lost searching for the passageway through the mountains. Fischer made a bet that he could climb the nearby peak and be back before his troops finished eating breakfast. Well, he lost the bet but his name was immortalized. (from santafetrailscenicandhistoricalbyway.org)

State Highway 12 is one of the most scenic and historical drives in Colorado. 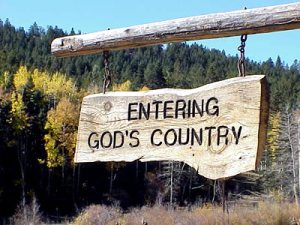 The route travels from La Veta through the Rocky Mountains to Trinidad. 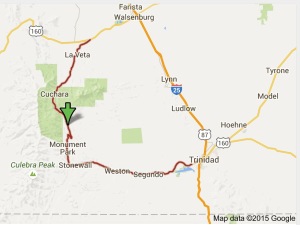 Jeff and I did not have enough time to explore this scenic drive this time but we intend to drive the 82 mile loop sometime in our future travels. To learn more and experience the splendor, click on this YouTube video: