Tomorrow we leave Lake Elsinore and head back east to Ollie Land to celebrate Oliver’s first birthday. So, I just want to share and record the special places we visited during our winter in Southern California.

My son, John, and his wife, Amanda, live here with my grand-dog, Hugo. They are the main reason we chose to spend winter in Southern California, besides the warm climate, of course.  About an hour away across the Ortega Highway, to I-5 North and the 405, they live off of Jamboree Road. If you were ever involved with the Boy Scouts or are ever on the show, Jeopardy, you may be interested to learn that the Irvine Ranch hosted the National Boy Scouts’ Jamboree in 1953 and that is how the street received its name. A further factoid is this: David Sills from Illinois attended this event as a young scout and later returned to Irvine to serve 4 terms as mayor!

Irvine’s 66 square miles in Orange County is a planned city developed mainly by the Irvine Company. The city evolved around the building of the University of California, Irvine (UCI) in 1959 and was incorporated in 1971.

From 1864 – 1868 James Irvine and his partners acquired the lands of 3 Spanish/Mexican ranches and formed the Irvine Ranch to graze sheep. In 1870 tenant farming was permitted. James Irvine eventually bought out his partners and upon his death in 1886, James Jr. inherited the land and incorporated it into the Irvine Company. The ranch was devoted to growing field crops, citrus, and olives. Upon James Jr.’s death in 1947, his son, Myford, began opening up parcels of the ranch for urban development. (en.m.wikipedia.org)

We spent Thanksgiving in Irvine. Jeff prepared the traditional dinner which we shared with John, Amanda, her parents, and her cousin. Jeff dropped me off the night before so John and I could clean and put the turkey in the oven by 7:30 Thanksgiving morning. Amanda and her mother were in Texas visiting her grandmother so John and I drank wine and had a jammie party.

Irvine was our “meet-up” place with John and Amanda as they showed us around California.

We ordered in Korean fusion food and Vietnamese pho. John and Jeff went out to the Persian market and brought back a delicious assortment of delicacies and the most wonderful flatbread.

John picked me up at LAX when I returned in February from Columbus, Ohio. I had a crud of a cold and he sent me back to Lake Elsinore with vitamin C and Mucinex. In return I passed the crud onto him!

And now Irvine will no longer be home to John and Amanda as they are moving to Dublin, Ireland in April. Amanda has accepted a new position with her company fulfilling a life-long dream to live across the ocean! 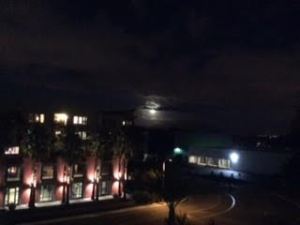 One thought on “Car Trippin’… Irvine”