From my Old Testament history, I know that Joshua became the leader of the Israelites after Moses died. But why is a tree in the desert named after him?

Jeff and I spent the first day of 2016 here. As we were becoming more comfortable with leaving the dogs behind in the RV in Lake Elsinore, we traveled without them for our day trip.

Located in southeastern CA, the park encompasses 2 deserts each with its distinct ecosystem determined primarily by its elevation. (en m.wikipedia.org) 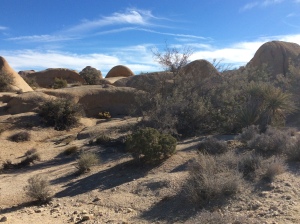 The Mojave Desert has elevations above 3,000 feet. Amid the boulders, that attract rock climbers from all over, are pinyon pines, scrub oaks, yuccas, and prickly pear cacti. (park brochure) 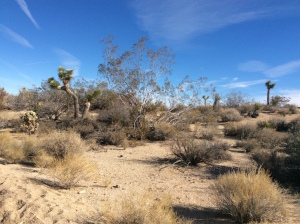 As a matter of fact, the crazy looking Joshua tree isn’t really a tree at all, but a species of yucca. Branching occurs after its cluster of flowers finishing blooming from February through April. (park brochure) 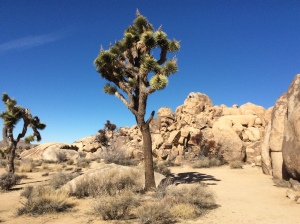 How the tree was named:

Mormon immigrants crossing the Colorado River in the mid 1800s encountered the tree and named it after Joshua fro the Bible. The outstretched limbs reminded them of hands reaching out in prayer, guiding the pioneers westward. (nps.gov) (Jane Rodgers)

These stacked boulders started forming eons ago from underground volcanic activity. Magma, in a molten form of monzogranite, rose fro deep within the earth and intruded its way over the existing rock. As the granite cooled, it crystalized underground and created horizontal and vertical cracks called joints. The granite continued uplifting where it came into contact with groundwater. As the surface soil eroded, piles of monzogranite scattered across the desert. (park brochure) 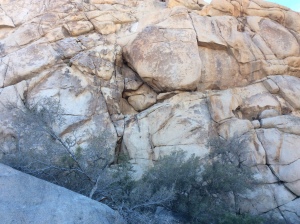 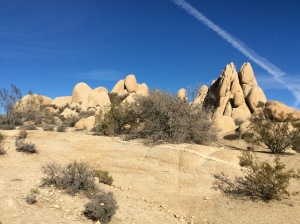