We pass through Westmorland. By the number of roadside signs, the town is famous for its date milkshakes.

So I did a little research and learned that in the 1890s date palm trees were planted in Southern California’s Coachella Valley. Ah, but not just any date palm. It’s true that the over 6,500 acres of date palms produce over 40 million pounds of dates annually, but this yield only accounts for less than 15% of the world’s production of dates. The difference is in the quality of dates produced. Among the 4 primary types of dates produced are the deliciously sweet Medjool variety.  The Spanish missionaries introduced dates to northern Mexico and Southern California in the 1700s. (seecalifornia.com)

According to its web site, cityofwestmorland.net, Westmorland is a small residential community that sits along State Highway 86. Located in the Imperial Valley, it is in one of the most scenic desert locations in the Southwest and is among one of the most fertile agricultural regions in the world.

We pass through Brawley on Highway 86 to catch Highway 111. According to brawley-ca.gov, the Imperial Land Company laid out the city in 1902 and tried to name it after the land-owner, J.H. Braly, who refused to lend his name. In 1908 Brawley incorporated as a “tent city” of approximately 100 people who lived there working for the railroad or farming the land. Today it looks like a city anywhere.

And also reflects the wear and tear of surviving cities everywhere.

We head south on Highway 111 towards Mexico and pick up I-8 East towards Yuma, Arizona. Riding along the border we encounter the Imperial Sand Dunes. 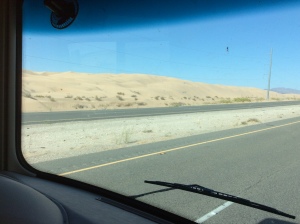 And an RV park!

The closest exit to Mexico…

And the Colorado River separating California and Arizona, as captured from the passenger’s seat through the window screen. (You have to be quick when traveling in an RV!)

Finally we arrive in Yuma, Arizona to spend the night at the Arizona Sands RV Park.

We’ll catch up again tomorrow. I still have Car Trippin’ highlights to share too. But tonight is an end to another day in southern Arizona…