After 4 1/2 months snow birding in Lake Elsinore, California we unplugged the RV, hitched the car and headed across to Columbus, Ohio for a very important first birthday. That was yesterday and today we are waking up in Yuma, Arizona ready to do it all again.

Always looking for the scenic route, Jeff defies the Garmin’s common sense and opts for adventures off the freeway. Yesterday did not disappoint. 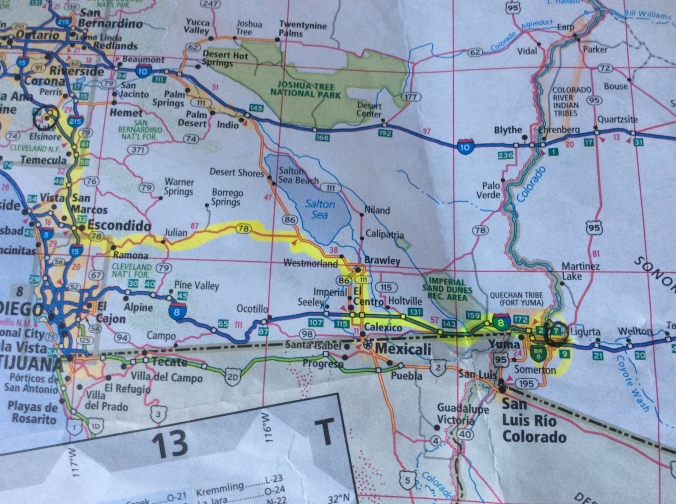 We head south on I-5 and turn onto Highway 78 in Escondido where we pick up another portion of the Cleveland National Forest. These curves make the Ortega Highway look tame. 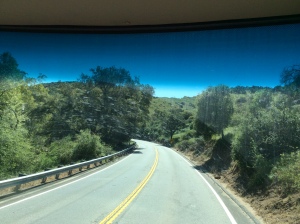 The Forest weaves its way in and out of the town of Ramona. It may only be 36 miles away from the hustle and bustle of San Diego, but even a small glimpse makes you feel like you have stepped back in time to its history of miners, cowboys, vaqueros, Indians, confederate soldiers and Kit Carson. (experienceramona.com)

The “Real” on Ramona:

The trek from Ramona to Julian continues through the Cleveland National Forest. Nestled between the Cuyamaca and the Vulcan mountains, Julian is a quaint little mountain retreat known for its plentiful B&Bs. A cattleman named Fred Coleman discovered the first fleck of gold in early 1870. For the next 10 years gold diggers rushed to the town seeking their fortune. When the gold no longer panned out, settlers stayed to tend the soil and raise animals and discovered the area was excellent for growing apple trees. During the fall harvest, tons of tourists visit to eat, drink, buy, and enjoy everything apple. (julian-california.com) Here’s a fun fact from this web site. For a while the only indoor toilet in Julian was located in the town’s jail!

Leaving Julian we expect a smoother ride, however…

There are those hairpin turns again! And just as quickly, they flatten out. 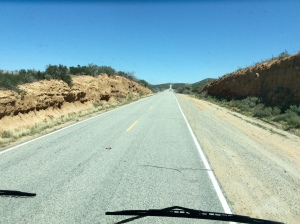 And then we are in the desert. Colorful cacti and scrub brush catch our eyes contrasting against the sandy soil and pale rocks.