Forty miles east of Bowie on I-10, we cross into New Mexico right after I find the mountain top silhouette of a Native American gazing into the sky. (As we were leaving Dwayne’s I stopped to chat with 2 gentlemen at the dumpster. The man from NM told me to look for the face in the mountains to the south. This must be  his lower case cursive “r” experience I wrote about yesterday.)

(I also learned yesterday that cropping the pictures I take from my iPad doesn’t necessarily make the photos post as close-ups. If only you could see the original pics on your devices…)

Here are some highlights of our travels to Alamogordo, NM. 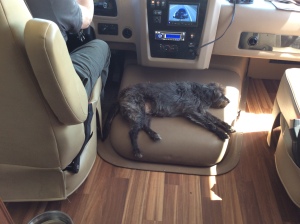 Passing through Las Cruces we continue on Highway 70 and drive by the White Sands National Monument.

Wave-like dunes of gypsum sand crystals engulf 275 square miles of desert creating  the largest gypsum dunefield in the world. (nps.gov) Gypsum is rarely found in sand-form because it is water-soluble and rain dissolves it as it is carried out to sea. The Tularosa Basin, however, is enclosed so the rain that dissolves the gypsum either sinks into the ground or forms shallow pools that eventually dry out. The gypsum is left in a crystalline form, called selenite, on the surface. (en.m.wikipedia.org)

This area is also home to the White Sands Missile Range, which includes the Trinity Site used for the first atomic bomb test. According to the nps.org  web site, missile testing periodically requires the closure of Highway 70 or the National Monument Park. 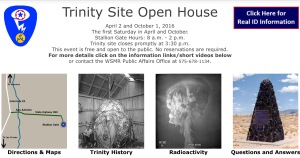 As mentioned above, missiles are still tested, but more importantly today, the White Sands Missile Range is one of the most sophisticated testing facilities in the world for measuring whether or not a developed product can perform the job for which it was designed. Products include tactile missile systems, automobiles, telephones, and even rat traps. (wsmr.army.mil)

And we arrive at Edgington RV Park in Alamogordo, NM… 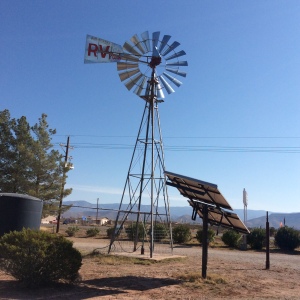 Sam welcomes us and invites us to the pond for a picnic lunch. It’s her daughter’s birthday. She is turning 3!

We settle in and salute the sun…

A Bit About Alamogordo:

One thought on “Goin’ Places That I’ve Never Been… Alamogordo, New Mexico”