First of all, I would like to address my use of the word “gypsy” on my website and blog. I do not use this term derogatorily. For me a gypsy reflects my free spirit and sense of adventure. My Eastern-European roots are planted in the Czech Republic and Slovakia, where my ancestors probably lived the life of peasants and most likely were from the Roma class. So, I use this word with endearment as it so appropriately fits my nomadic lifestyle of today.

Secondly, yes, that is an oil well in yesterday’s sunset photo, an active one no less, right outside the front of the RV!

Our destination today has no twists or turns, well almost. We leave Odessa’s Mesquite Oasis RV Park and hit the road, I-20 East, for Weatherford, TX. 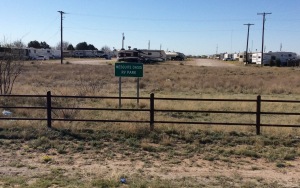 And, yes, we have strayed from our original plans a bit as we are learning that the scenic route does not always live up to its name.

The oil fields and desert unfold into a greener landscape of trees and grass.

Our off-highway adventure begins as we take the exit for Mineral Wells, Texas en route to West End RV Park, our resting place for the evening. We head north for 14 miles following the Garmin’s directions. We pass several RV parks along the way and are already calculating a Plan B and a Plan C. Garmin has us turning east again for another 5 miles and finally we head north for 5 more before we turn into the driveway of West End RV Park in Weatherford. (I don’t know what it is west of!) 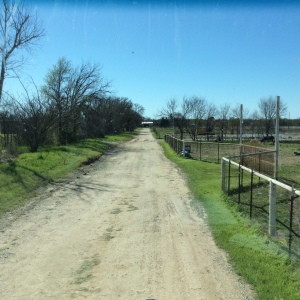 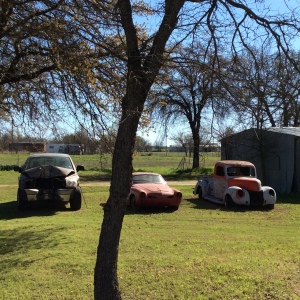 And finally we are greeted by several dogs running loose and a man who looks like he stepped out of a Larry McMurtry novel. This whole place looks like a scene from one of his novels!

The owner guides us into our spot and offers to help us hook up to 30 amps and water. Jeff pays him the $10 Passport America fee and asks him if he wants to see our membership card. He just smiles and says, “If you found us on Passport America and traveled all the way out here and still want to stay, that’s enough for me.” Then he adds, “I’ve never seen a gas motorhome that big.”

So here we are for the evening in another remote place. Roosters crow, dogs run loose, pickup trucks come and go. It’s wonderful!

The sun goes down.

The moon and Jupiter wink at us. (Look closely for the tiny white dot to the left of the moon.) We settle in for the night.

What’s What With Weatherford: