Heading west to the coast…

Bridge, Oregon is the next little community roughly 8 miles away.

in the meantime, Bridge became a stagecoach stop where horses were exchanged. By 1915 the town had a creamery, sawmill, gristmill, school, and a church. In 1940 the population totaled 39.  The church, founded in 1900, still exists today as the Bridge Community Church. (en.m.wikipedia.org)

Myrtle Point is another 9 miles west of Bridge. It’s a small city of less than 3,000 but it is our nearest grocery store, hardware store, dentist, and hair salon. It is 15 miles from the Pacific Ocean. (en.m.wikipedia.org) 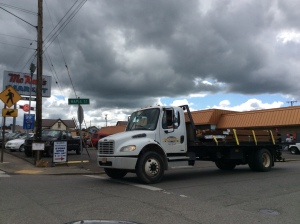 Coquille is the next stop along Highway 42, 9 miles from Myrtle Point.

Named after the River which borders this small city and the tribe of Native Americans who first settled here, Coquille’s economic base is the timber industry. (en.m.wikipedia.org) 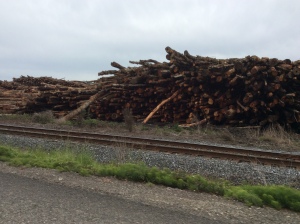 Coos Bay is a city about 18 miles north of Coquille along Highway 101, where the Coos River enters the bay on the Pacific Ocean. Bordering North Bend, the two cities are often referred to as the Bay Area and, with a combined population of around 16,000, Coos Bay-North Bend is the largest city on the Oregon coast. The bay itself, is an S-shaped inlet 10 miles long and 2 miles wide. 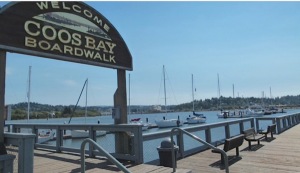 Thousands of years ago members of the Coos, Coquille, Siuslaw, and Umpqua tribes lived here to hunt, fish, and gather. In 1579 Sir Francis Drake supposedly came here seeking shelter with his ship, the Golden Hinde.

The earliest settlement of European Americans, called Camp Castaway, was established in January of 1852 by the survivors of the shipwrecked schooner, Captain Lincoln, en route from San Francisco. (en.m.wikipedia.org)

So, you get a better picture now of where we are staying through mid-September. Isolated, yes, but rustic, rural, and beautiful as well. We still have lots to discover and learn. For example, we have yet to explore one of the roads off of Highway 42. And some weekend we plan on traveling up the mountain side when no logging trucks come barreling out of the forests, and all we have to avoid are the hunters.

The only downside for me is that there is nowhere nearby where I can take my 5 mile walks. I walked to the covered bridge and back on Highway 42 once, praying I wouldn’t become roadkill each time a logging truck sped by me. The worrying defeated the purpose of my exercise. So, I am now resigned to taking it easy for the next few months and embracing the beauty and challenges of my remote RV lifestyle, pun intended!

One thought on “Beyond Remote”