We have time for another day of sightseeing and a day of just basking and gazing in our little world in the national forest before heading to the Gorge area.

While I was in Govy I did some info sleuthing at the Museum and Cultural Center. (I was parked for over an hour in front of the museum, blogging, posting, and uploading pictures and considered a visit my civic duty as a tourist. Besides, the air conditioning and bathroom would offer me some relief. 😬)

The gift shop is not tempting but the racks of brochures outside the restrooms are calling my name! I leave with a short stack of pamphlets about Mt. Hood National Forest, the Columbia Gorge, and the Oregon coastline.

Then, as I get in my car, my nose leads me to a food truck parked on the side of the museum… Wabi Sabi… rice, noodles, and sushi.😋🍚🍜🐟❣

I return home and anxiously plan a final outing of gazing and grazing that will be amazing.

So I am in charge of our Friday outing. Once again we head to Govy on Highway 26. As we head out of the campground onto Highway 216 we are surprised by a coyote running across the road. So cool!

Our first stop is Trillium Lake,  a very popular recreation area and campground 2 miles off the highway and about 4 miles outside of Government Camp.

You guessed it… The lake is well-known for its scenic views of Mt. Hood. And even without the mountain in the background, it still takes a beautiful picture.

The lake is named for its abundance of trillium flowers.

Of course we don’t see any because the plant is dormant in the hot summer months. (portlandnursery.com)

According to en.m.wikipedia.org, the lake was created in 1960 by the Oregon Department of Fish and Wildlife by forming a dam on a tributary of the Salmon River. The area where the lake now stands was once a log road over marshes, part of the Oregon Trail.

Our second stop is Timberline Lodge, a 6 mile ascent off the highway and just outside of Govy.

As we reach the top, the trees thin out and the view opens up. 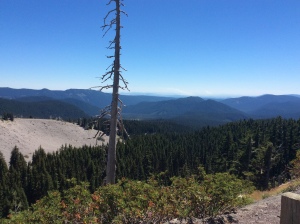 The ski lift sits idle until the winter brings skiers and snow boarders. It’s too crowded to take good pictures. We see the lodge from the side but the lot is packed and there is an attendant turning cars away. So I do the next best thing and get a pic from the Internet.

Did you know that the Timberline Lodge is the one used for filming the exterior of the Overlook Hotel Jack Nicholson bought in The Shining? It is also featured in Reese Witherspoon’s trek along the Pacific Crest Trail in the movie, Wild. 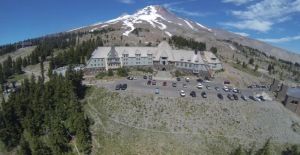 Residing on the south side of Mt. Hood at an elevation of 5,960 feet, the lodge was constructed from 1936 to 1938 by the Works Progress Administration during the Great Depression. Local residents built and furnished the original structure. (en.m.wikipedia.org)

Our last stop is just down the mountain in Govy at the food truck, Wabi Sabi.

Saturday we just relax and enjoy the solitude. The campsites are all full now but you wouldn’t know it. It is so quiet and peaceful here. I take a few last pictures. First I say goodbye to the bees.

Then I introduce myself to our closest neighbor. 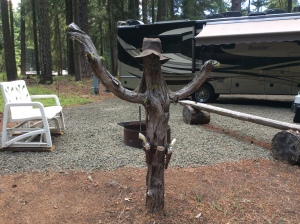 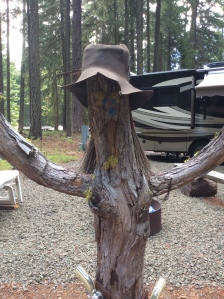 The evening ends as we listen to Fresh Air, the Moth Radio Hour, and Think Out Loud on NPR. (Yes, OPB came in pretty clear so we had the radio, our books, and the game apps on our phone to keep us company.)