We leave Mount St. Helens and Washington on Sunday, the 21st and start inching our way down the Oregon Coast on Highway 101 from Astoria (mile 3) to Seaside (mile 20) where we spend the next 3 nights at Circle Creek RV Park.

Today we backtrack north to explore Astoria and stop to visit the Astoria Column.

But before we even begin ascending the 164 steps up the spiral staircase to the observation deck, we gaze out at the mouth of the Columbia River. (visittheoregoncoast.com)

On November 7, 1805 Lewis and Clark saw their first glimpse of the Pacific Ocean along this same area. (plaque at site)

So we head up the Astoria Column, a concrete and steel structure built in 1926, to get a panoramic view of the river meeting the sea. The frieze on the outside is a mural depicting 14 significant events in the early history of Oregon and Astoria. (en.m.wikipedia.org) 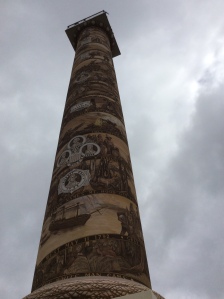 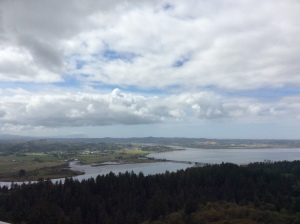 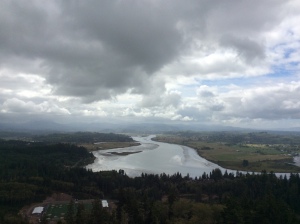 Back on the ground again, I am intrigued by a colorful canoe perched on decorated stucco beams.

Thinking it has something to do with Lewis and Clark, I walk down and learn that it is a memorial dedicated to Comcomly, a Chief of the Chinook Nation, who is estimated to have lived from 1765 -1830. 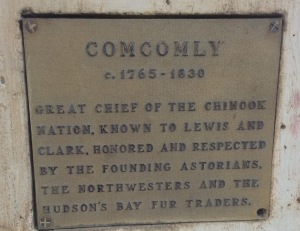 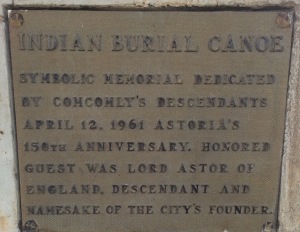 I stand here in awe as I take this all in. Explorers, Native Americans, European settlers… so much history in front of me that makes so much more sense as I view it through my own eyes, and can now better imagine what it looked like through the eyes of history’s primary recorders!

The city of Astoria is the oldest American settlement west of the Rockies. This cozy little sea town rests on the mouth of the Columbia River and was the backdrop for the 1985 movie, “The Goonies.” A popular place for fish and chips is a local food “ship”, the Bowpicker. (visittheoregoncoast.com) Unfortunately it is closed on this Monday.

Warrenton (mile 6.5) is our next destination. We head further west of Highway 101 to Fort Stevens State Park in Clatsop County named after Fort Clatsop where Lewis and Clark camped through the winter of 1805 -1806. (visittheoregoncoast.com)

Fort Stevens, built in 1863, guarded the mouth of the Columbia River until 1947. In June of 1942 a Japanese submarine fired 17 shells from its deck, making Fort Stevens the only military installation in the continental United States to come under enemy fire during World War II. (en.m.wikipedia.org)

Today Fort Stevens is a State Park in Oregon featuring a variety of habitats including spruce and hemlock forests, 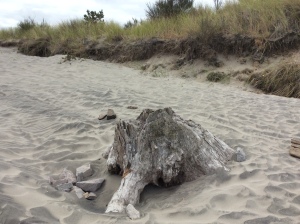 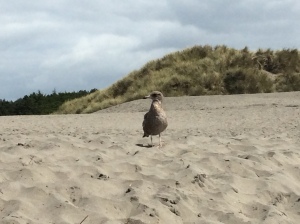 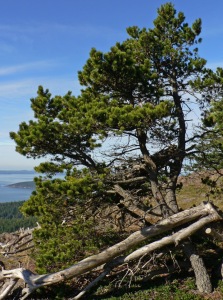 and of course, beaches. 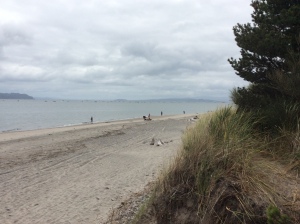 Speaking of beaches, the ruins of the shipwrecked “Peter Iredale” are a short walk away from one of the parking areas.

Built in Liverpool, England in 1890, the “Peter Iredale” was a 4 mast sailing ship fashioned from steel plates on an iron frame. (en.m.wikipedia.org)

“On October 25, 1906, with an empty cargo hold and only 28 days out of Salina, Mexico, the Peter Iredale ran aground. Bound for Portland and a new load of cargo, Captain H. Lawrence offered his crew a bonus if they cut 5 days off the normal sailing time.”

Before reaching the Columbia River, however, the ship encountered a strong storm with gusts of wind that eventually pushed it into the surging waves breaking on shore. The bottom of the ship raked the sand and crashed. Miraculously, no lives were lost. The remains are now a popular tourist attraction.  (plaque on beach) 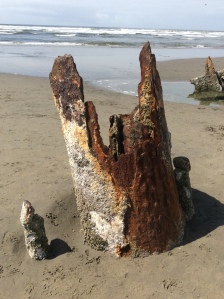 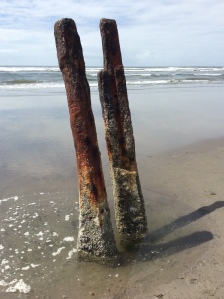 According to oregonhistoryproject.org, one of the rescuers “remembered that the red-bearded captain stood stiffly at attention, saluted his ship, and said, ‘May God bless you and may your bones bleach in these sands.’ Then he turned and addressed his men with a bottle of whisky in his hand. ‘Boys,’ he said, ‘have a drink.‘ The British Naval Court later ruled that the sudden wind shift and the strong current were responsible for the stranding of the ship…”