Ecola State Park stretches 9 miles along the coast between Seaside and Cannon Beach. The entrance road escorts us through a forest of spruce trees and opens up to a grassy bluff with stunning views of the Pacific Ocean. (oregonstateparks.org) 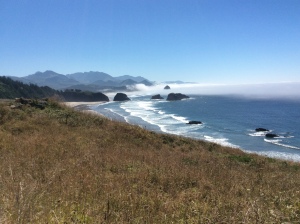 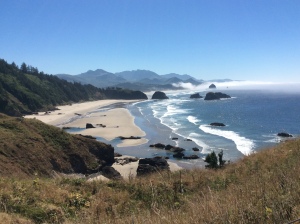 The name “ecola” evolved from the Chinook word, “ehkoli”, which means “whale.” In January of 1806 William Clark traveled 20 miles south to the mouth of a creek where members of the Tillamook tribe were rendering fat from a beached whale. He bartered for blubber and whale oil and applied the name “ekoli” to the creek. (en.m.wikipedia.org)

Cannon Beach is a kitschy artsy community a short drive off Highway 101. The streets are lined with restaurants, boutiques, galleries, and of course cars. 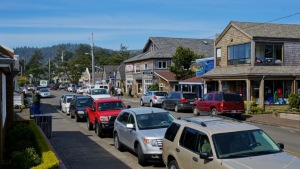 Prior to 1964, the 101 ran through the town. An earthquake in Alaska, on March 27th, produced seismic waves that flooded  the beach and washed away the highway bridge, isolating the city from the coastal road. (en.m.wikipedia.org)

In 1846 a cannon from the shipwrecked USS Navy schooner Shark, washed ashore in the area now named Cannon Beach, hence the origin of the name of the town and this section of the coastline. (coastexplorermagazine.com) 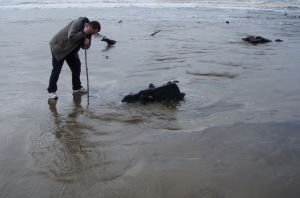 The man in the picture above is looking over the first cannon. The second one is on the right in the background. Both are believed to be from the Shark. (cbhistory.org)

Whether you visit the town or beach or both, finding a place to park is problematic. Of course, with our tiny car, we have an advantage and can squeeze into very compact spaces. At last we park, walk, and descend onto

It’s a cool, sunny, and windy day. The sand is thick so walking is a sinking down pulling up process repeated with every step. It makes me giggle and feel off-balance.

Looking north, Tillamook Head and Tillamook Rock Lighthouse can be seen in the distance. 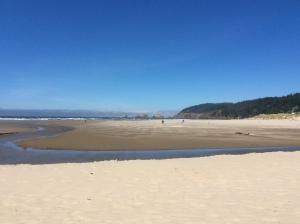 Tillamook Rock and Lighthouse are out there, believe me!

A close-up of Tillamook Head… 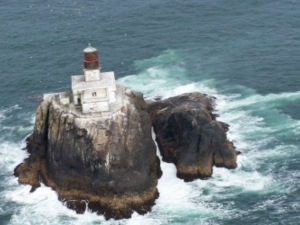 Haystack Rock rises 235 feet above the shoreline. At low tide you can walk up to this monolith and observe starfish, anemones, crabs, aquatic snails, and more tide pool creatures. (visittheoregoncoast.com)

Haystack Rock is just one geological episode in the history of Oregon’s coast shaped millions of years ago by lava flows. (cannonbeach.org) 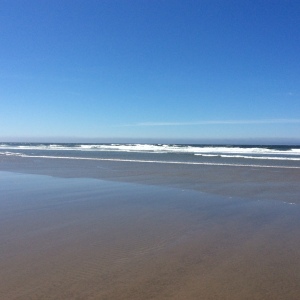 Looking down, are washed up mussel shells

and sea rivulets through the sand.

As we drive away from the beach we drive into the residential area and I snap this photo of Haystack Rock, a front room view from several houses.