is named after William Charles Depoe, a member of the Siletz culture. He and his wife, Maltida, owned land here in the 1890s until their heirs sold out to a town developer. 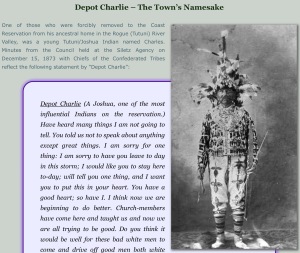 Check out this link at centralcoastjournal.com to find out more about Charlie and his descendants and their contributions to Depoe Bay. It’s a concise and well-written historical account.

This fishing village is famous for whale watching and for its iconic bridge crossing a channel dividing the harbor from the ocean. 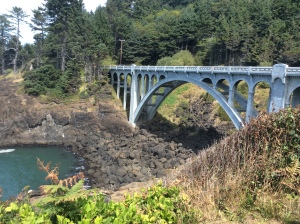 Designed in 1927 by C.B. McCullough, the bridge made a cameo appearance in the movie,”One Flew Over the Cuckoo’s Nest.” (visittheoregoncoast.com) Remember the scene in which Jack Nicholson escapes with a group of misfits from the mental hospital and they take a fishing boat out for a joyride?

After crossing the bridge we stop to take pictures of the water, waves, and rocks from the Otter Crest Loop Drive, a 3 mile scenic detour along the Old Coastal Highway. 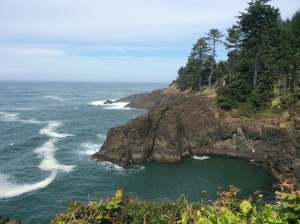 We notice a White House with a red roof on top of a cliff overlooking the ocean and wonder who lives there. What a fantastic view!

A few minutes later we discover the house is an historical marker and gift shop for Cape Foulweather.

The cape itself is an outcropping of basalt rock rising 500 feet above the sea. It was first sighted and named by Captain James Cook in 1778 on his 3rd voyage around the world. (en.m.wikipedia.org)

The views from up here are awesome.

The curving rings of rock seen below

are ring dikes created by lava 15 million years ago.

We are mesmerized while gazing into the deep blue waters of the Pacific Ocean. Then we notice mists of water spraying upwards and delight in watching whales spouting. I take a picture of where we spot them. 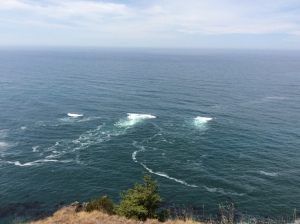 Gull Rock, shown here, is a breeding and nesting ground for six species of marine birds, including murre and cormorants. It is also a haul out for harbor seals. (paulnoll.com) 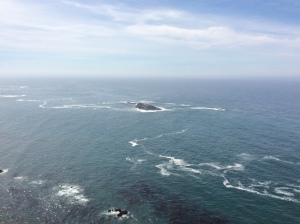 From inside the gift shop on the cliff I snap another picture of gull rock, 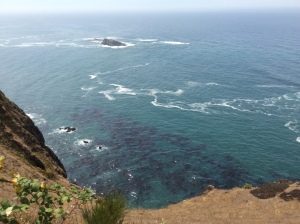 and then capture a view of the coast looking east.

According to visittheoregoncoast.com, “It was at this Point that Captain Cook first sighted the mainland of North America, on the Pacific Coast, and one of the sudden storms which greeted his arrival almost put an end to his historical expedition. The fierceness of the storm is reflected by the name he gave this rugged landmark – Cape Foulweather.”

One thought on “Depoe Bay”