Eighty-two miles south of Port Orford on Highway 101 lies Crescent City, CA. But 10 miles out of Oregon we take Route 197 along the Smith River to spend 3 nights at Jedediah Smith State Park, part of the Redwood National Park system.

These fluffy feather-like fronds greet us everywhere as we cross into California. We’re not in Oregon anymore, Dorothy! Notice the river in the background.

The Jedediah Smith Redwoods State Park protects 10,000 acres of ancient redwood groves where summer temps reach as high as 85 degrees and winters range between 30 and 65 degrees. Although snow is rare, an average of 100 inches of rain falls from December through March. (state park brochure)

The tree stump beside our RV is as long as our car! 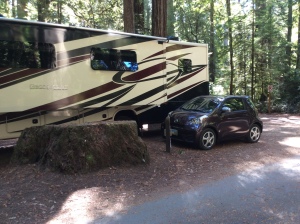 Coastal redwoods thrive in the lower elevations that bring mild temps, rainy winters, and foggy days. Trees grow as high as 350 feet with a base diameter of 20 feet. Their root systems are broad and shallow. Redwoods resist insects, fire, and rot and resiliently sprout back when cut or badly burned. (state park brochure) 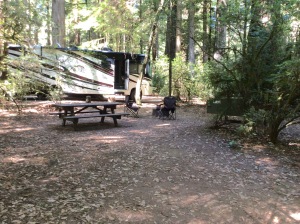 Jedidiah Strong Smith was the first non-native American to travel from the Mississippi River across the Sierra Nevada to the Pacific coast.

Jedidiah Smith’s wish was to be “the first to view a country on which the eyes of a white man had never gazed and to follow the course of rivers that run through a new land.” (state park brochure) 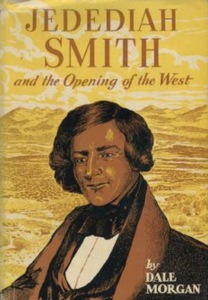 His story west begins in 1821 when, at age 22, he joined a fur-trapping party across southern Utah, Nevada, Arizona, and the Mojave Desert. (state park brochure)

In 1826 the Mexican Governor, Echeandia, ordered the fur-trappers to leave the area, so Smith and his party headed north. (state park brochure)

A year later, they were forced to move once again and he led his party even further north, along the coast’s redwood groves.

Unfortunately in 1831, Jedediah was killed in a Comanche ambush along the Santa Fe Trail. His 10 years of travel and discovery, however, left lasting reports on the geology and geography of the west and filled in many blank spaces on our country’s map. (state park brochure) 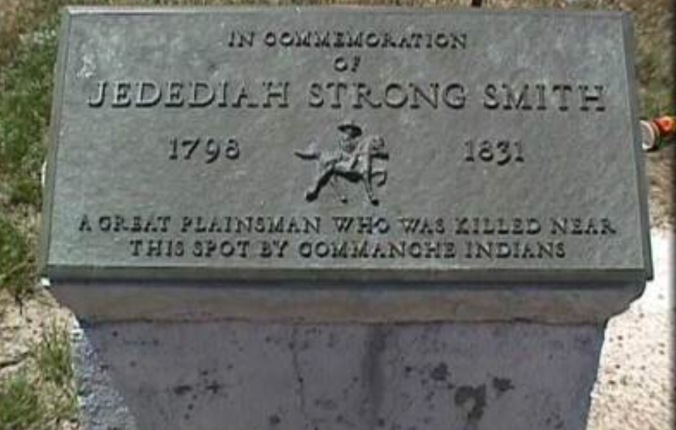