One mile north of Orick on Highway 101, there’s a turn-off onto Bald Hills Road. Two and a half miles later we cross under a walking bridge and arrive at a small parking area where creative parking skills and the ignoring of signs pack more cars in than there are spaces available. Luckily our car is small.

We leave Casey and Murph back in the RV because dogs are not allowed on park trails in the redwood forests for several reasons:

Fortunately dogs are welcome in campgrounds, picnic areas, public roads, and beaches. Below is a list of pet-friendly walks to take. Most of these are unpaved roads.

The Lady Bird Johnson Grove loops through a place where time is measured in centuries and millennia and takes us to the site where this First Lady dedicated Redwood National Park in 1968. Intensive logging from the1850s destroyed most of these majestic trees to where less than 4% of the old-growth forests remain. (Redwood Parks Association)

Notice the red sorrel and ferns growing in the under-canopy around these mushrooms.

Sempervirens means everlasting and is the scientific name for these coast redwoods, the tallest and longest living trees on our planet. Pictures just can’t capture what it feels like to gaze up in wonder! 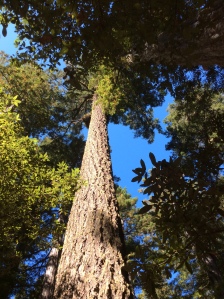 The tree below displays burls, clusters of bud material laying dormant beneath the bark. Remaining inactive for generations, these sleeping sprouts awake when the tree is stressed by low rainfall or fire, assuring the longevity of the redwood tree. (Redwood Parks Association)

Wildfires can hollow out a redwood. Its thick, insulating bark lacks the flammable resin found in other pines, firs, and spruce. Plus redwood sap is mostly water, slowing down combustion. Fires can burn repeatedly through cracks in the bark but leave the outside growing layers intact. The hollows left behind become shelters for animals. (Redwood Parks Association) 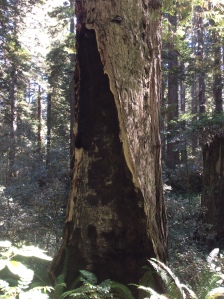 Jeff and I design our “tiny house” within this hollowed out trunk.

Logged, milled, and shipped elsewhere, the coast redwoods of northern California built the homes and infrastructure of our expanding nation since the middle of the 19th century.  In 1918 Save-the-Redwoods League was founded to purchase redwoods and convert the land to public trust. (plaque at dedication site)

Three redwood state parks were established in the 1920s with the League’s effort:

In the early 1960s a renewed effort began to establish a national redwood park. In 1963 a National Geographic survey team discovered several trees taller than any previously known. This ultimately led to the dedication of Redwood National Park in October 1968 by Lady Bird Johnson. (plaque at dedication site)