We get up early so that we can catch the sunrise and arrive here by 6:15 AM. 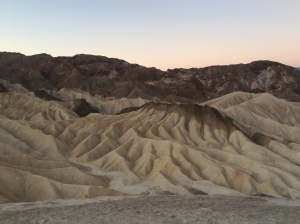 Already there are clusters of people gathered on this elevated overlook along the stone ledge.

As I walk around wedging myself in to take a picture and read the info on the plaques, I discover we are surrounded by visitors from other countries. I mean, no one around me is speaking English! But we all share the language of awe as we watch the maze of badlands before us reflect the sun rising behind us. 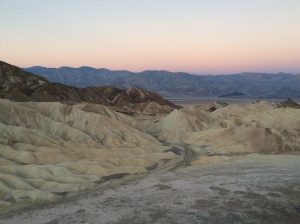 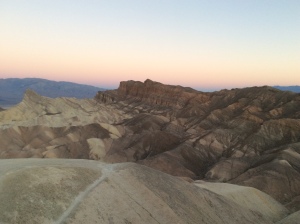 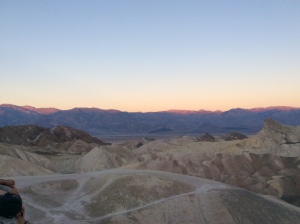 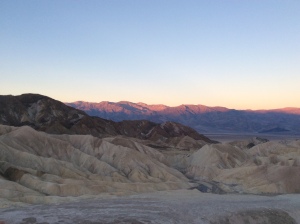 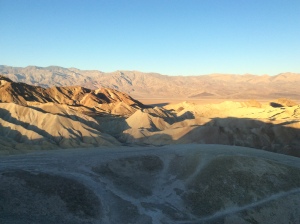 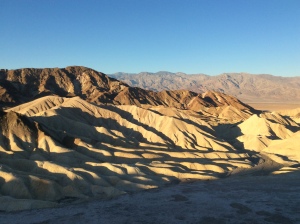 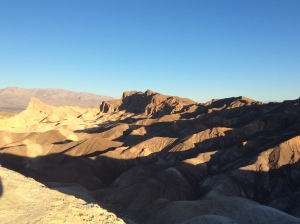 The plaque at Zabriskie Point describes these magnificent rock formations as otherworldly badlands.

According to worldlandforms.com, badlands are beautifully carved landforms that are barren, battered and eroded by water and shaped with the help of wearing and wind-driven sand and rain.

Clay, sandstone, and siltstone comprise the rock formations before us. Several million years ago lakes filled the valley below. Earthquakes washed silt and volcanic ash into the water creating thick deposits.  Volcanoes oozed a dark layer of lava  into the lakebeds and the hot water that followed the eruptions washed down colorful striations of minerals. More seismic activity uplifted and folded the layers of sediment.  Rain then eroded and sculpted the formations into the chaotic and beautiful landforms we see today. (plaque at Zabriskie Point)

So, who is Zabriskie?

Christian B. Zabriskie was VP and General Manager of the Pacific Coast Borax Company from 1897 until he retired in 1933. (nps.gov)

Borax is a mineral found in the lakebed deposits of Death Valley, a combination of colemanite and uluxite, and discovered to be worth mining in 1882. For 6 years 20-mule-team wagons actually did haul the borax out of Death Valley and the name stuck. (plaque at Zabriskie Point)

Unfortunately the mining process left a devastating impact on the natural landscape.

Early environmentalists successfully protested the effects of borax mining in the 1920s. Under the direction of Zabriskie, the company invested in tourism on their property by opening Furnace Creek Inn in 1927. In order to attract visitors to the Inn, preserving the natural landscape of the desert became a priority. In 1933 all mining ceased and Death Valley became a National Monument and in 1994, a National Park. Zabriskie is credited for this transition from mining to natural wonder. (plaque at Zabriskie Point)