In late February most of my homeless friends left the Riverwalk when the 3 wrought iron benches between Limited Avenue and Graham Avenue were removed by the city. 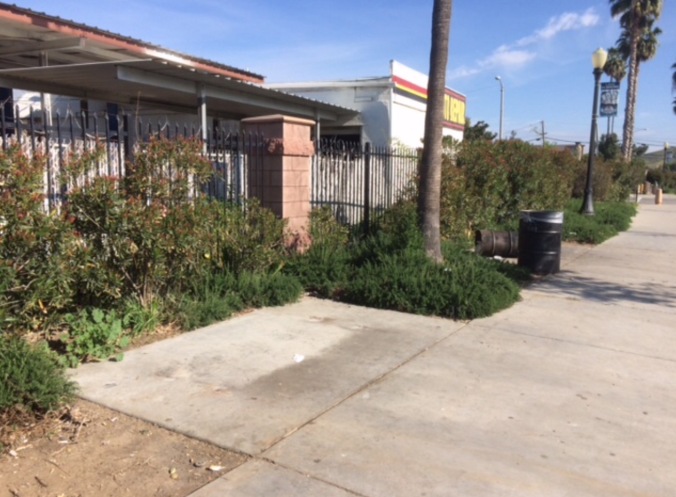 I miss them. They added local color, smiles, an exchange of some Spanish words, the appreciation for a new day, and a blessing. Sure, there was a litter of trash and blankets and plastic bags, but where we live, off Riverside Drive, litter is a norm.

The old Mexican man with the cane moved across the street between Graham and Heald Avenues. 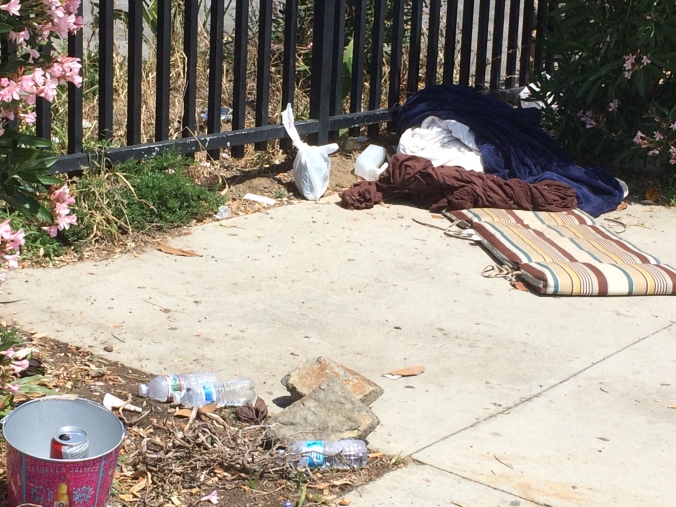 He was the homeless “elder”, always surrounded by a few local groupies. For awhile I still saw him and his posse sitting on the rocks at the edge of the Riverwalk. Then I would walk past him as he slept on cushions hugging the right side of the path. (Out of respect for his dignity, I never took his picture.)

I knew “My Friend”, the woman with the red hair and deep voice, and her boyfriend were looking after him during the day and helping to replenish his blankets and coats that were thrown away when the Riverwalk benches were removed.

And then I didn’t see him.

The last time I saw him “My Friend’s” boyfriend was pulling him on a cushion onto the Riverwalk. Concerned, I asked if he was okay. The boyfriend nodded and gave me a thumbs up.

UPDATE: The old man is in a nursing home somewhere. My Friend’s baby is due in 2 weeks.

A few days later I run into my Mexican friend, the man with the kidney transplant, across Sumner Avenue, beside the Pottery Court Apartments. He warns me about the 2 pit bulls who just charged at him from under the fence. Scared, he turns back. 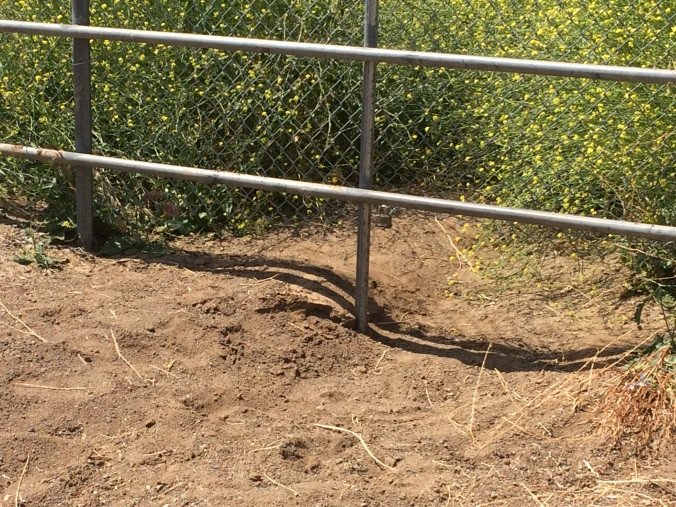 About a week ago when Jeff accompanied me on my walk, we saw 2 black pit bulls with red collars behind the chain link fence as we were about to cross Chaney Avenue and head toward 74.

As we returned and crossed Chaney again, we caught sight of the same 2 dogs staring at us up against the chain link fence from the other side of the Riverwalk. Jeff picked up a big rock for protection. The hairs on my skin prickled and I kept looking back at the dogs who remained staring at us.

So, with my Mexican friend at my side, I call the Lake Elsinore Police Station and explain the whole situation. Ironically, the most difficult part is trying to provide the exact location on the Riverwalk. I’m told to call 911 and Animal Control, but then the dispatcher finally locates the incident at Poe and Flint. My friend and I walk toward the open chain link fence and wait for the police to arrive.

In the meantime, my other friend who walks from Chaney to Sumner everyday approaches us in the opposite direction. (Does this make sense?) I shout a warning and he slowly approaches. The 3 of us share our pit bull stories. He too has been spooked by these loose dogs. Finally, the police and Animal Control arrive, but all 3 of us cut our walks short.

The next time I encounter my friend, who walks from Chaney to Sumner and back again, he tells me that the 2 dogs were lose again recently prompting him to also call Animal Control.

So, who is responsible for these dogs? All I know is that behind the chain link fence there is a car, a truck, an RV, and signs that people live behind the cover of the bushes and trees. 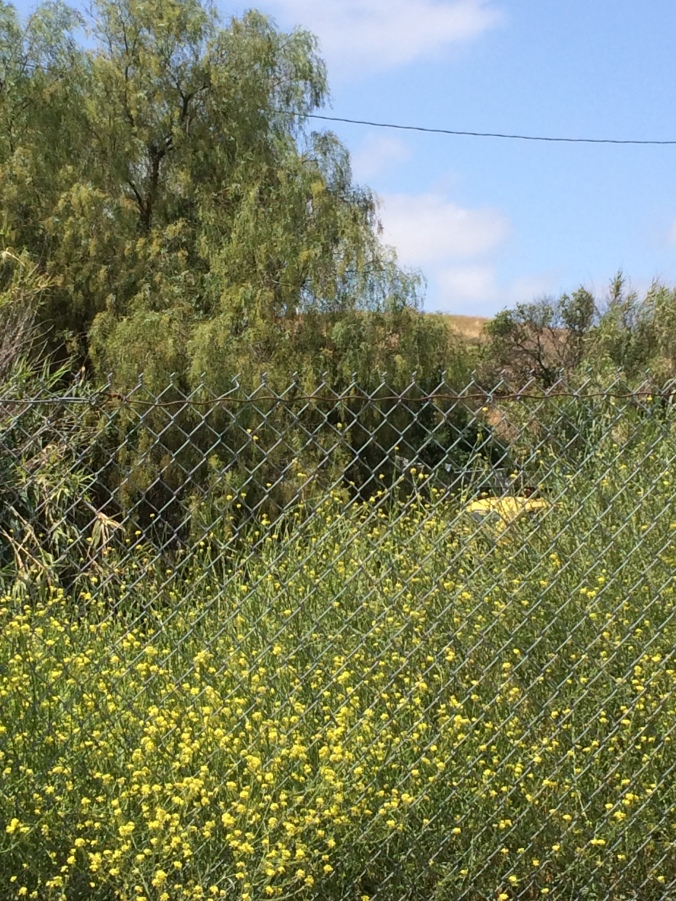 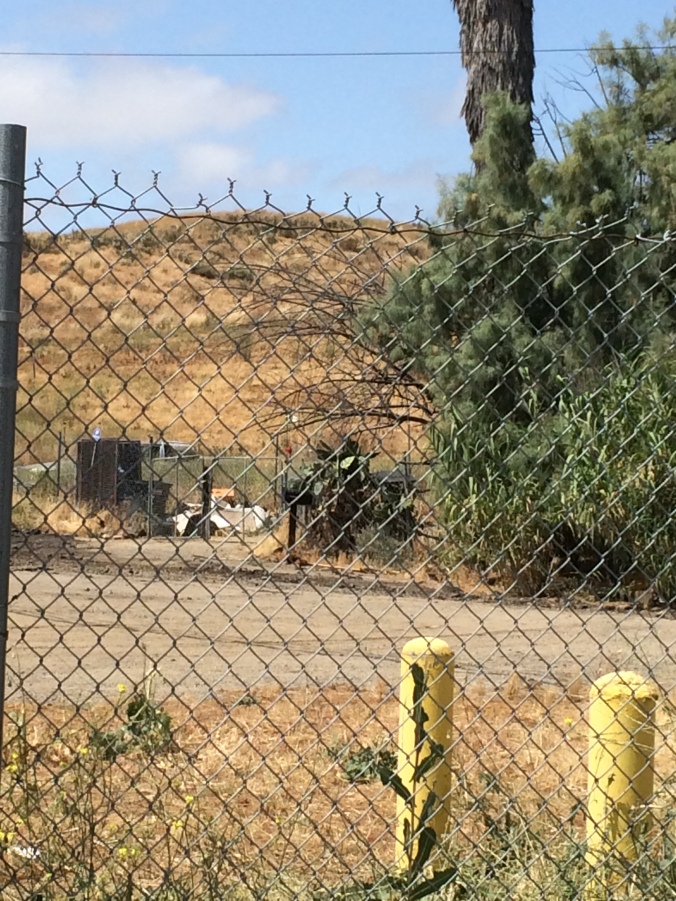 UPDATE: The other day I was walking the Riverwalk alone when  the 2 black pit bulls with red collars were standing and staring at me from the other side of the chain link fence. Wait, they had a friend with them this time! My heart almost stopped. I walked by and turned around. All 3 dogs were on the Riverwalk! The next time I turned around they were gone. I called Animal Control and kept walking the last mile to the 74 giving me 2 miles to compose myself, find a stick, and gather the courage to pass by them again. I called Jeff and kept him on the phone as I returned to the sighting area, although he told me later that he didn’t want to hear me getting attacked. I made sure to tell him I loved him just in case…

I guess you could say the Riverwalk is going to the dogs. (Woof!)

And finally, as Jeff and I were approaching the end of the Riverwalk one day, we met 2 women from the Mosquito and Vector Control Association of California. 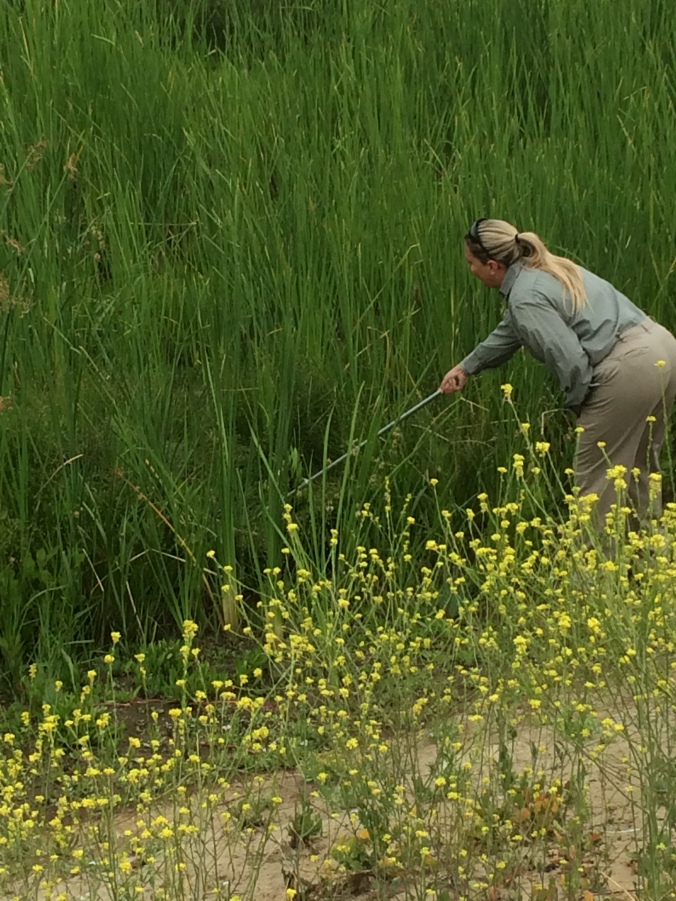 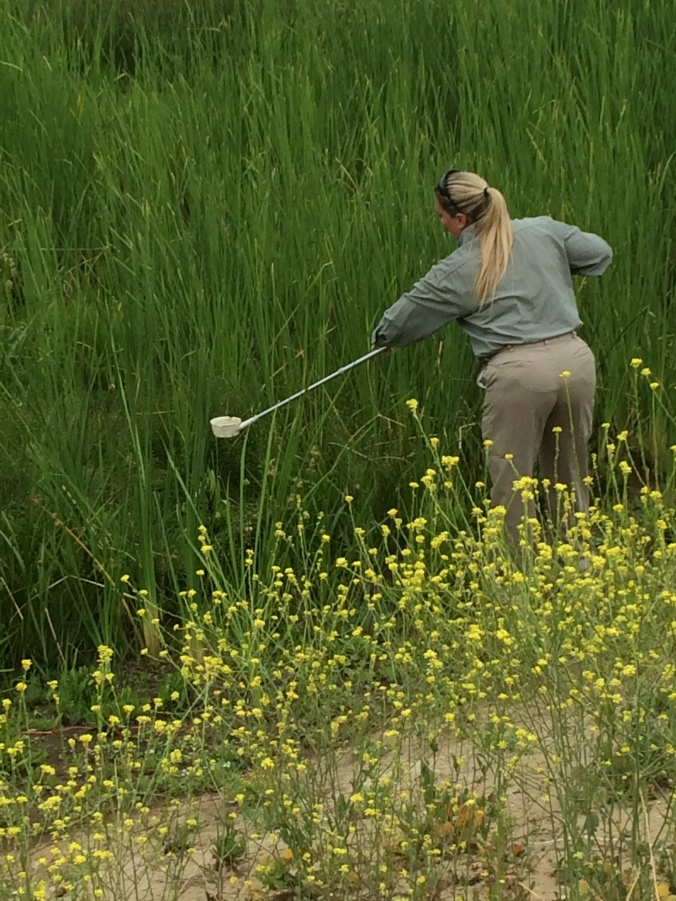 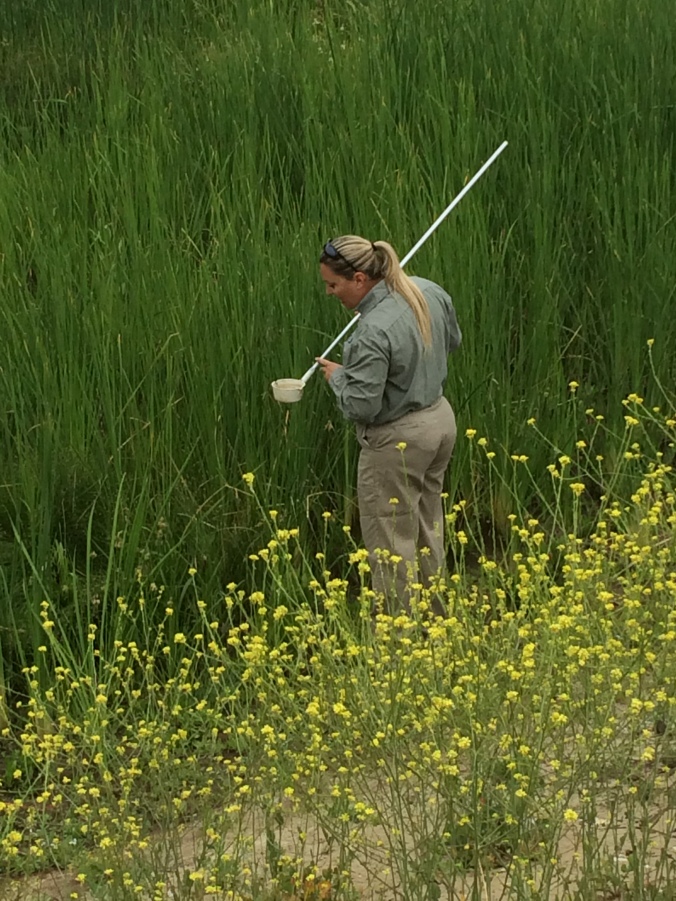 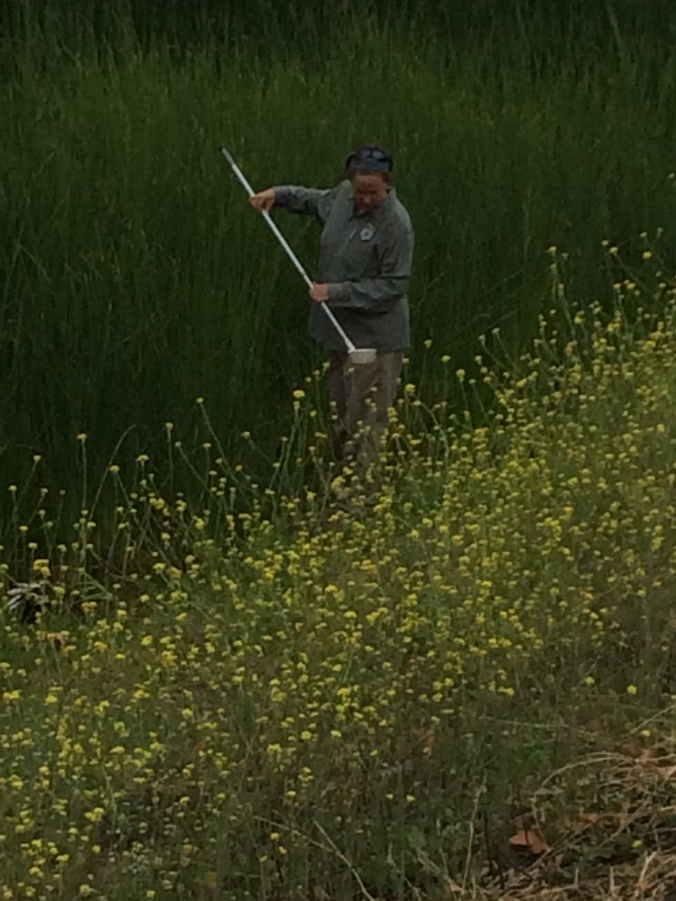 They were taking samples from the Temescal Wash. (And getting a little exercise as they walked to Chaney Avenue and back.) Then they showed us the dipper up close. Notice the tiny fish inside they fondly refer to as a mosquito fish. I’ll bet you can guess why… 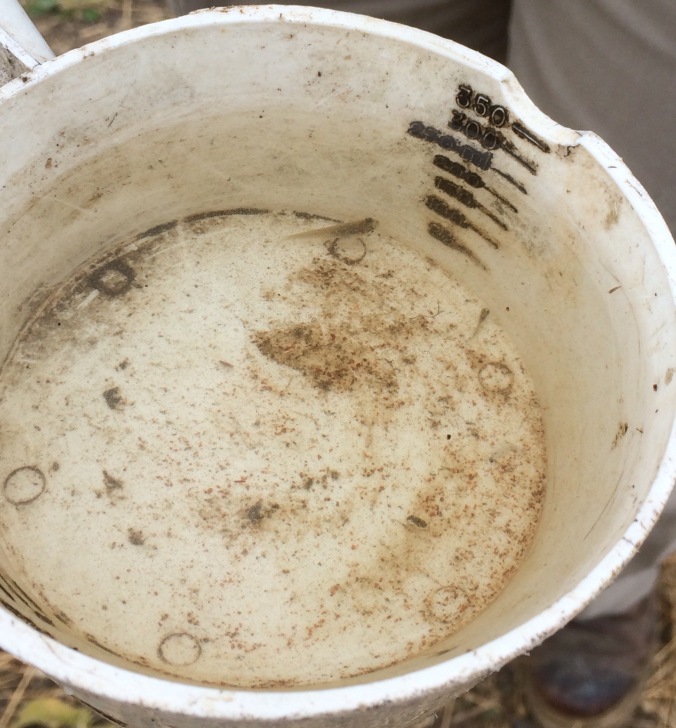 There’s always something happening on the Riverwalk!