Getting ready to leave this morning was easy.

Since we didn’t have to back-in to our space to hook up to electricity and water, we could leave the car and tow attached and we didn’t lower the jacks to level off.

We emptied the trash, wiped off the few dishes we used with a paper towel and put them in the sink, swept and “swiffered” the floor, secured the few cabinets we used, pulled in the slides, unplugged, disconnected the water hose and took off. After topping off the gas tank we hit the road.

Since we are destination-minded on this trek, there’s not much to see traveling through the Joaquin Valley of sun-bleached, dry,  and flat grasslands, scattered with plush green carpets of crops here and there.

For the first few hours we pass grapevines and groves of almond, pistachio, and citrus trees.

We pass through Avenal, the pistachio capital of the world, according to the sign as we blinked past an exit that looked like it led nowhere.

To the east of the 5 there are canals and aqueducts to irrigate crops.

But along dry patches, signs keep popping up like the ones below:

Today a truck hauling garlic bulbs passes us and I scramble to take a picture before it drives too far away.

Yesterday a similar truck carrying white onions sped by but I wasn’t quick enough to get a pic.

As I switch the map of California over from the southern side of the state to the northern side, we smell a ripe tangy stench. And the smell gets stronger and more potent with each rotation of our wheels. It’s the all-American scent of good natural fertilizer… cow manure.

On the map it is just above coordinate 12 in the San Joaquin Valley at the intersection of Interstate 5 and California State Route 198.  (Why I underline and show the map will make sense as you read further.)

Just outside my window there are cattle everywhere… eating, roaming, resting. There are no herds grazing or pastures of green grass. I don’t see any barns or silos or farmhouses. These cows don’t look like dairy cows. This looks like the serious business I think it is and I cannot bring myself to take a picture.

Later, I search Google for “ca cattle ranches interstate 5” and bingo! Up pops Harris Ranch on Wikipedia. (Now is the time to remember the underlines and the map.)

What we are smelling and observing are the over 800 acres of the Harris Ranch feedlot, California’s largest producer of beef and the West Coast’s largest cattle ranch, where over 100,000 cows are “finished” for slaughtering. Finishing refers to quickly fattening up each animal in order to increase the amount of meat produced. (en.m.wikipedia.org)

I know meat-eating and slaughtering animals are debatable topics. You can be sure that the Harris Cattle Ranch has had both verbal and physical attacks. Some critics have nicknamed the feedlot Cowschwitz but Temple Grandin, the animal behaviorist expert who created a more humane system for slaughtering cows, says the company actually does a good job keeping their animals. (en.m.wikipedia.org)

I don’t eat much beef and when I do I only see it in a package or as a burger. But seeing the cows in the feedlot makes me feel bad for my occasional indulgence. (And I know that I have indeed eaten one of those cows in that lot because I read that the Harris Ranch provides all the beef for In-N-Out Burger and Jeff and I ate there after our hike in Idyllwild.)

As we approach Los Banos, the scenery starts to perk up a bit.

Mountains and hillsides appear to the west and the smell of cow dung resides. We travel by exits for cities like… Santa Nella Village, Gustine, Newman, and Patterson… instead of exits for connector junctions.

Soon we are in civilization again and some congestion as we drive through Stockton and Sacramento.

As I’m on the phone, checking for a place to pull into for the night, I see a golden bridge. No, not arches, but a bridge. 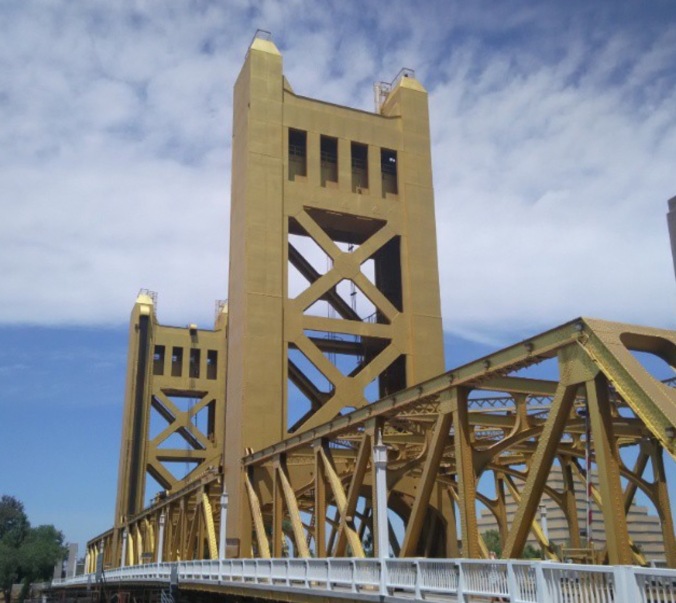 This structure is the Tower Bridge crossing the Sacramento River connecting Yolo County, where West Sacramento lies, to Sacramento County, where the capital city itself is located. From the picture below you can see that it is a vertical lift bridge.

The Tower Bridge was dedicated in December of 1935, replacing the old M Street Bridge of 1911. Its style represents a rare use of Streamline Moderne architecture, a late type of Art Deco that emerged in the later 30s. In 1976 it was painted this yellow-ochre color to match the gold leaf cupola of the State Capitol. (en.m.wikipedia.org)

We end the day at Happy Time RV Park in Dunningan, just off the 5, after traveling 278 miles.

I know it doesn’t seem like a long day on the road, but that’s how we roll. Towing a car on a dolly behind the RV means we safely drive the recommended speed of between 55 and 60 mph, slow and steady.

2 thoughts on “Traveling Through Central California”