There are no fast food or restaurant chains in Port Orford. And while I am not a big fan of eating out, Jeff really enjoys being wined and dined and served a meal cooked by someone else. So, I decided to make Jeff a happier camper and have some fun with the challenge of trying to sample something from all of the dozen or so places that serve food in Port Orford.

Agates is on the corner of Highway 101 and Madrona, a 1/2 mile from Port Orford RV Village where we were staying at the time. We carried-out.

We ordered the Chef’s Favorite, a white pizza pie with Mozzarella, spinach, bacon, and Gorgonzola cheese. 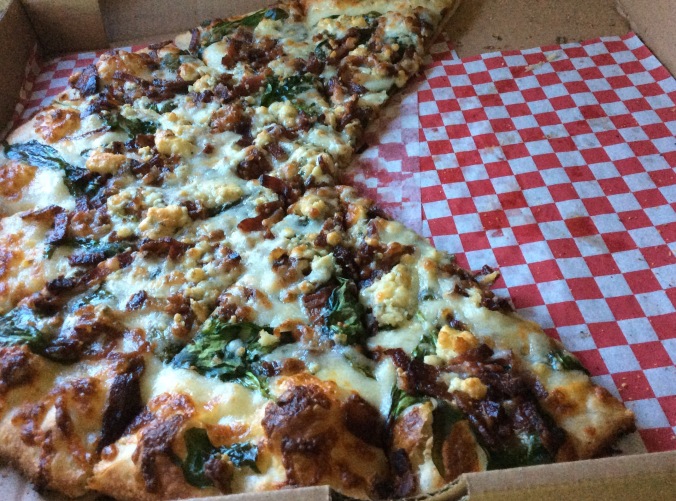 It was delicious! The thin, crispy crust complimented the crunchy bacon on top of a layer of creamy, cheesy, fresh Mozzarella dotted with sautéed spinach and Gorgonzola. The cheese, however, was just a bit overpowering, if you are not a big fan of bleu cheeses.     🍴    🍴     🍴     🍴 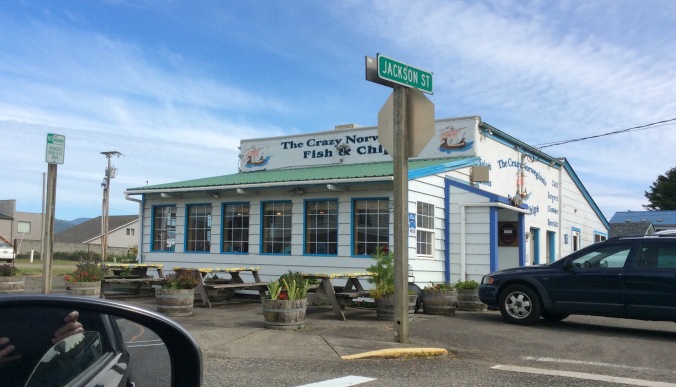 The Crazy Norwegian is known for its fish and chips which we carried-out last year and once this year already. Their clam chowder is excellent too.

But we had never eaten-in until now. They were on a wait so we walked up the street to catch an ocean view and a glimpse of the other side of Battle Rock. 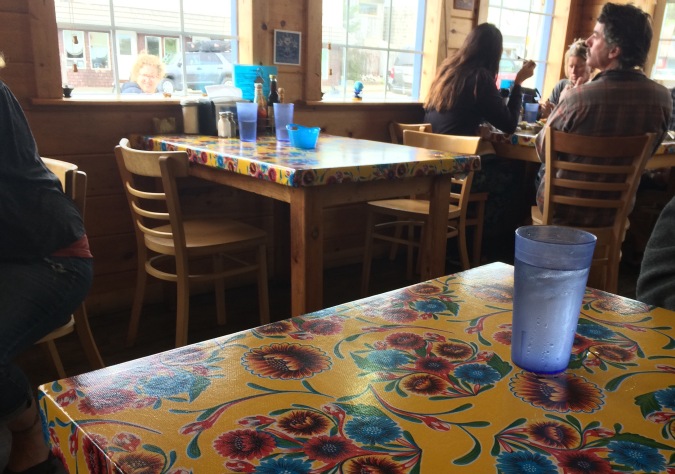 We ordered an appetizer of crab cakes with remoulade. 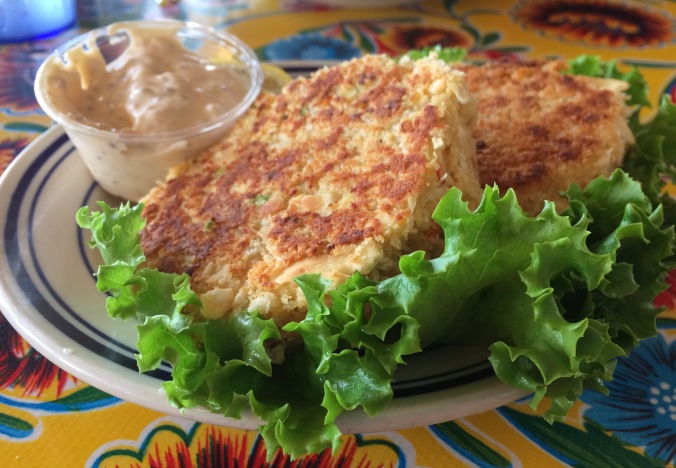 They were delicious! …2 large, thick, crispy patties filled with a soft interior of spicy goodness served with aioli. 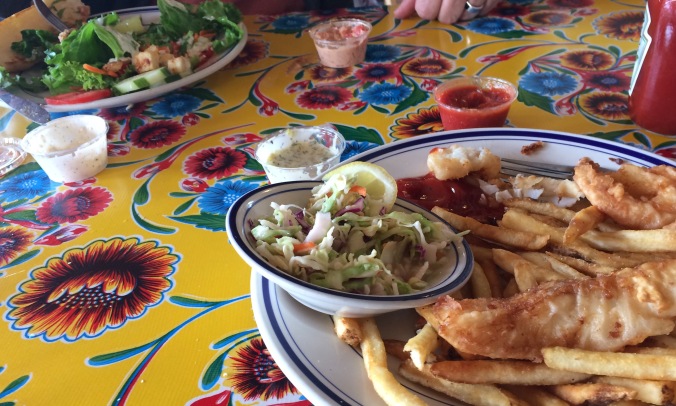 For our main courses… Jeff ordered the Oyster Po’ Girl, fried oysters on a hoagie bun topped with a special sauce and a side of green salad. I ordered the cod and shrimp combo with fries and slaw. We shared the salad, fries, and coleslaw.

Unfortunately, the oysters were a bit soggy and not crisp enough. The salad was fresh and crunchy. My fish was delicious, dipped in a light tempura batter and fried golden brown. 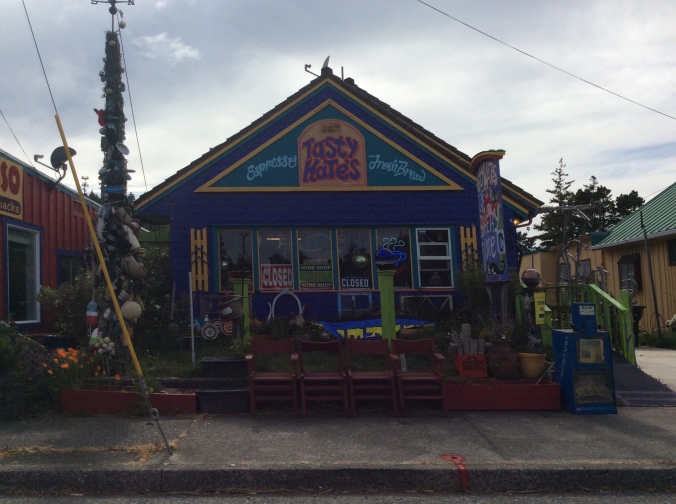 Tasty Kate’s is an inviting and colorful coffee house with homemade bread specialties, wines, and an eclectic assortment of gifts, decorations, and ocean memorabilia.

Kate bakes her goodies every morning. We bought a loaf of garlic sourdough bread to enjoy with dinner, toast for breakfast, and slice for an afternoon sandwich. 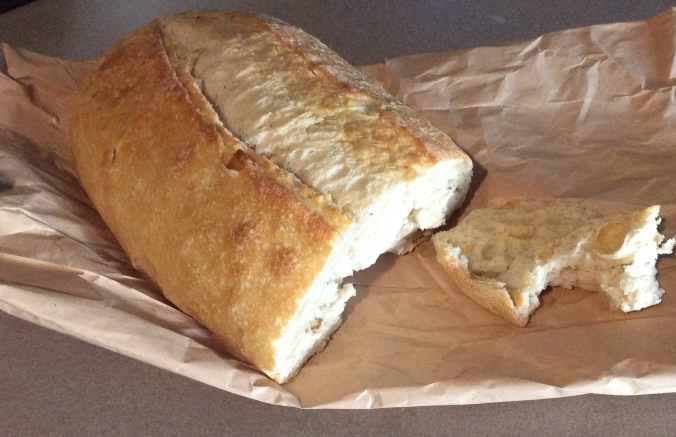 Awesome! Crunchy on the outside, soft and flavorful inside with hidden cloves of roasted garlic. So yummy!

Griff’s on the dock 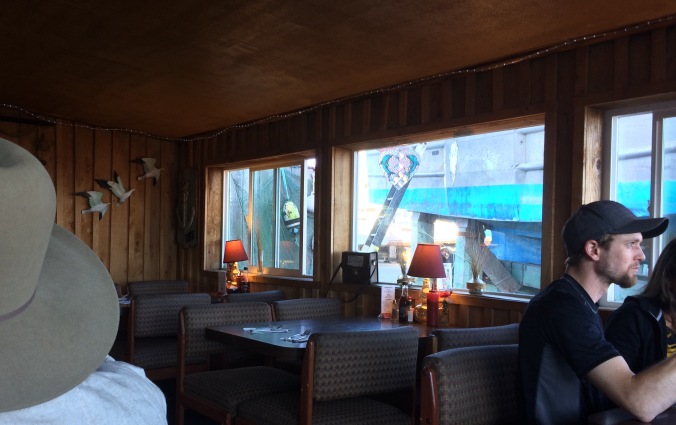 For an appetizer we enjoyed the fried scallops, of which I neglected to take a picture because we ate them up so fast.

Jeff ordered the lingcod special, the fresh catch of the day. It was a perfectly prepared broiled filet, served with a salad and baked potato. 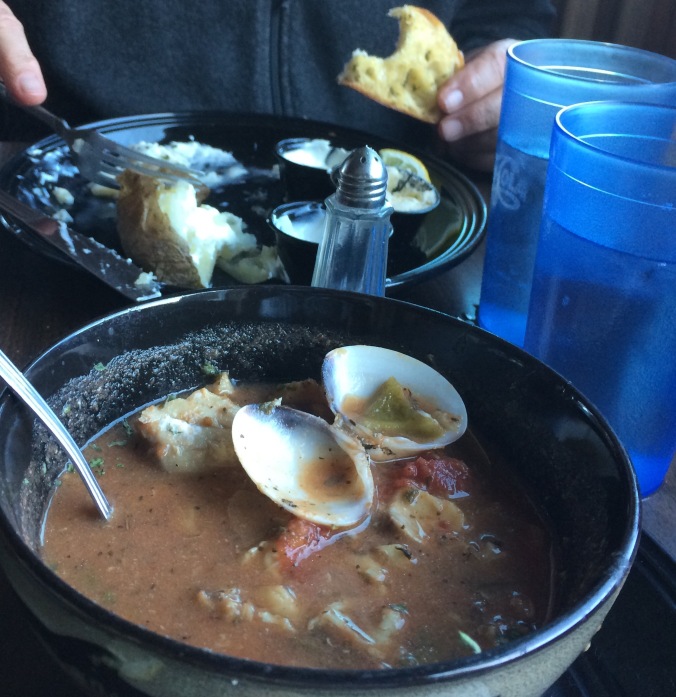 I thoroughly enjoyed a bowl of cioppino, a lighter version of the classic tomato-based fish soup. Served with garlic bread, my soup was filled with crab, shrimp, scallops, and the fresh fish of the day… lingcod. OMJeezlouise!!!  🍴     🍴     🍴     🍴     🍴 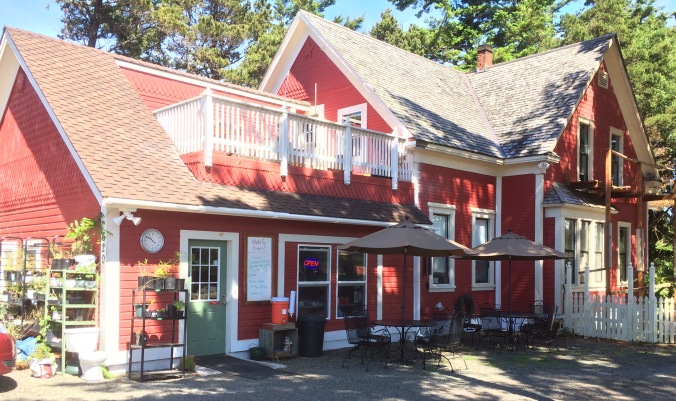 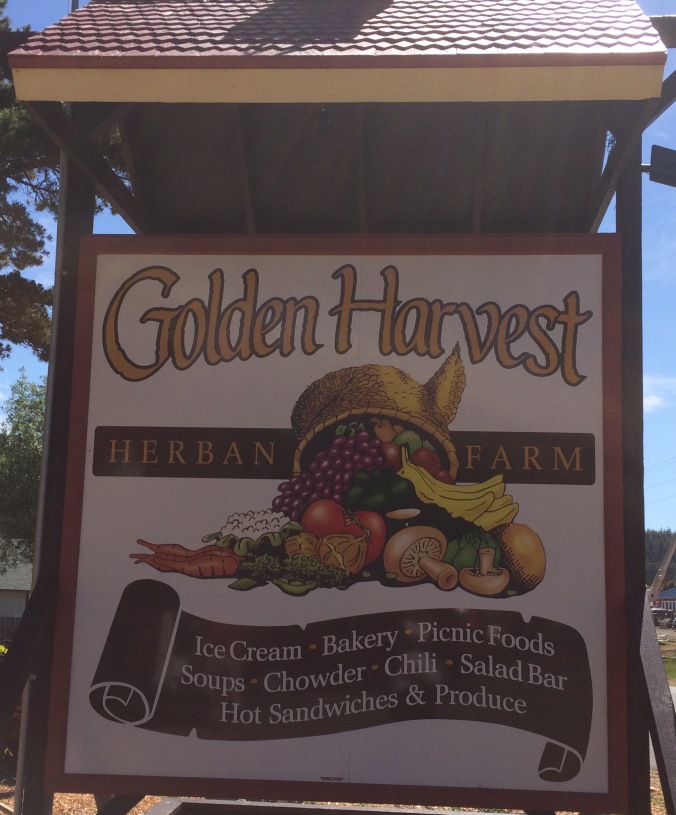 The sign says it all. They also have homemade frozen entrees such as mac and cheese, Lasagna, and meatloaf to take  and bake.

I went through the salad bar and loaded up on healthy greens, roasted chick peas, homemade hummus, tabouleh, and vegetables.

Jeff had a Reuben Pastie… a folded and crimped pie pastry filled with corned beef, sauerkraut, and Swiss cheese served with a side of Thousand Island dressing. 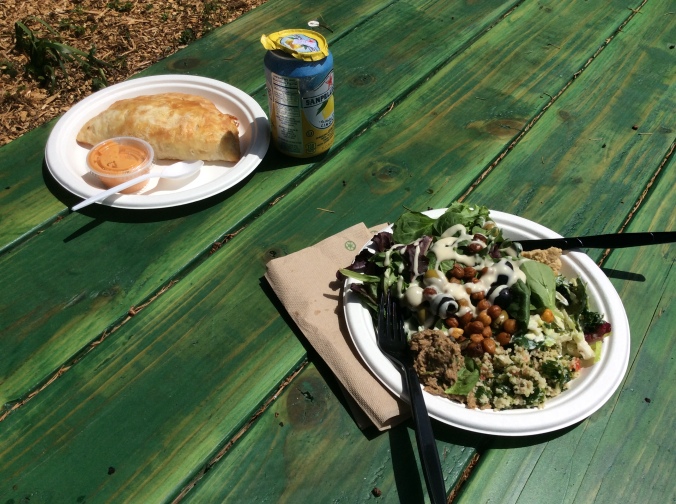 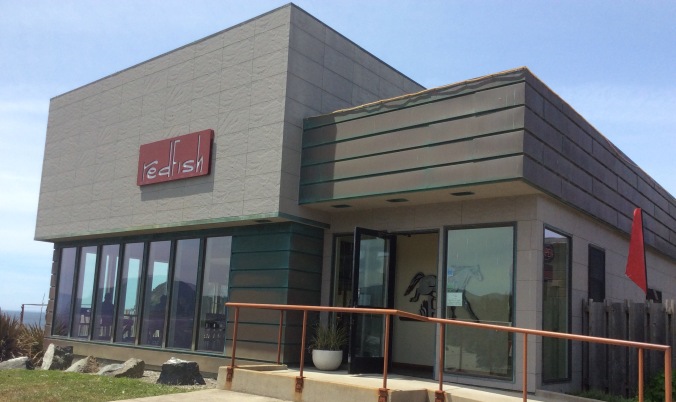 Redfish is in the same parking lot as the Visitors Center. It overlooks Battle Rock and the Pacific Ocean.

We attempted to eat here twice and both times we stood at the hostess station and waited to be seated or at least be greeted by someone. Even a nod or a “be right with you” would do. Both times we just stood there and looked at the upscale and expensive menu. The second time we tried to eat here for lunch, expecting an awesome fresh fish entree. But as we stood waiting and looking over the menu, the only fish choices were either an oyster or clam appetizer. Disappointed, we decided we didn’t want to eat here anyway. And since no one bothered to acknowledge us, we left… for good.   👎 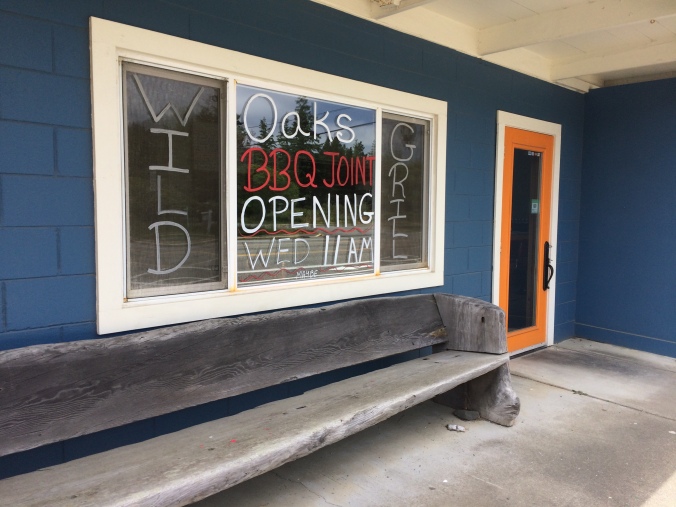 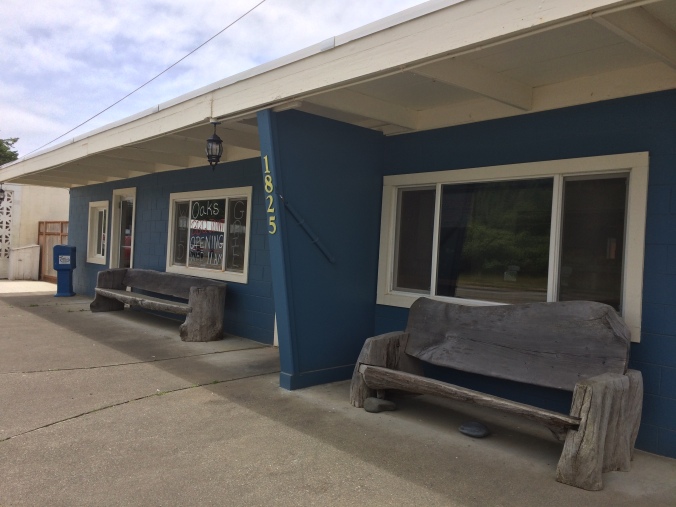 Wild Oaks, the new kid on the block, wasn’t even open when we first arrived in Port Orford in late May. The owners were taking over the Paradise Cafe and converting it into a BBQ place.

We met 2 of the owners at Umpqua Bank when Jeff opened up a checking account. By the way they were talking to the bank tellers, I surmised who they were and I asked how they were doing. So good, apparently, that they ran out of homemade barbecue sauce the day before and could not open today. But we found out that the special for the next day would be pork belly tacos. This sounded just too good to pass up!

So after our hike to Blacklock Point, I surprised Jeff with the suggestion that we pick up some lunch at the BBQ Joint.

True to the owners’ words, the pork belly tacos were the special of the day. Three cornmeal tortillas covered with smoky, tender chunks of thick, very thick bacon, and then topped with jalapeños, tomatoes, cilantro, cheese, and a drizzle of barbecue sauce. Seriously, 2 die 4!!! And only $7!

Since that day we tried the mac and cheese, chowder, chili, and pulled pork and ribs with fries and coleslaw.

The hearty mac and cheese was filled with smoked pork and medium-sized pasta shells… a little heavy on the cheese and smoked flavor, but if you want some serious comfort food and a food buzz that will leave you in a food coma… 🍴     🍴     🍴

But, the baby-back ribs could have used a little more time in the smoker, as the fat was not rendered… 🍴     🍴 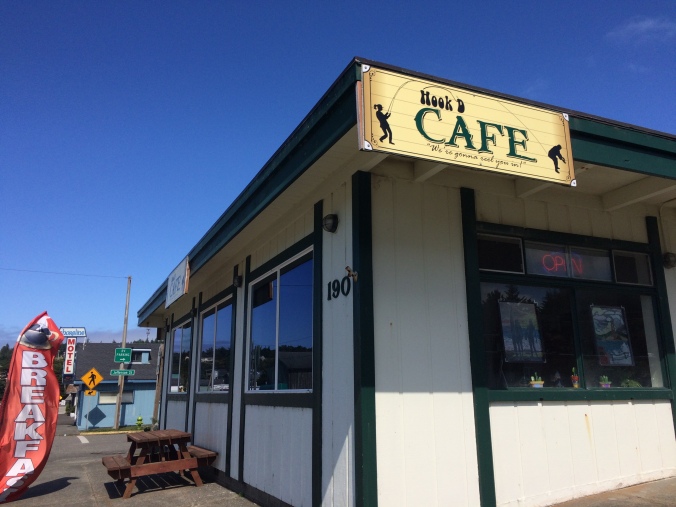 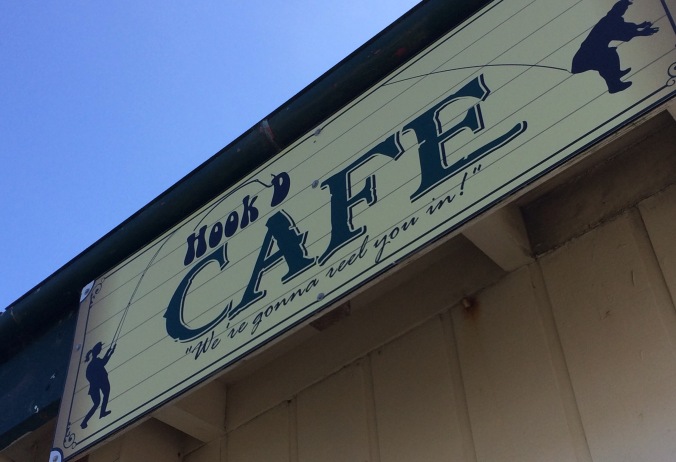 Open from 7-2, this local favorite is across the street from Battle Rock Beach on Highway 101. Breakfast is always served. Four front tables hug the windows with ocean views. 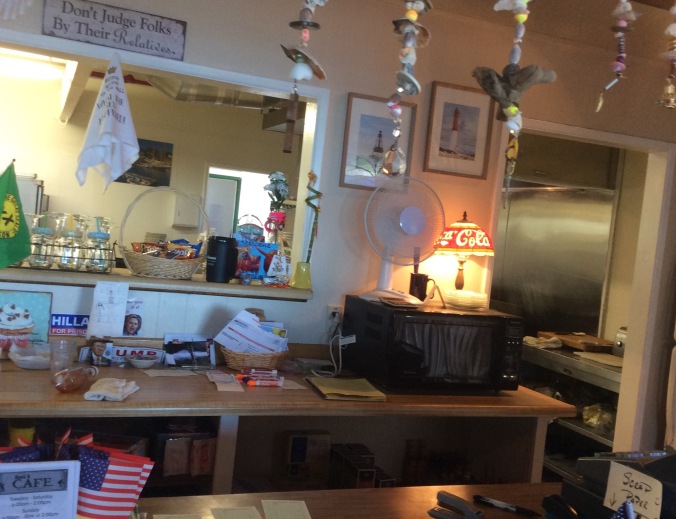 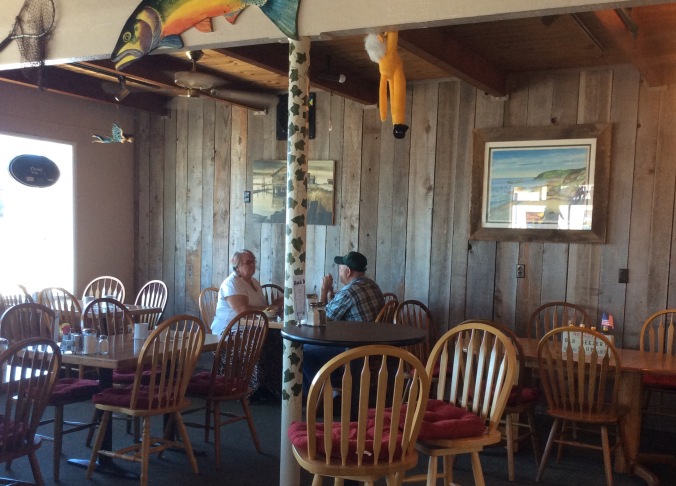 After leaving Redfish for the second time, we came here for lunch since we had never eaten here before. I think subconsciously we were hoping for a fish sandwich on the menu for Jeff. I could order an omelette or be tempted by a fish special.

Immediately we are greeted and seated by the friendliest and most positive woman on earth. So, even though the menu lacked local color, we stayed for lunch.

Jeff ordered the Full Monte… a grilled sourdough sandwich with beef, Swiss cheese, and diced chili peppers. It was served with spicy fries. 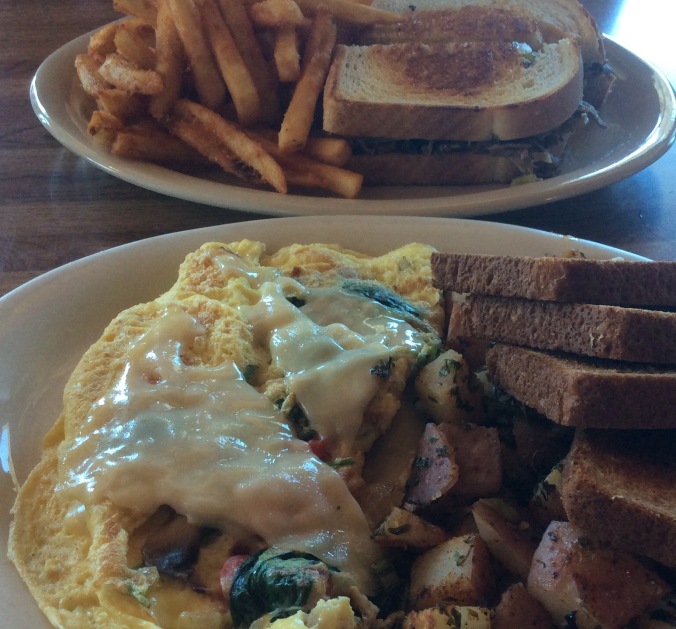 Unless you’re looking for a fish sandwich platter… 🍴     🍴

We have yet to try…

Pitch’s… a bar and grill 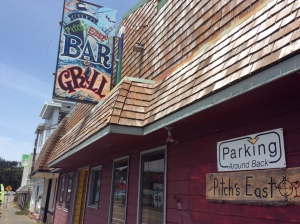 TJ’s Cafe… the other local diner

One Lump Or Two… a morning coffee spot until 11 AM 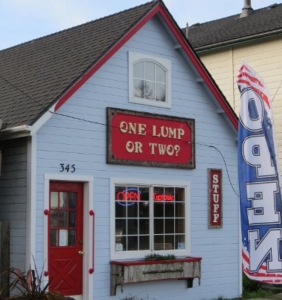 Eddie’s… used to be Siren’s Cafe… now, only coffee and cookies 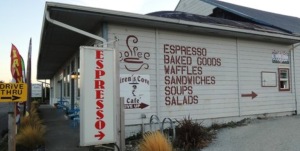 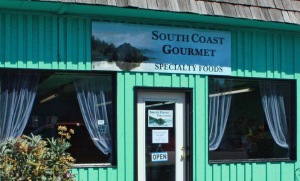