The defining geological feature of Capitol Reef is the wrinkle in the earth’s crust, called a Waterpocket Fold,  stretching almost 100 miles from Thousand Lake Mountain to Lake Powell.

This wrinkle, or fold, started over 280 million years ago as the climate and geography changed dramatically creating oceans, deserts, swamps, and river beds in the same area. These drastic changes left a deposit of 10,000 feet of sedimentary rock made up of limestone, sandstone, and shale.

Then, between 50 and 70 million years ago, an ancient fault within the eart’s crust reacted to a shift in tectonic activity. Layers of earth to the west of the fault were lifted

over 7,000 feet above the layers of earth to the east of the fault. Instead of cracking, however, the rising layers of rock folded over the fault line. More uplift occurred again some 20 million years ago.

Water and gravity sculpted the uplifted rock layers. Most of the carving occurred between one and six million years ago. Torrential rains, flash flooding, and freeze-thaw cycles caused rocks to loosen, crack, and wash away. These erosive forces created the canyons, cliffs, and domes that make this National Park spectacular. (park brochure)

Notice the 3 distinguishable layers of rock in the picture of The Castle. These layers represent the gradual change in the climate that occurred over a 40-45 million year period. Let’s start with the oldest layer.

The brick-red layer of the Moenkopi Formation is approximately 245 million years old. The ripple marks and mud cracks indicate an arid, subtropical land of river deltas, tidal mudflats, and a shallow sea. (plaque across from site)

Then, approximately 225 million years ago, the gray-green and purplish layers of the Chinle Formation were deposited as Volcanic ash drifted down upon a low, swampy floodplain. Lowland conifer trees fell into the swamp’s mud to become petrified wood. (plaque across from site)

Finally, the highest layer of rock, the Wingate Sandstone, is approximately 200 million years old. These orange-red rocks are solidified sand dunes. A desert as large as the Sahara once drifted here. Wind blown sands were buried by newer sediments and cemented into stone. The erosion of the stone created the spires of The Castle and the high cliffs of the Fruita area. (plaque across from site)

The Fruita Historic District is near the Visitor Center and is the only developed campground within the NP.

Around 1880 a small group of Mormons established a settlement here on the banks of the Fremont River, flowing down the cliffs and domes of the Waterpocket Fold. Since this little community was located at the junction of the Fremont and Sulphur Rivers, it was named Junction.

The orchards of the residents prospered and by 1902 Junction became Fruita. Even though life was good around the Fremont River, no more than 10 families ever lived here at a time.

With the establishment of the Capitol Reef Monument in 1937, more sightseers meant the roads leading to the natural wonder had to be paved. And eventually the NPS purchased all the orchards. (nps.gov) 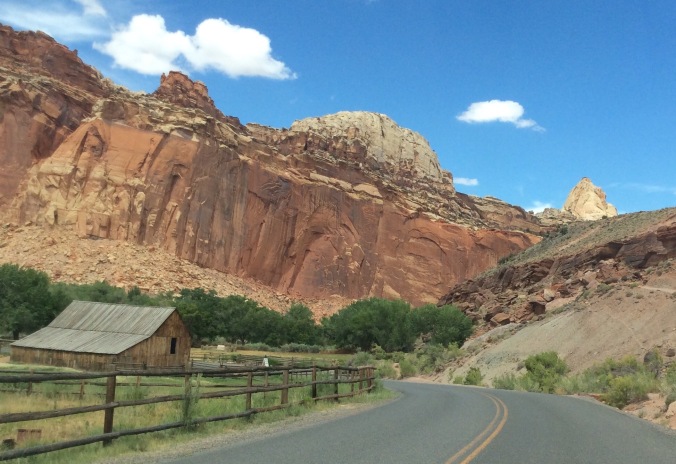 Orchards have apple, cherry, peach, pear, plum, apricot, and almond trees. When the fruit are in season, you can pick and eat fruit free of charge. A nominal fee, however, is charged to take fruit with you. (park brochure)

We continue on route 24 for about 9 miles before heading back to take the Scenic Drive.

The Fremont River babbles with water is the color of terra cotta. 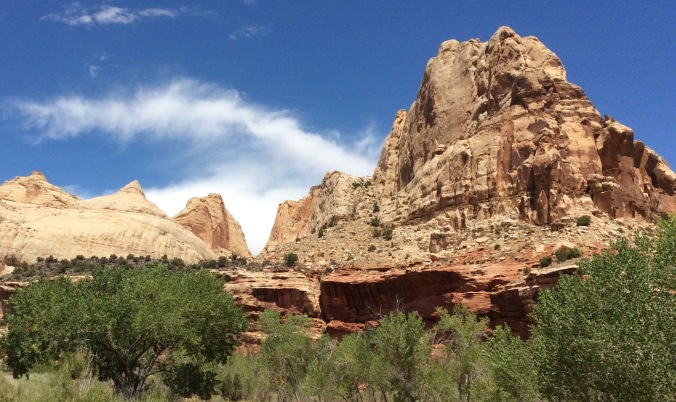 Walking along the panel of rock… 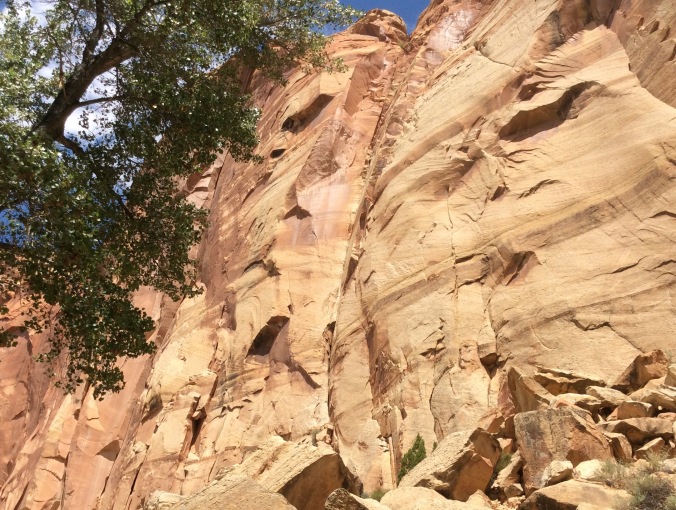 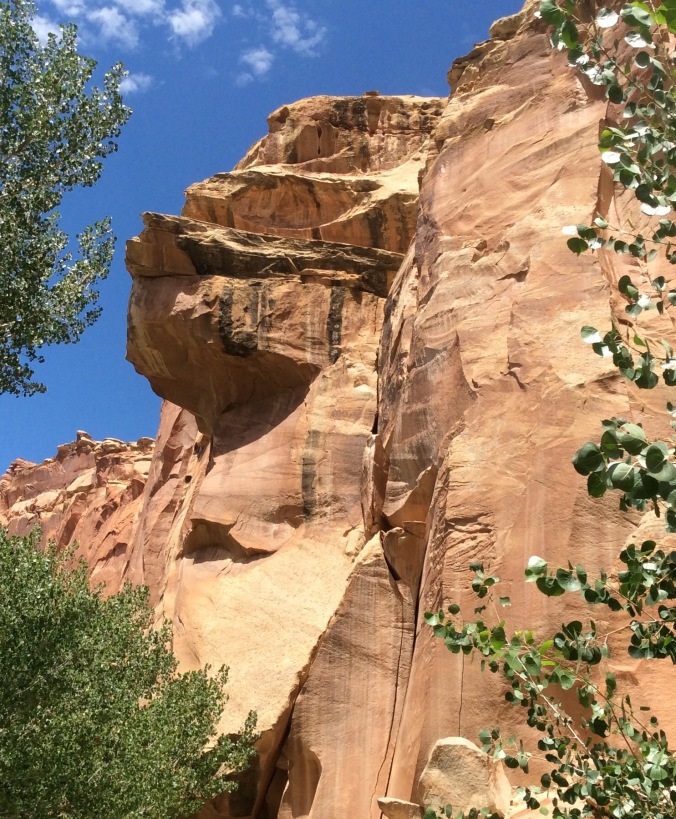 Back to Fruita and the beginning of Scenic Drive…

One thought on “Cruising the Reef”