A Wilderness of Rock

Water and gravity are the master architects of this NP on the Colorado Plateau. These powerful natural forces cut flat layers of sedimentary rock into hundreds of amazing canyons, mesas, buttes, fins, arches, and spires that are too beautiful to describe in words.

Before being dedicated as a NP, in 1964, these remote lands were only familiar to Native Americans, cowboys, river explorers, and uranium prospectors.  (park brochure)

Canyonlands is made up of 3 different regions: Island in the Sky to the north, The Needles to the south, and The Maze to the west. The Colorado and Green Rivers intersect these distinct regions.

Both Island in the Sky and The Needles are accessible off 191 that runs through Moab. The Maze is the least accessible district of Canyonlands requiring a 4-wheel-drive vehicle, more time, and some self-sufficiency to visit this more remote area.

We head north for about 10 miles and then head west on 313 for another 20-some miles to reach the Island in the Sky Visitor Center.

But before we get to the Visitor Center, 2 spectacular rock formations catch our attention. 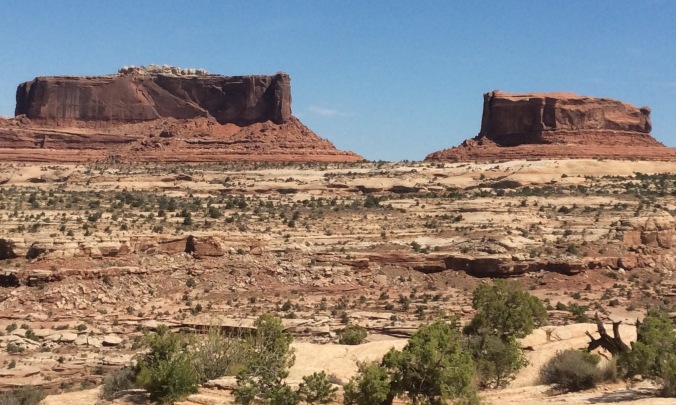 Do these rocks remind you of anything? (Hint: Civil War ships)

We stop at the overlook and read the posted information…

These prominent 600 feet-tall landforms are the Monitor and Merrimac Buttes.

Short history lesson: The Merrimac, on the left, was the Confederate ship, called the “Virginia” by the southern troops. The Monitor, on the right, was the Union ship, sent to destroy the Merrimac.

We also learn that this view area, and much of the Colorado Plateau, rests on Navajo sandstone deposited some 200 million years ago when a vast desert existed here. These sand dunes eventually hardened and petrified into the many rock formations that are visible throughout Canyonlands.

Our first stop is Grand View Point Overlook at the edge of the Island in the Sky mesa. This broad mesa is wedged between the Green and Colorado Rivers.

Closest to the mesa’s edge is the White Rim, a nearly continuous sandstone bench 1,200 feet below. 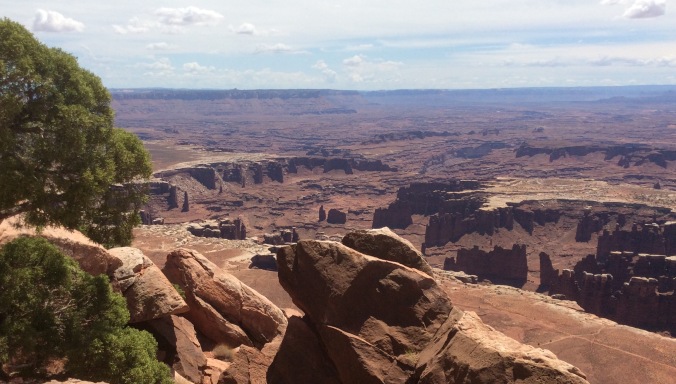 A plaque at the Overlook explains how mere drops of water chisel solid stone into dramatic cliffs, spires, mesas, and buttes. Rainwater seeps into the thirsty sandstone, we are standing upon, and collects in razor-thin cracks.

In winter the water freezes and widens the cracks, splintering the rock into great slabs that tumble into the canyons. Thunderstorms release torrents of rain that send waterfalls of loose pebbles and dirt over the edges of the cliff. Softer slopes of clay and mudstone crumble beneath the force of the water. A stair-step shape emerges as water carves alternating layers of harder and softer rock. Most of the water evaporates or is absorbed into the rock layers. Only some of the water reaches the Green and Colorado Rivers, unseen in the canyons below, carting away thousands of feet of rock, one grain at a time.

The colors of the Colorado plateau are due to the different minerals inside the rock layers and how they react to weathering. Each sedimentary rock layer offers its own predominant color phase.

When the iron in the rock is exposed to the atmosphere, it gives off a vibrant red and yellow hue. The black sheen, called “desert varnish”, is produced from manganese. The purples and greens are caused by the clay minerals from the Morrison and Chinle Formations. (posted info at Monitor and Merrimac Overlook) 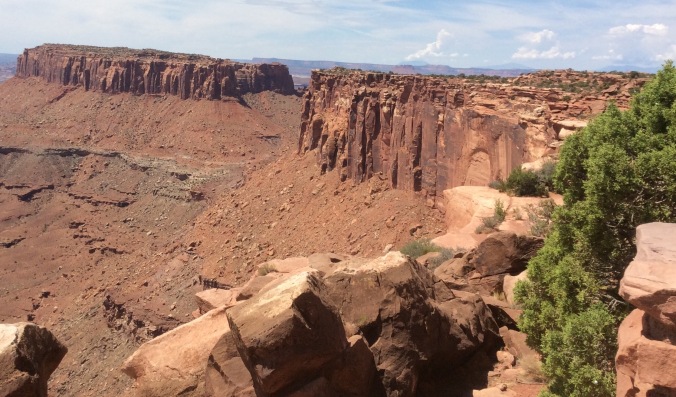 Grand View Point Overlook marks the southern-most end of the paved road through Island in the Sky. We retrace our route and stop to see what we missed…

Buck Canyon overlooks the Colorado River to the east.

More pictures from the edge…