There are over 2,000 cataloged arches in this National Park, ranging in size from a 3-foot opening (the minimum considered an arch) to the longest, Landscape Arch, measuring 306 feet base to base. (park brochure)

Can you find the 2 arches in the picture below?

Look again for 2 small pinpricks of white in the upper middle section of rocks. (I deleted the photos before I could point them out.) 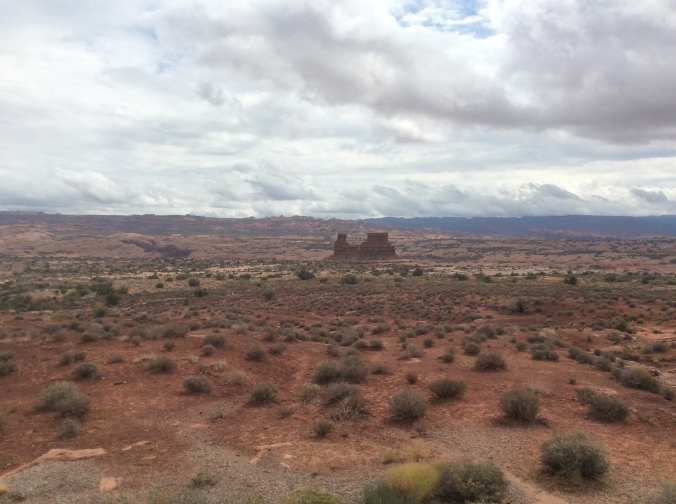 Can you spot The Three Gossips whispering below?

Below is Sheep Rock, but it looks like a lamb to me. 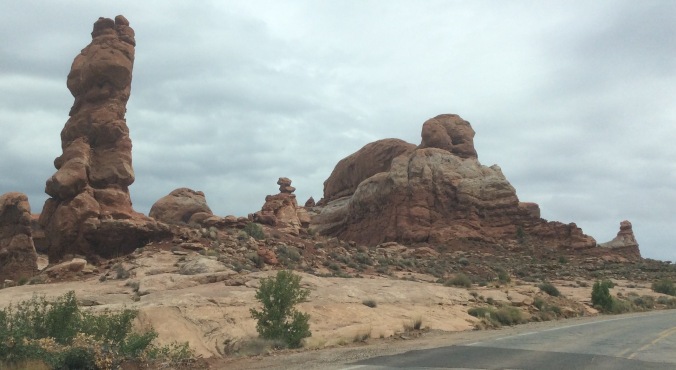 Jeff and I first visited Arches National Park in December of 2009. It snowed heavily as we traveled into Moab. The next day, the NP actually closed because of the weather conditions.

Fortunately the Park reopened the next day and we were able to drive the main road out and back, traverse the side roads, take a few short hikes, and bask in the awe of these natural wonders surrounded by blue sky and white snow.

Today we return and wait a good half hour in a line of cars before gaining entrance to the main road that traverses the Park.

Unfortunately, major road construction has intermittently closed some sections and littered the landscape with orange cones.

I have done my best to crop out the orange construction cones so I can share the beautiful scenery from the main road, a 36 mile out and back drive, on a partly cloudy, sometimes sunny day with threatening storms on the horizon. Honestly, the  sky adds a hint of surrealism to these incredible rock formations. 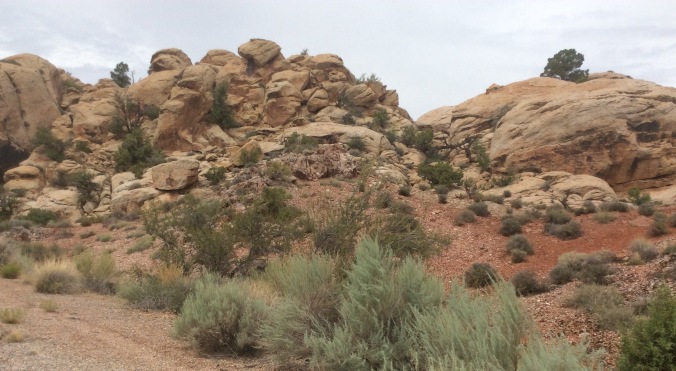 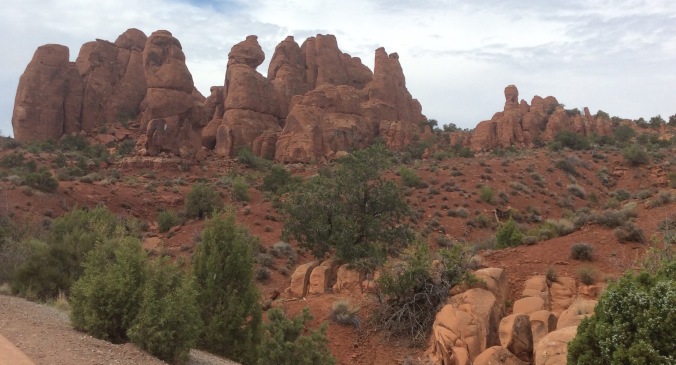 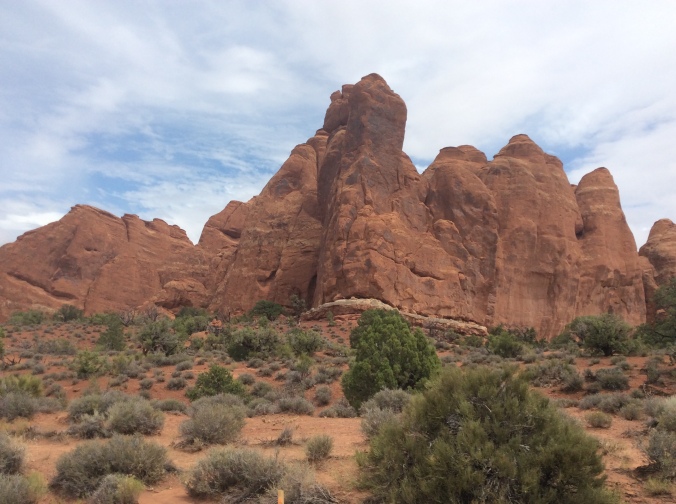 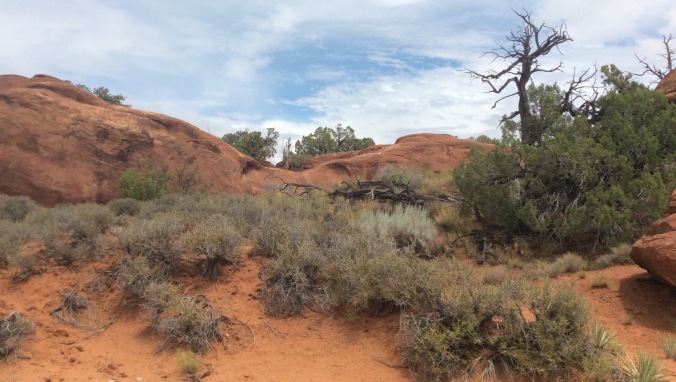 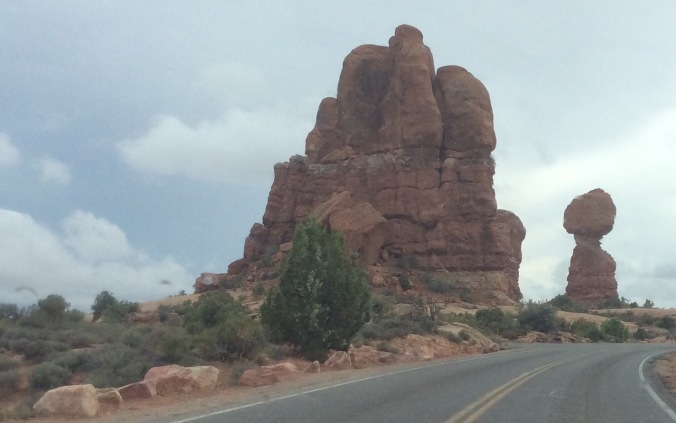 Do you remember the name of this formation? (Hint: whispering women…) 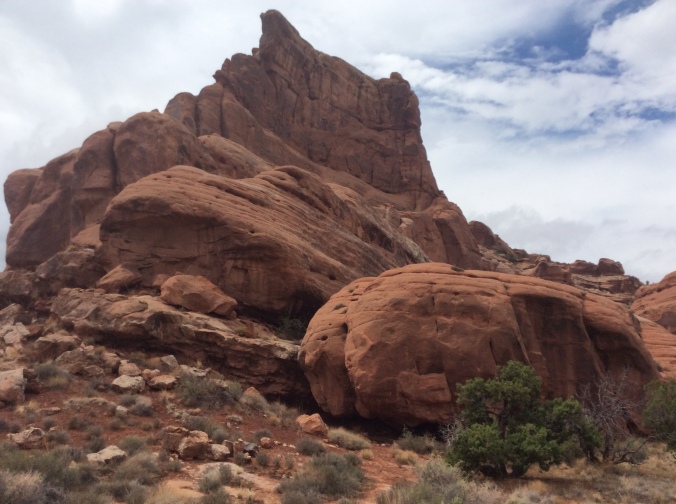 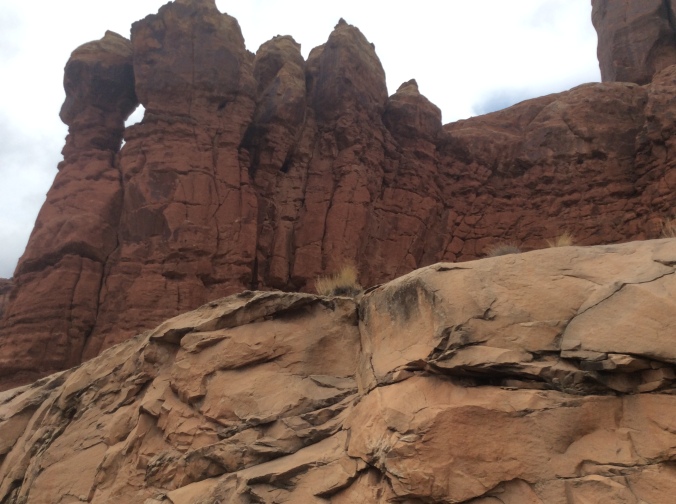 How did the arches form?

Three hundred million years ago a sea flowed across the Colorado Plateau and left a thick salt bed deposit as it eventually evaporated. Arches National Park lies atop this underground salt bed, thousands of feet thick in some places.

Then, over millions of years, residue from floods, winds, deserts, and more oceans, that came and went, blanketed the salt beds and compressed into rock.

The weight of this thick cover of rock caused the underlying salt bed to shift, buckle, and liquefy. This repositioning of the salt bed thrust some layers of rock upward creating domes while other layers of rock fell off section by section.

Over time rainwater seeped into the porous cracks, joints, and folds of sandstone. As the water froze, the rock expanded and contracted and broke off in bits and pieces. Wind later cleaned out any loose particles, leaving behind a series of freestanding fins. More wind and water caused some fins to collapse.

But others, harder and better balanced, survived this erosive process despite missing sections of rock underneath. These became the iconic arches of Arches National Park. (park brochure)