From Alliance, NE we travel across the north-central part of the state through the Sandhills, a region of mixed-grass prairie on grass-stabilized sand dunes. (en.m.wikipedia.org)

This means the large sand masses were formed by blowing sand and are now held in place by vegetation consisting mainly of grasses. (extension.unl.edu)

The Sandhills sit on the Ogallala Aquifer which creates temporary and permanent shallow lakes and wetlands.

The Ogallala Aquifer is also referred to as the High Plains Aquifer because it sits under some 174,000 square miles of the High Plains, stretching from South Dakota to Texas.

It is a porous body of complex sediments and sedimentary rocks that holds groundwater, producing wells and springs. (plainshumanities.enl.edu)

Sixteen miles east of Thedford, NE and a mile west of Halsey on State Route 2, we spend 3 relaxing nights here. For $5.50 per night, we have a space with electricity. 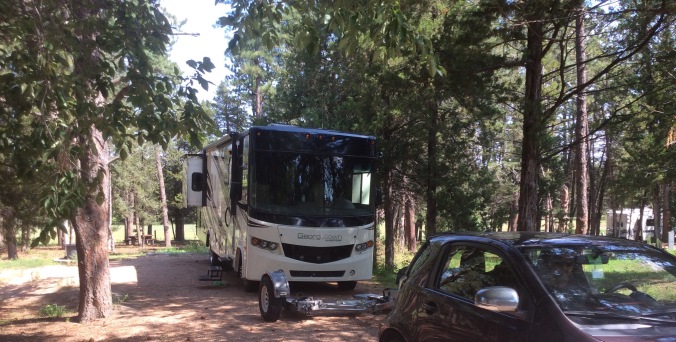 Dr. Charles E. Bessey, a professor of botany and horticulture, was convinced from his surveys that this region of Nebraska was once forested and could be forested again.

So, in the late 1880s he proposed planting a Sandhills forest.

Recognizing that much of the of the country’s eastern forests had been harvested or burned, he wrote to President Theodore Roosevelt on January 25, 1902 stating, “… it is merely a question of a few years before the General Government must take steps to provide for the production of timber for our future needs… ”

On April 16, 1902 two Forest Reserves were established by Presidential Proclamation. In 1908 the 90,000 acre Dismal River Forest Reserve became the Nebraska National Forest and now contains over 22,000 acres of hand-planted trees.

Ironically, the National Forest provides many values, but supplying timber is not one of these. Instead, this public land supports wildlife habitats, livestock grazing, and recreation. (plaque in Nebraska National Forest)

The campground sits near the Bessey Nursery, the oldest seedling nursery managed by the USDA Forest Service. A walking trail meanders sporadically through the Bessey Arboretum. There are 52 tree species on this self-guided walking tour, the first trees most probably planted in the early 1900s. Jeff and I identified them all! 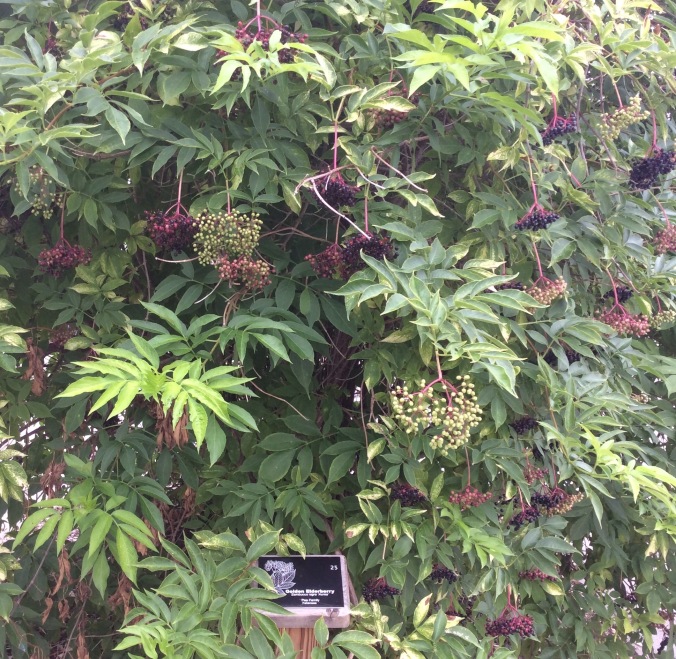 And the Catalpa, with its green bean-like pods…

As we meander through the arboretum and picnic grounds we cross the Middle Loup River.

The Loup is the most extensive prairie river system in the Sandhills.  A prairie river, also referred to as a braided river, is a wide shallow river with a network of narrow channels meandering through a broad riverbed.

Prairie rivers carry a lot of sediment that forms sand bars, or braids, which separate the channels. Sandhill rivers have few tributaries and flow at a steady rate. (plaque on bridge)

Watch your step here! The stairs lead directly into the river… a great place to start tubing or kayaking. 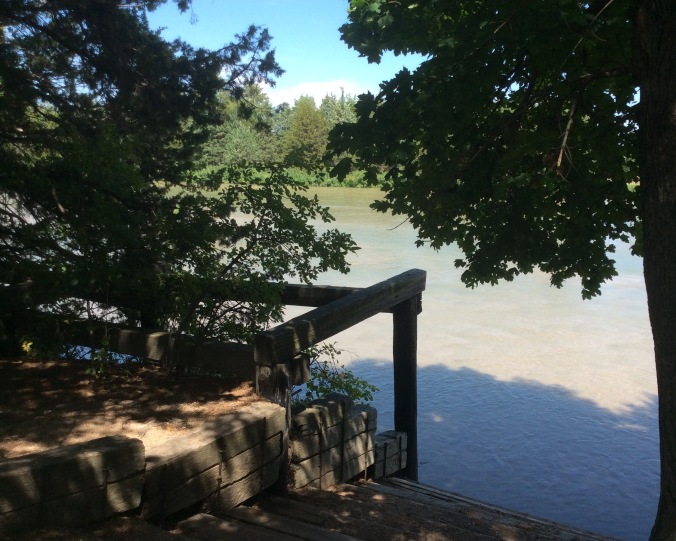 A fishing pond lies next to the river.

Built in 1944, this is the only functioning fire lookout tower in the state of Nebraska. It is still used to scan for fires when the danger of forest fires is high.

From the observation tower the views of the Sandhills, grasslands, and forests are pretty cool.

What’s not so cool…

me… afraid of heights…

Halsey is 1 mile east of the Nebraska National Forest.

It has a post office, motel,  and restaurant. And that’s pretty much it… A plaque on the Community Building explains the history of this village:

In 1885 surveyors designated a route through the Sandhills for a Burlington Railroad branch line. The rails reached this point in 1887 and the town was laid out. It was named Halsey after Halsey E. Yates, the son of Charles E. Yates, a Burlington railroad official.

The tracks and trains still run through here…

…on the edge of the Nebraska National Forest… parallel to State Route 2… and oh, so close to the Bessey Recreation Area campground…

Hearing trains blasting their horns in the distance is nostalgic and soothing. Having your sleep interrupted all night with the oncoming roar of locomotion followed by sets of blasts from train horns… not nostalgic or soothing… but something to laugh at, deal with, and count each night!