After several attempts driving to Cape Blanco to access the northern beach and walk from the Lighthouse to Blacklock Point, we finally succeed. Today is not foggy, windy, or cold.  And the tide is low.

We park outside of the gate leading to the Lighthouse and descend onto the beach. 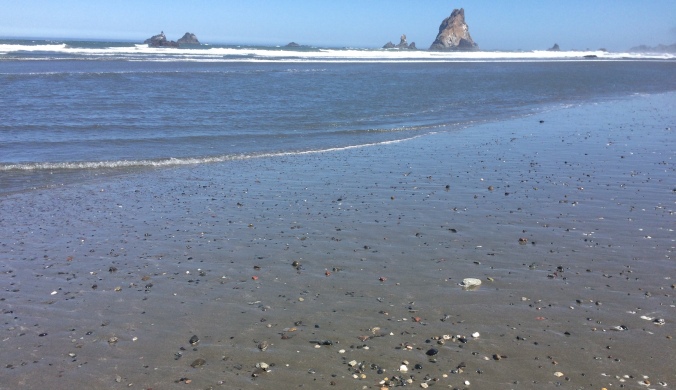 Waves crash over boulders on the shore, painting them shiny black. 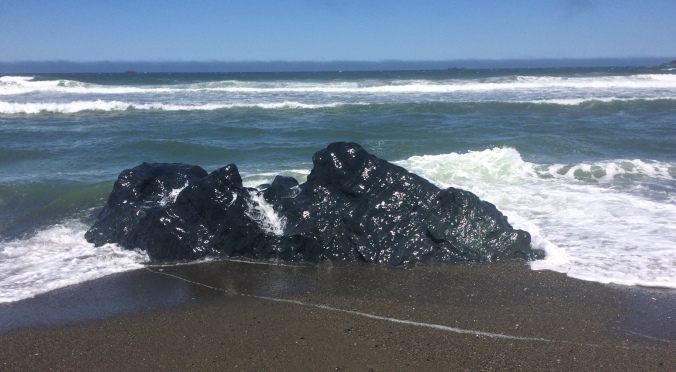 About an hour later we approach the southern side of Blacklock Point and make our way through the green, red, orange, and gray rocks. 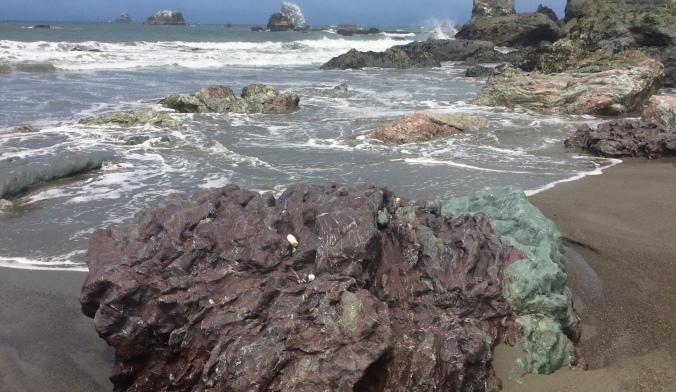 High tides from winter leave piles of driftwood atop ridges of sand. 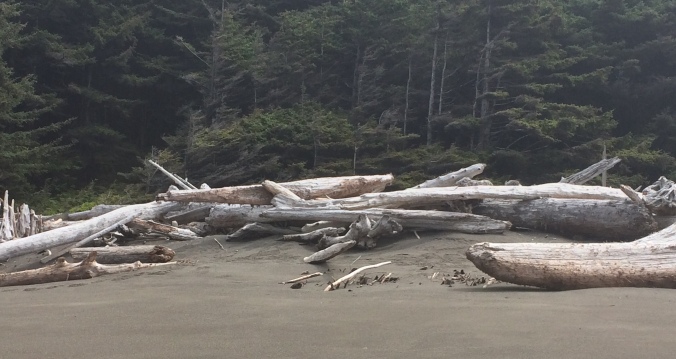 A whimsical driftwood hut has lost its roof. 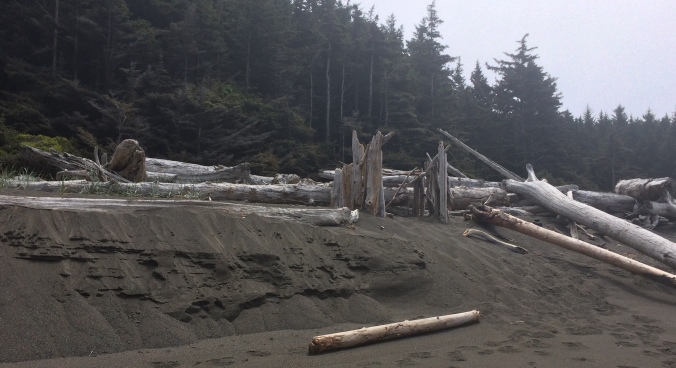 Strong winds and waves wedge this large piece of wood into these boulders on the beach. Oh, did I forget to mention that this photo is facing east? 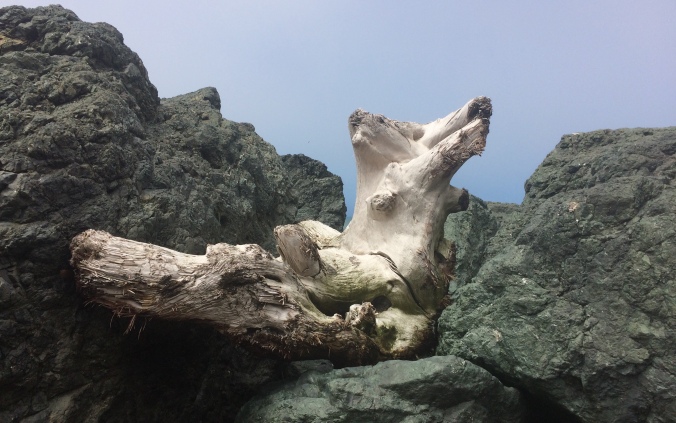 There’s the ocean peaking through. And look, the fog is rolling in. 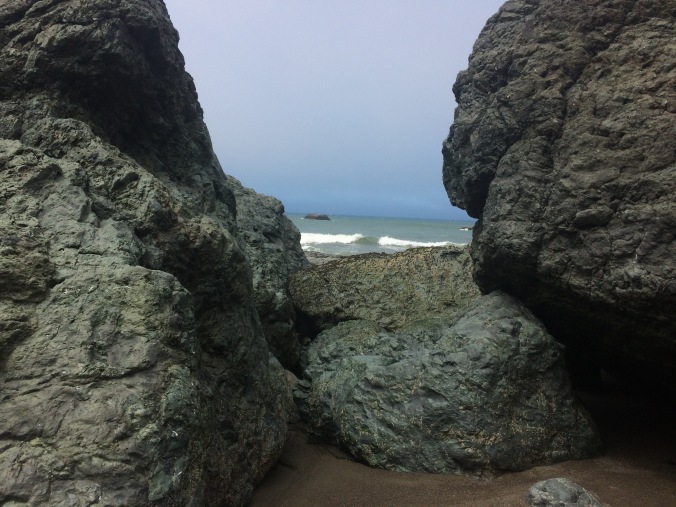 We climb a grassy dune scattered with driftwood…

…and descend onto another rocky beach. 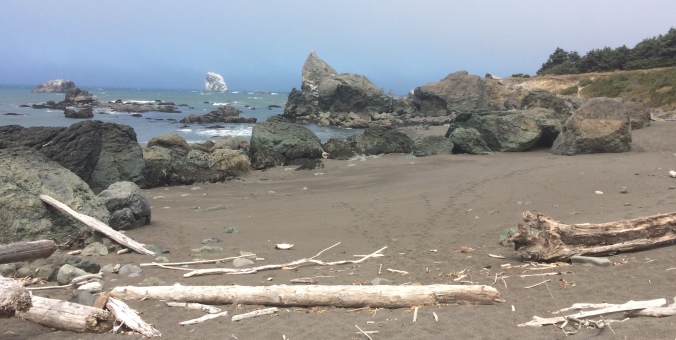 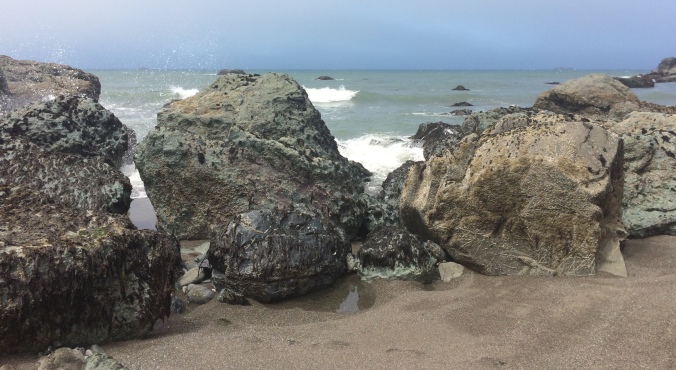 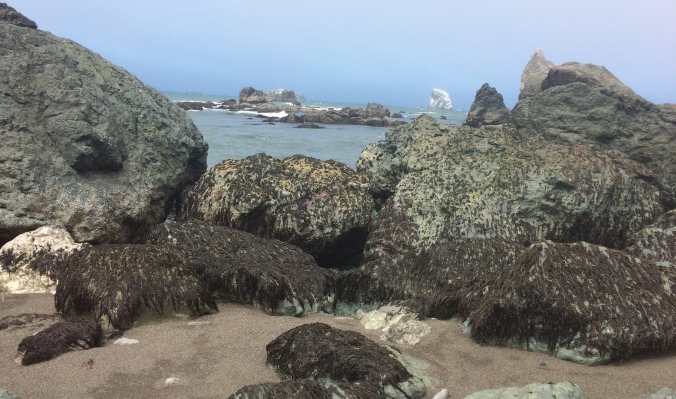 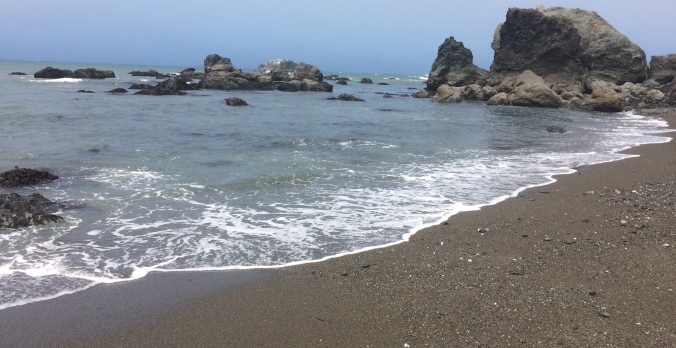 A path leads up to higher ground. 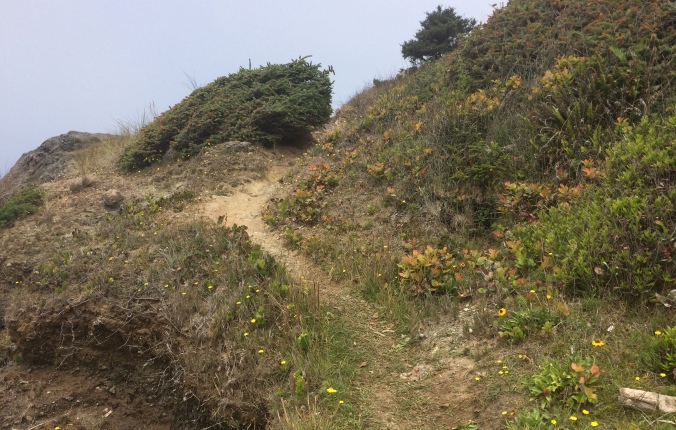 The deep crack in a rock resembles an upside down letter V. 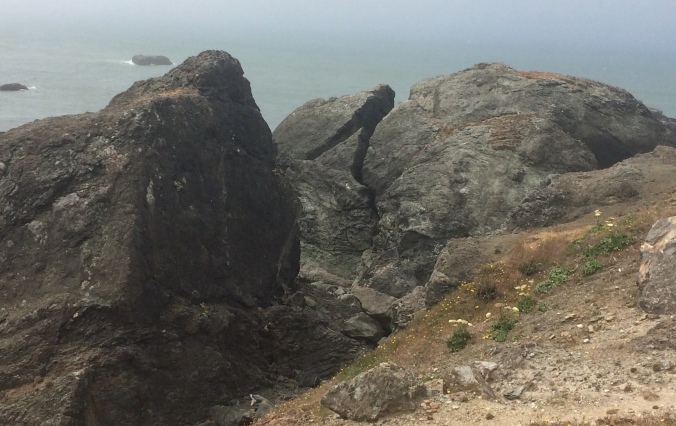 The fog thickens and obscures Blacklock’s ledge of rugged rocks jutting out to sea. 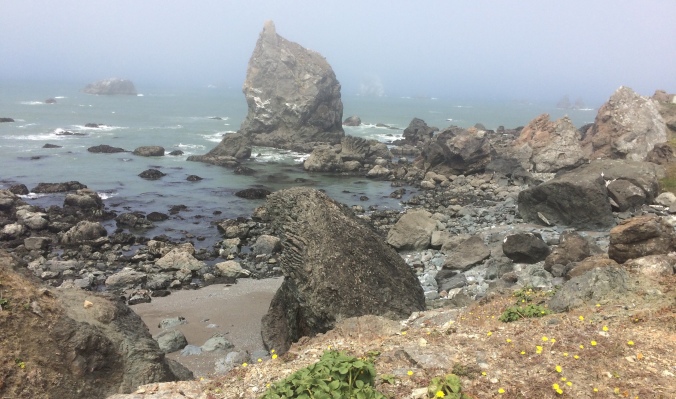 Coming down the path we encounter a grandfather, his 3 grandchildren, and 2 dogs. The kids romp on the beach. 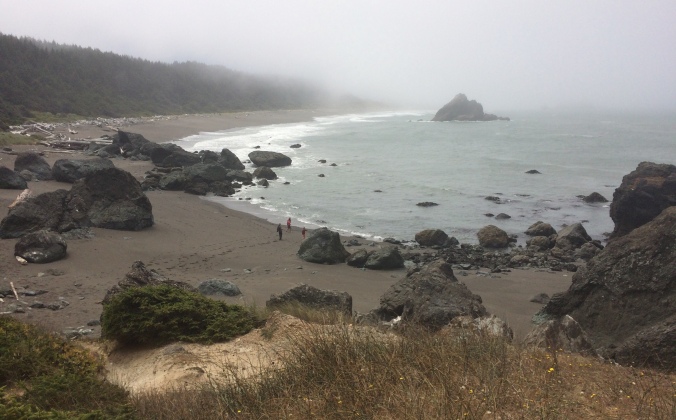 And we head back. 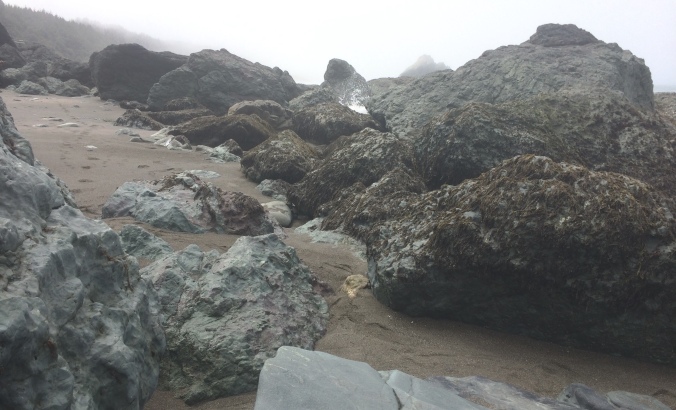 The sea gets choppier. 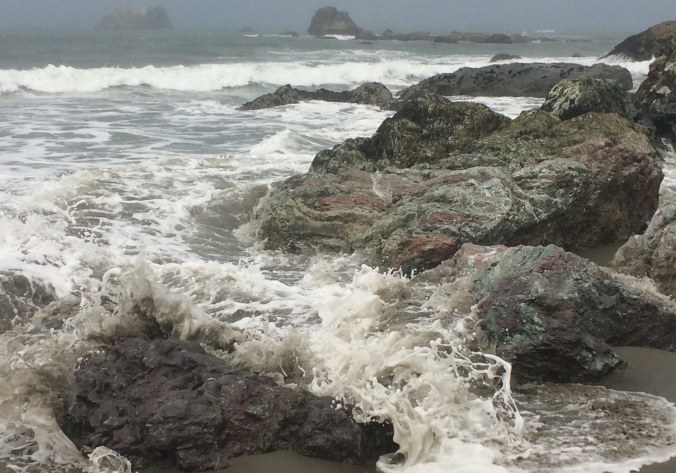 The sky blends into the ocean.

The Sixes River pools into a lake. 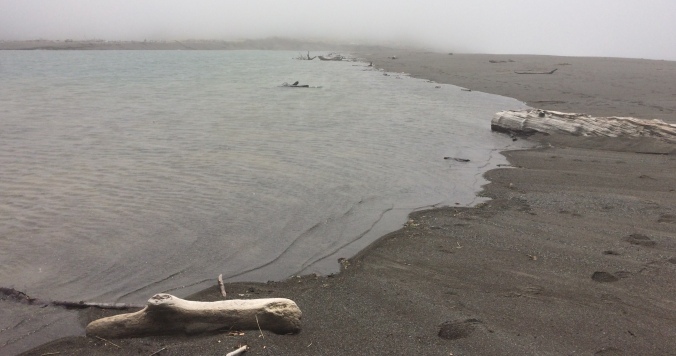 The mouth of the river no longer reaches the Pacific. 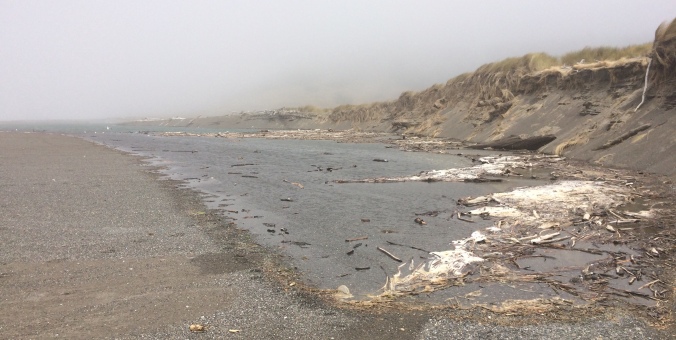 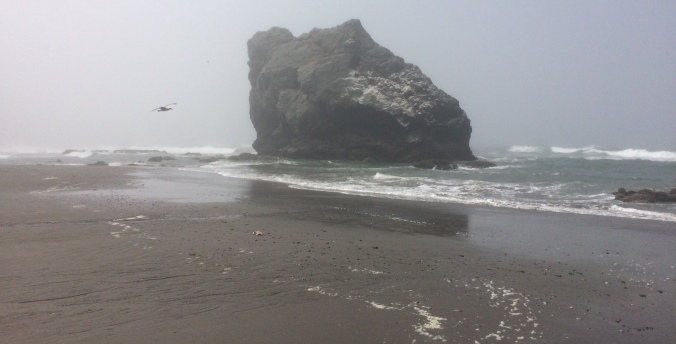 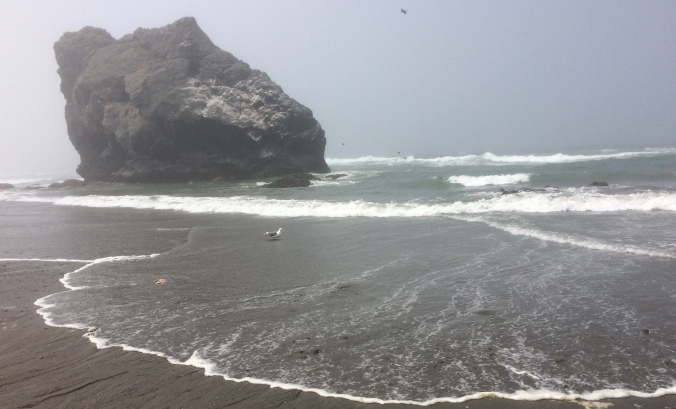 A clump of kelp… 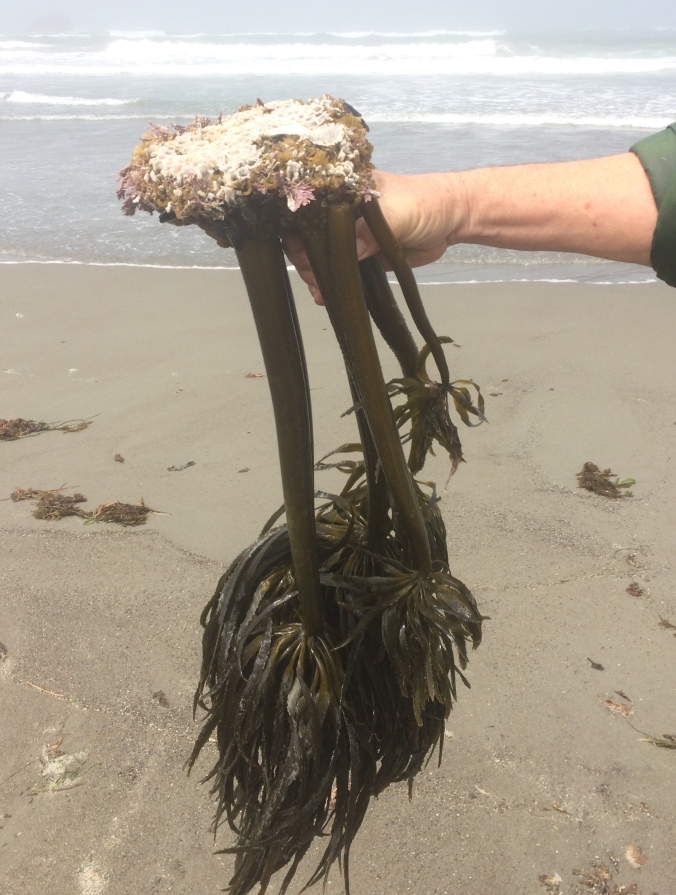 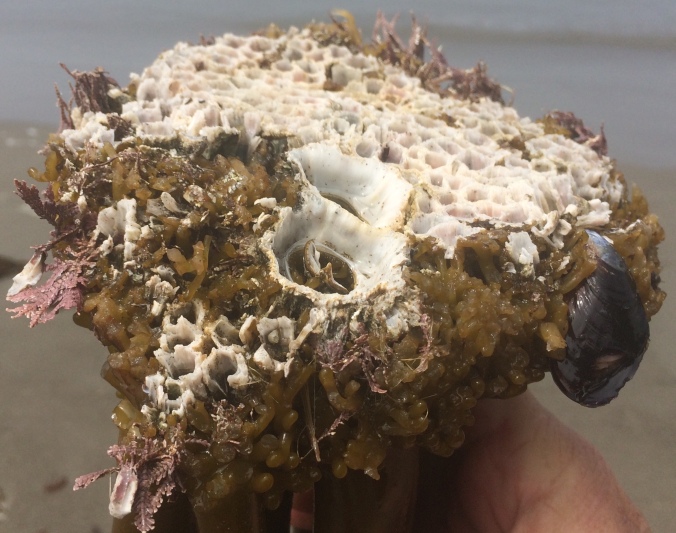 Two and a half hours later we are back where we began, on the beach beneath the lighthouse. Trust me, Cape Blanco Lighthouse is there, buried in the fog.