From summers past, I knew the library “hired” volunteers.  After arriving here April 16th, I decided to seriously check out (get it?) this opportunity.

So, in May I talked to the Director of the library, Denise Willms, to inquire about the possibility of my volunteering. When I mentioned that I was a retired librarian, she smiled and said, “Laurel, librarians never retire!” We became instant friends, scheduled a meeting  on Monday and on Friday, May 18th, I reported for duty from 10-12.

I work with a most wonderful woman named Daisy, originally from Brazil. She came to Port Orford by way of Portland several years ago. She also volunteers at the CO-OP, a natural foods market and deli in town. Daisy is quite the gardener. She owns 3 plots at Buffington Memorial Park where she grows all sorts of vegetables for her plant-based diet.

A library begins with the first book

In 1921 the State Library in Salem loaned one hundred books to Port Orford creating a traveling library that was operated out of the Port Orford Hardware Store. Mabel Gillings, the wife of the hardware store owner, was responsible for transporting the books back and forth.

In 1927 the Women’s Club of Port Orford established an official library with 315 books. It was open two afternoons and one evening a week in the rooms of the Civic Improvement Club. Between 1929-1932 the Women’s Club rooms and library were located in the same building as the Leneve Drugstore.

In 1934 the library shared a  building with the Chamber of Commerce and Civic Club Rooms. Rent was $1 per month. The library owned 1,552 books and was open for 8 hours a week. The population of Port Orford was 449.

When this building was sold in June 1935, the library collection was moved to the high school until a new Civic Club Community House could be built. The Port Orford Women’s Club helped circulate books for one hour after school on Tuesdays and Thursdays and for two hours on Saturday afternoons.

In 1937 the Women’s Club built their own building, the afore mentioned Community House.  Various community groups held meetings here, including the American Legion Post before their building was built.  A Curry County Reporter article from June 1938 stated that Mrs. Maude Lynch, the president of the Women’s Club, was working on library books “at the Community House and will later fix up the Women’s Club library”, perhaps implying two library collections? In September of 1938 the Reporter referred to Maude Lynch as the library supervisor. In December the same newspaper printed an article about the opening of the Women’s Club library and the resignation of its president, Maude Lynch. Then in January 1939 the Curry County Reporter stated: “The town library will open Saturday from 2 to 4 pm at the Legion Hall under the supervision of Maude Lynch.” Indeed, it seemed two rival libraries existed in a town of 755 people by 1940.

In late 1940 the Oregon State Librarian, Harriet Long, visited Port Orford to consolidate the two libraries. After sorting, discarding, and mending books, the Curry County Bank donated a small building to house the collection. This building was then moved to the site occupied by the City Hall. A librarian was hired with funds from the Works Progress Administration, patrons received library cards, and the collection grew. When W.P.A. funds were no longer available, volunteers operated the library.

By 1956 the city had enough funds to hire a librarian again. Unfortunately a fire in 1958 destroyed all the buildings at the City Hall site, except for the jail. Library books were saved but water-damaged and moved into the vacant Post Office Building on Highway 101, sharing a crowded space with City Hall offices.

In 1962, with donated land, a new City Hall, designed to include space for the library, was built and dedicated on April 21st.

By the late 1960s, however, the library needed more space and the Library Board considered constructing a new building with funds received from the city and county. In 1970 the Board asked Curry County for $18,000 to build a new library. In 1972 Gold Beach, 25 miles south of Port Orford, donated almost 1/3 of its annual county library funds ($8,000) toward a new library. Local volunteers installed the ceiling and furnace ducts, built tables and myrtlewood panels for the end of the bookshelves, and painted. In 1973 the new library building opened, sharing space with the Port Orford City Council. By 1975 the library had a collection of 10,000 volumes and 15 children participated in the Summer Reading Program.

By the early 1980s the county funds allocated to the library were reduced to nothing. The Library Board took the necessary steps to form a tax district requiring a voter-passed levy to finance the library. On November 2, 1982 voters approved the Port Orford Public Library District, one of the first in the state. In 1983 a levy passed to fund the library. The November election of 1984 successfully established the tax base on which the library continues operating today.

In 1988 eight out of ten people living in Port Orford had active library cards.

The possibility of building a new library for Port Orford went from a dream to a hopeful reality in 1994, when funds from Charlotte Johnson’s Memorial were used to start a Capital Reserve Fund for library expansion. A year later the Port Orford Public Library Foundation was formed to manage funds and secure more. In December 1999 a bequest of $80,250 from the Robert Reinhardt estate turned hope into a promising reality.

After 22 years as librarian, the longest of any in Port Orford, Bonnie Wagner retired in 1999. Tobe Porter, librarian at Langlois, 12 miles north, was hired on a part-time basis and managed both libraries. She became passionately committed to building a new Port Orford library. In 2003 Tobe became the full-time director of the Port Orford Library, declining a position to serve on the Oregon Library Association, in order to apply for grants to construct a new building to house the library collection.

In 2001 Norma and Bob Carlisle donated property at the corner of 15th and Highway 101 for the site of a new library.

Bake sales, rummage sales, a quilt raffle, fundraising meals, musical events, book signings, art shows, donations, and grants helped advance the cause of a new library building. In May 2007 voters of the Library District  passed a $450,000 bond to ensure funds to pay for construction. On July 29, 2007 ninety-year-old Dot Mathews, representing the past, and four-year-old Rowan Tilley, representing the future cut the yellow ribbon. This was the signal for several of the younger patrons, with child-sized shovels and toy earthmoving equipment to ceremonially “break ground” for the new library. As more grants came in, the Library Board voted that it would be unnecessary to issue the $450,000 general obligation bond. In June 2008 the 11,000 square feet new Port Orford Public Library was finished, debt-free, and had a permanent home at last!

Port Orford Library is the hub of this town of 1100 people. Denise, the Director, is the only full-time staff member. Everyone else is either a volunteer or part-time employee. 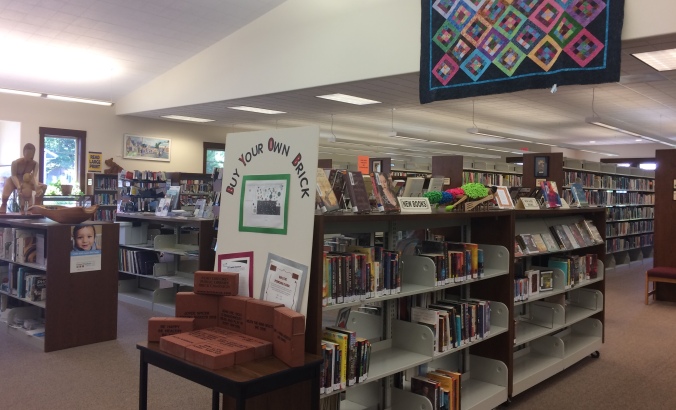 Port Orford is part of the Coastline Library System, 13 libraries serving Curry and Coos Counties. Requesting an item from any of these libraries is easy peasy.

The man in the black baseball cap, in the picture below, is Popz. Every Friday we wait together for the doors to open at 10 am. Some years back Popz, whose real name is Brad, owned a surf shop in Port Orford.

Last Friday, however, he wasn’t there. Today I found out that he passed away. Popz, though we barely knew one another, know you will be missed!

There are 3 meeting rooms available, 2 small and 1 large. Their calendar of events include metaphysical classes, youth chess club, folk dance, and bridge games, just to mention a few.

The Children’s Room is inviting and busy. Cheryl is in charge of the Children’s and Young Adult collection. She plans programs throughout the year and oversees the school libraries’ collections as well. Driftwood Elementary is in town just across the highway. Pacific High School is about 5 miles north. Neither school has a certified librarian so volunteers manage the libraries during the school day.

This week I helped Cheryl weed the high school collection. I think we discarded half of the books as most volumes were so very outdated. I felt like I was getting back in the groove for a new school year again. 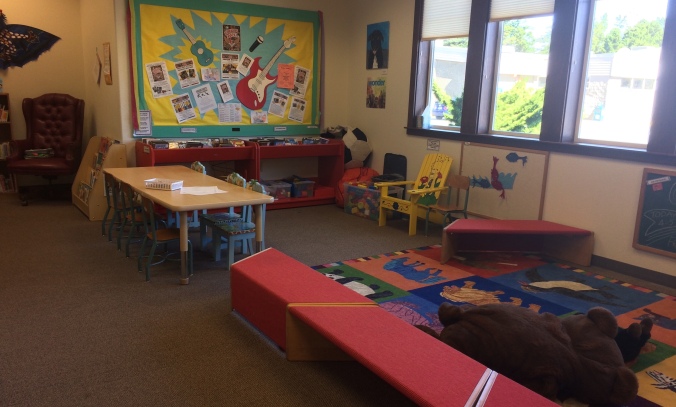 The hallway displays local artists’ works, a carrousel of free paperbacks and a shelf of older magazines.

The Friends of the Port Orford Library was formed in 1982 and helped promote the formation of a Tax District. Still searching for their true mission, librarian Bonnie Wagner spoke at a meeting about the need for the organization. She said the Friends are “the icing on the cake” for the library, providing funds for activities not in the budget. Besides a Christmas Bazaar, they hold a twice-annual used book sale.

Their Unique Boutique, located on the southern end of the hallway, sells used treasures. 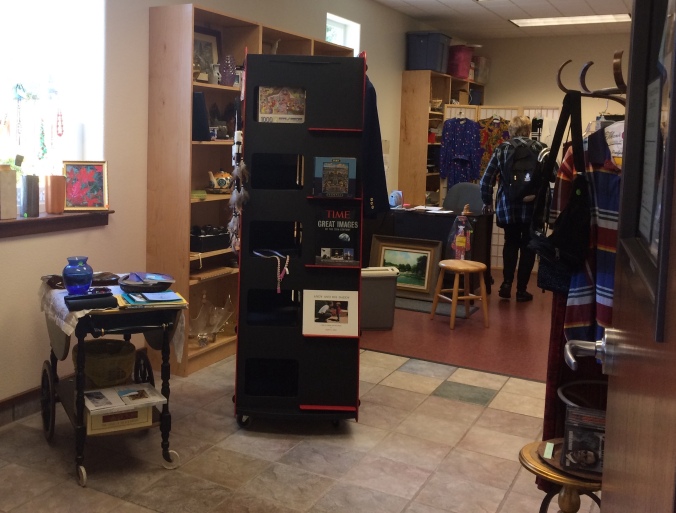 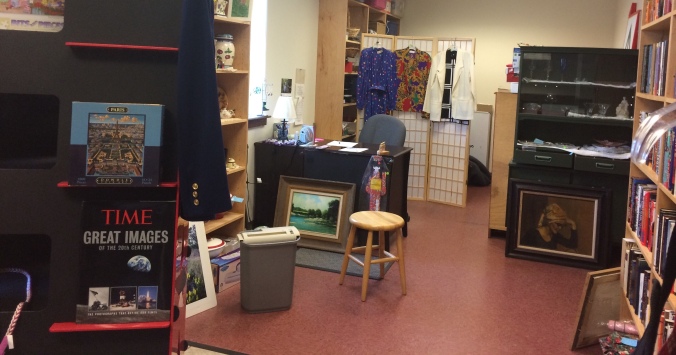 Thank you, Denise, for bringing me out of retirement for a couple of hours each week. I will miss so many people here: Wendy, Cheryl, Kyle, Alice, Penny, Midge, people whose names I cannot remember, patrons, and especially Daisy. Thank you for making me feel right at home.