From Fort Dick and Crescent City we continue south on Highway 101 until we pick up Highway 1 in Leggett.

What are we thinking? …The curves and swerves, twists and turns, narrow and steep roads of Highway 1 in a 35-foot motorhome towing a car on a dolly? The bungee cord on the refrigerator pushes the doors of the appliance open from the weight of beverages on a shelf. Then something flies off from somewhere as we hear a noise and see an airborne disc on the camera view of our car and tow dolly. We pull over when we find some turn-off space and I walk back along Highway 1 looking for our missing object. And there it is lying in the middle of the road… the base plate of one of our leveling jacks.

But these spectacular views make it all worthwhile… 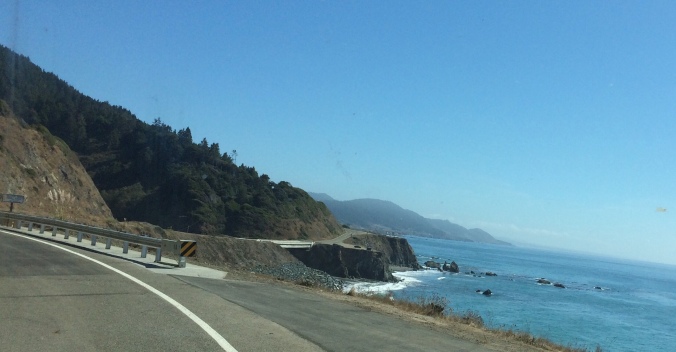 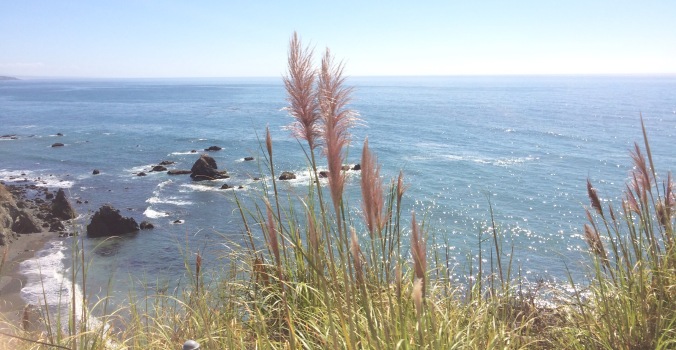 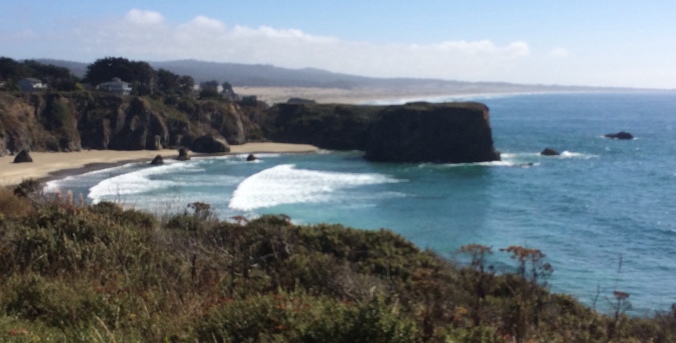 After a long, stressful day of driving, (Jeff, you have earned the nickname Mario) we reach our 2-night destination in Fort Bragg.

According to en.m.wikipedia.org, Fort Bragg was founded prior to the American Civil War as a military garrison where troops were stationed to guard the home base. It was never intended to be a military fortification for defending the territory.

But before all this, the area was home to Native Americans most of whom belonged to the Pomo tribe, prehistoric hunter gatherers who lived along the northern coast of what is now California.

In 1856 the Mendocino Indian Reservation was established along the Noyo River. A year later, Lt. Horatio G. Gibson from San Francisco established a military post on the Reservation and named it after his former commanding officer Capt. Braxton Bragg. During the Civil War, Bragg became a General in the Army of the Confederacy. In 2015 members of the California Legislative Black Caucus unsuccessfully petitioned the mayor of Fort Bragg to change its name due to its links to the Confederacy.

In October of 1864 the military post was evacuated and abandoned. The Mendocino Indian Reservation was discontinued in March of 1866. By 1869 small lumber mills were built at the mouth of every creek. The land of the Reservation was returned to the public and sold for $1.25 per acre to settlers who established ranches.

After crossing the Noyo River you can see where we will be staying. Notice the RVs in the upper left hand corner in the picture below.

We are backed up to the Pomo Bluffs Park. See that dot of red in the center of the picture below? That’s Jeff, and to his left is our Georgetown Motorhome.

The view from our back window…

Unfortunately the clouds interfere with the sunset. Instead of colorful swirls of orange, pink, and magenta, all we see is a bright white disk sinking below the horizon. We fall asleep to the lullaby of the constant foghorn announcing the approaching harbor… 💤

One thought on “Highway 1”