The views below are taken from Pomo Bluffs Park, 25 acres of land on the southern bluff overlooking Noyo Bay. Harbor RV Park sits adjacent to the Bluffs and our RV backs up to the park fence.

The red circle below shows the whereabouts of our RV… 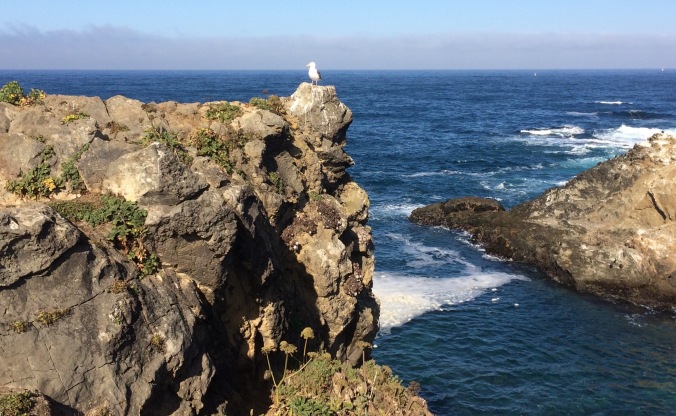 A fishing vessel enters the harbor. That’s Noyo Headlands and Beach in the background. 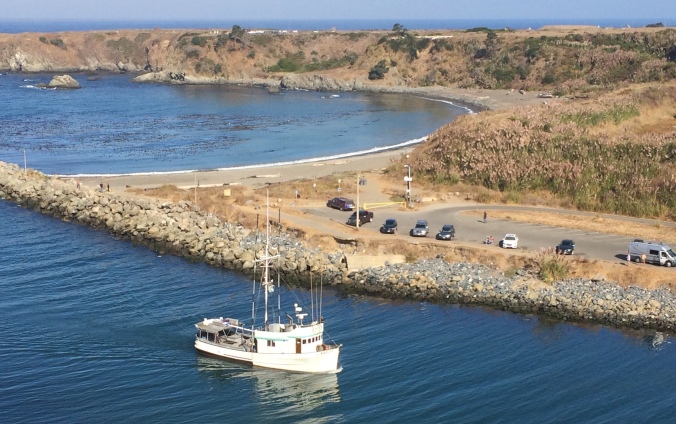 The name No’Yo is a Native American Pomo word meaning “under the dust.” It originally referred to a seasonal campsite where the Pomo settled further north of Fort Bragg. When the tribe relocated here they brought the word with them. (plaque on Pomo Bluffs)

These 3 gravestones in a pioneer cemetery on the headlands are believed to contain the remains of 3 soldiers from the Fort Bragg army post.

And here’s a view of the Noyo Bridge, Noyo Beach, and Pomo Bluffs… Look closely to see the white recreational vehicles at Harbor RV Park. 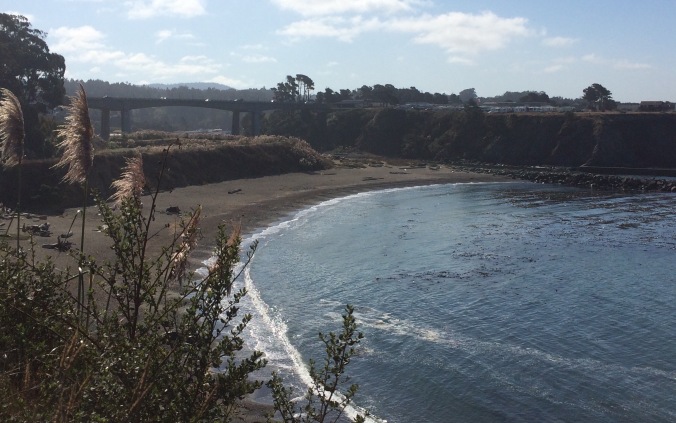 Fort Bragg had an established lumber port at Noyo Harbor by 1873. The Union Lumber Company was founded in 1891 by absorbing most of the smaller lumber mills in the area. In 1901 the Union Lumber Company incorporated the National Steamship Company to carry lumber, passengers, and supplies. Manufactured creature comforts and necessary staples such as sugar and coffee were delivered by steamship because the wagon roads were long and impassable, especially during winter. 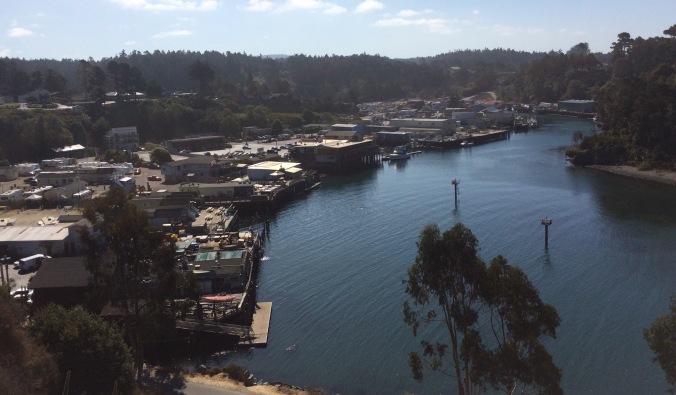 Of course commercial fishing has also played an important role as a major economic resource. Tuna, salmon, rock cod, and ling cod are abundant in the ocean waters outside of the harbor. Today sport fishing helps support the local economy. (plaque on Pomo Bluffs)

Fishing vessels leave early in the morning and return throughout the afternoon, providing fresh seafood to local markets and restaurants. The Noyo Fish Company offers fresh salmon and rock cod to go as well as the catch of the day. Princess Seafood Market and Deli offers hook and line caught seafood by an all female crew of girls gone wild.

Several restaurants and cafes offer everything from fine dining to clam chowder, to fish tacos, to fish and chips… and for the landlubber, hamburgers. (visitmendocino.com) 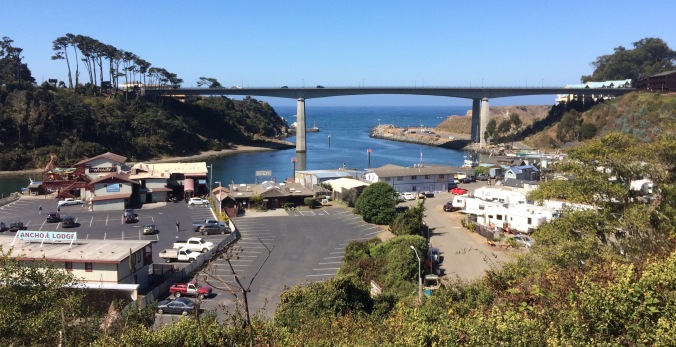 The Noyo Harbor Inn sits above the riverbank and features a restaurant, bar, conference room, deck, and sitting gardens.

Sacred Woods is a garden of outdoor sculptures, Buddhas, and furniture. Two gift shop showrooms are loaded with mystical art and whimsically divine gifts from Thailand and Indonesia. (visitmendocino.com)

Between 1906 to 1967 the three glass beaches were city trash dump sites. Cars, batteries, bottles, cans, and appliances were pushed over the cliffs into the ocean. This was a common practice of seaside cities throughout the world for many  centuries. Battered by wind, waves, rocks, and weather, the trash eventually broke down into smooth, colorful sea glass. (fortbragg.com) 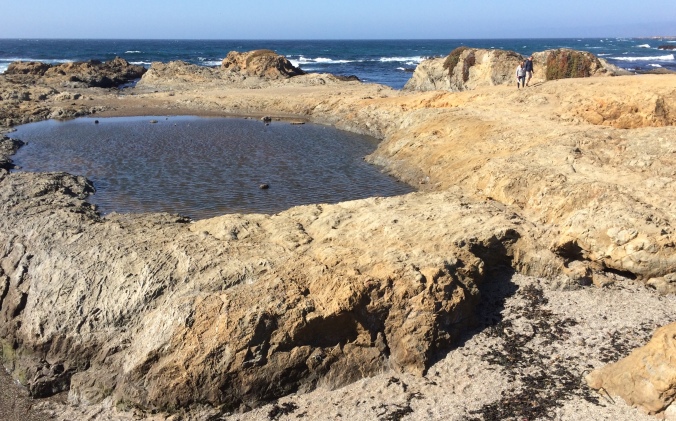 The website cautions visitors to snap a photo, but leave the glass behind for others to discover. 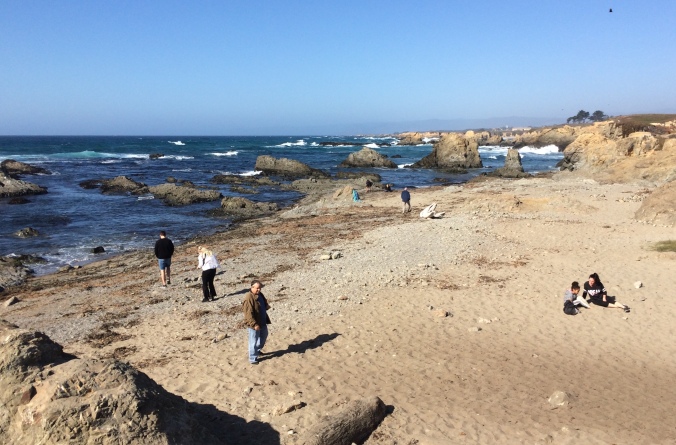 So, you can imagine my disappointment when no colorful sea glass was evident ANYWHERE! 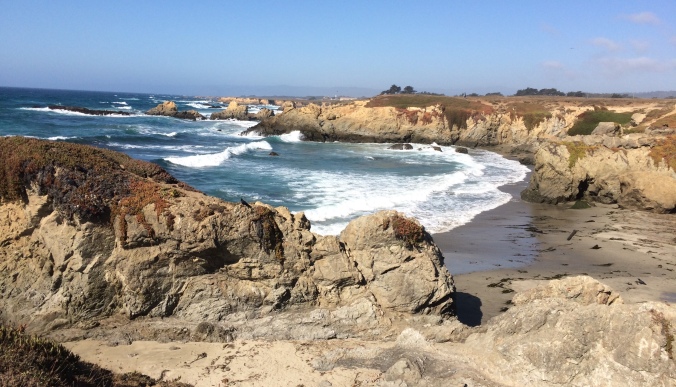