Point Lobos marks the north end of the Big Sur Coast. The next 90 miles have no towns, just countless cliffs, coves, and beaches linked by Highway 1. (americansouthwest.net)

This bridge  is an iconic feature of postcards, TV car commercials, and countless ads. The parabolic shape of the arch (a symmetrical U-shaped plane curve), the tall spandrel columns (the triangular space between the tops of adjacent arches) and the upright support of the superstructure contribute to its aesthetics.

Completed in 1932 for just over $200,000, it’s concrete span soars 260 feet above the bottom of a steep canyon carved by Bixby Creek. Building the bridge was a challenge. First a massive wooden framework had to be built. Materials were brought in by truck on what was then a narrow, one-lane road full of hairpin turns. Forty-five thousand individual sacks of cement had to be hauled up the framework. Each bag was transported by a series of platforms and slings suspended by cables 300 feet above the creek.

The bridge span was completed before the rest of Highway 1 linking Monterey to San Luis Obispo. That would happen 5 years later. (visitcalifornia.com)

Squirrely critters steal the show in the parking areas…

The lighthouse is the silhouette to the right, on the downwards slope of the volcanic rock just off-shore of the coast. The dwellings and supporting buildings rest on the plateau to the left.

On August 1, 1889 the first lighthouse keeper and 3 assistants reported for duty, bringing their families with them to live a very self-sufficient and isolated life.

Each family was allotted a garden area to grow fresh vegetables. There were no roads back then, only a long and treacherous trail to Monterey and a shorter mail/supplies run to what is now Pfeiffer Big Sur State Park in a horse and wagon provided for by the U.S. Lighthouse Service.

Bulk supplies such as coal, firewood, animal feed, and some food arrived every 4 months on a long broad ship called a lighthouse tender, specifically designed to service remote lighthouse stations inaccessible by land.

With the completion of Highway 1 in 1937, the lives of the lighthouse keepers and their families became so much easier. (pointsur.org)

From Fresnel to Aero Beacon…

The lighthouse originally contained a first-order (the largest) Fresnel lens. It consisted of 16 panels of prisms, each with a “bullseye” in the center surrounded by concentric rings of prismatic glass. Each ring projects a short distance beyond the previous one. Additional reflecting prisms are located above and below the center. As the cylinder of prisms turns, each panel collects and bends light into a single focused beam. Light from Point Sur’s Fresnel lens was visible for 23 nautical miles.

This lens was in use until the 1970s when it was replaced by a modern aero beacon mounted on the roof of the fog signal room. In 1978 the aero beacon was moved into the lighthouse tower. In 1974 the last lighthouse keeper left Point Sur. Today a U.S. Coast Guard crew services the lighthouse regularly. (pointsur.org)

Docent-led 3 hour tours are available Saturday, Sunday, and Wednesday for $15. For $10 more, moonlight tours are offered once or twice a month April through September.

The Esselen people lived in the Big Sur region for thousands of years before Europeans came to California. It was once believed that they were completely destroyed by European contact and the domination of Spanish missions in the area. But now we know that some members avoided missionization by retreating far into the Santa Lucia Mountains until the 1840s, before dispersing to find work on local ranches.

Henshaw and Harrington interviewed native elders, such as Isabel Meadows in the early 1900s, in order to preserve some of the Esselen Language. (plaque at viewpoint off Highway 1)

Esalen is a nonprofit retreat center and a planned residential community whose members hold a common social vision and often follow an alternative life style sharing responsibilities and resources.

Founded by Stanford graduates Michael Murphy and Dick Price in 1962, Esalen supported alternative methods for exploring human potentialities, strongly influenced by Abraham Maslow’s theory of self-actualization. They believed the net effect of individuals cultivating their potential would bring about positive social change. Their vision was to create a venue where non-traditional workshops and lecturers could present ideas free of the dogma associated with traditional education. (en.m.wikipedia.org)

The grounds of the Esalen Institute were home to the Esselen People as early as 2600 BC.

In September of 1882 Thomas Slate filed a land patent under the Homestead Act of 1862 and named the settlement Slates Hot Springs. This became the first tourist-oriented business in Big Sur as people seeking relief from physical ailments came to soak in the natural hot springs.

Henry Murphy, a physician from Salinas, California and the grandfather of Esalen’s co-founder Michael Murphy, purchased the land in 1910.

Turning around and Heading back…

Hikes Along the Way…

This 80-foot falls, named after Christopher McWay, a farmer from New York who settled here in 1874, cascades onto the sandy shore.

Until 1983 the waterfall poured directly into the Pacific Ocean, but a fire, landslide, and highway construction since then filled the cove with enough materials to create a sandy beach and push it out several dozen feet toward the ocean.

About a mile out and back, this trail is more of a walk than a hike, but well worth it. (hikinginginbigsur.com) 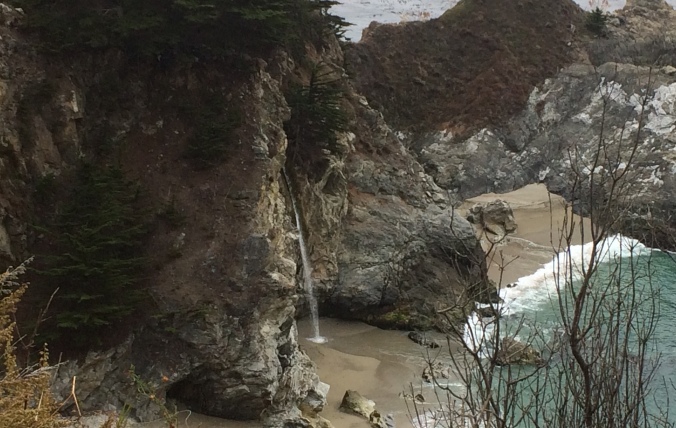 This 2 mile out and back trail is a steep hike through a tree-lined canyon leading to a rocky beach detour and then through a 60 foot tunnel leading to a secluded cove. In the late 1800s John Partington set up a business harvesting and hauling bark from the tanbark oak tree down to ships anchored in the relatively calm and deep waters of the cove. Mules pulled sleds loaded with bark, with wheels in front and rails in back, down through the canyon.

During Prohibition it was rumored that the cove was a favorite landing point for smuggling liquor. (hikinginbigsur.com) 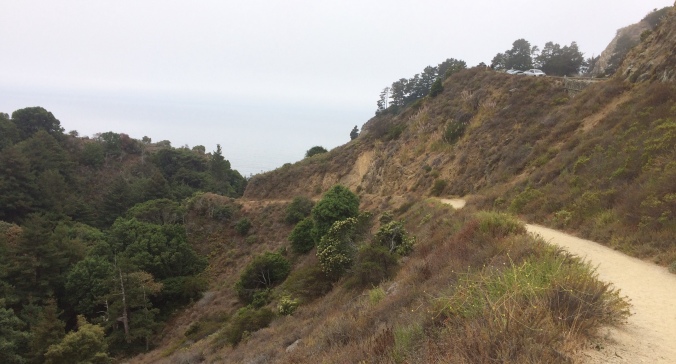 Heading Out to the Rocky Beach… 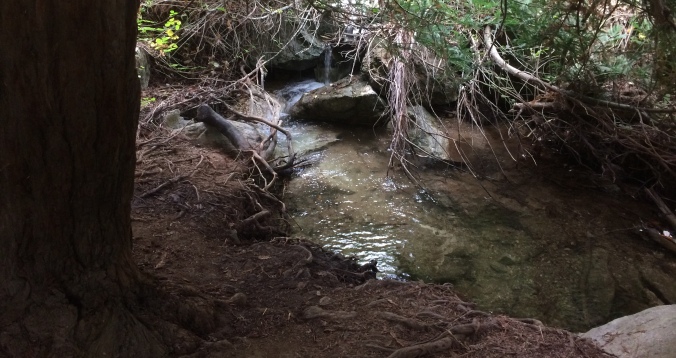 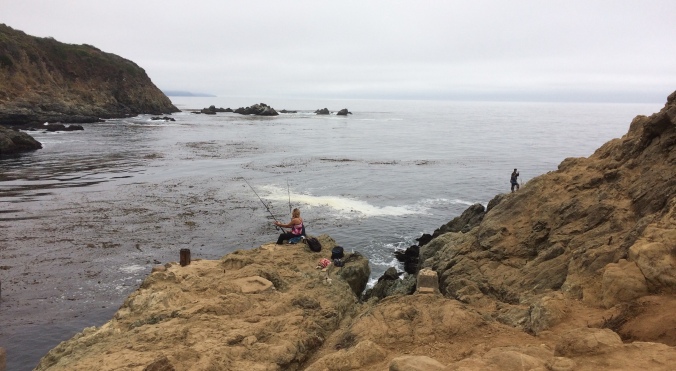 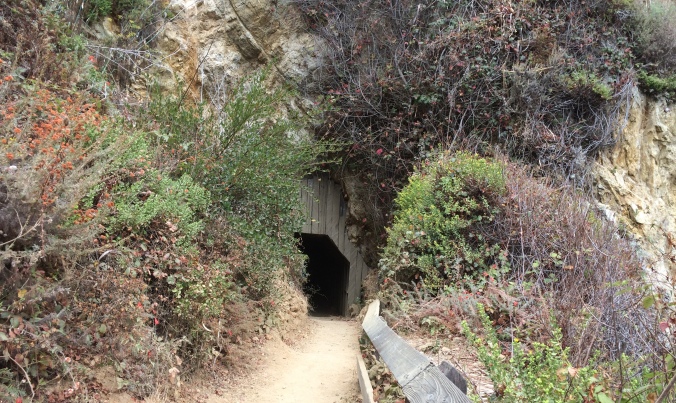 Up to the Trailhead…