In 1906 President Theodore Roosevelt established Mesa Verde as a National Park to preserve and interpret the cultural and archeological heritage of the Ancestral Pueblo people who lived here between 600 – 1300 AD.  The Park protects nearly 5,000 known archeological sites including 600 cliff dwellings. (park brochure)

The Park is divided into 2 sections:

…and towers over Mancos Valley… 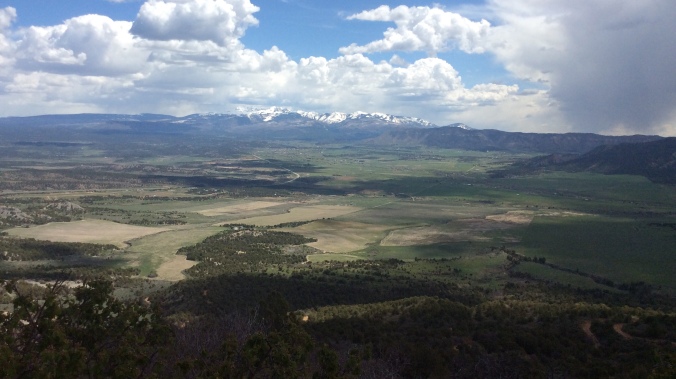 We head to Chapin Mesa Archeological Museum, 20 miles from the Park entrance. Beginning around 7,000 feet above sea level in the high desert of the Colorado Plateau…

…we eventually reach an elevation of 8,572 feet half way there at Park Point Overlook’s Fire Tower. But before reaching the highest point in the Park, we stop at a historical viewpoint, Knife’s Edge.

What looks like a trail in the picture above is really the remains of the Knife Edge Road, completed in 1914, as the first automobile access into the Park from Mancos, CO.  The trip took 3 hours and each vehicle was charged one dollar. Eventually surfaced with asphalt, this section of the road was abandoned in 1957 with the completion of the present day tunnel.

Here we are at the Fire Lookout at Park Point Overlook, 8,527 feet above sea level. The panoramic views are beautiful, even on a cloudy day! 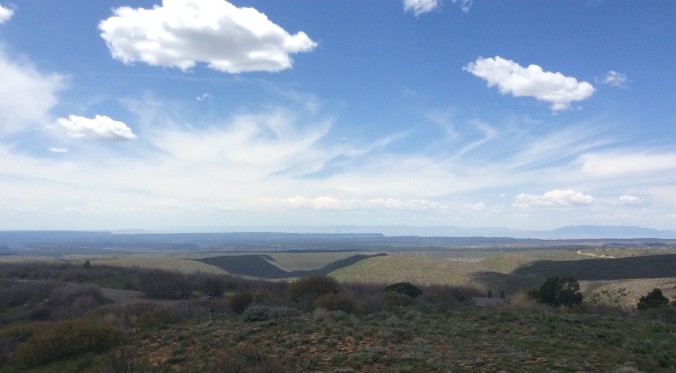 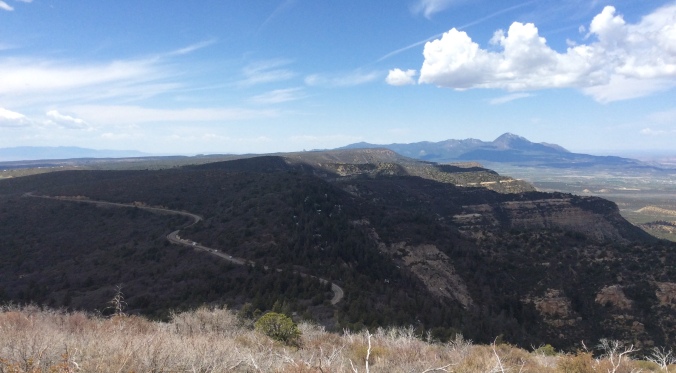 The Far View Sites are our next stop on our way to the Chapin Mesa Archeological Museum.

A thousand years ago this community was a place of family homes and public buildings set among small farm fields. Beginning in the early 1900 s, Far View was a place of active research. Work on these sites helped establish the science of archeology in the Southwest and inspired present-day thinking about how to preserve and appreciate a cultural landscape. (booklet written by Lillian D. Wakeley and Carol E. Sperling) 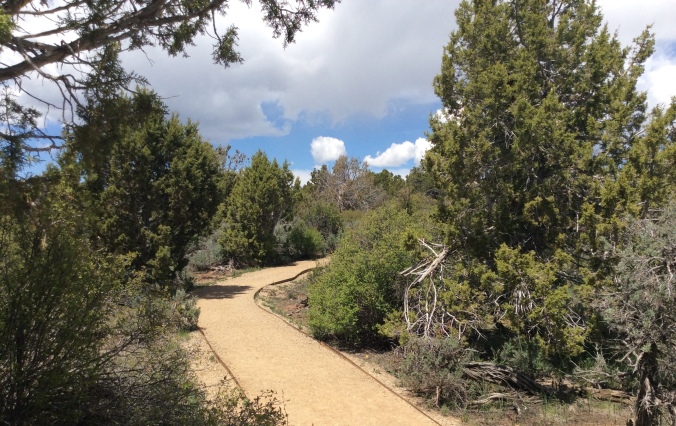 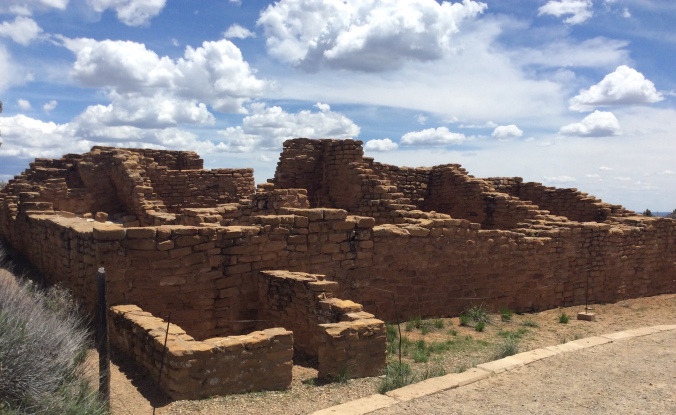 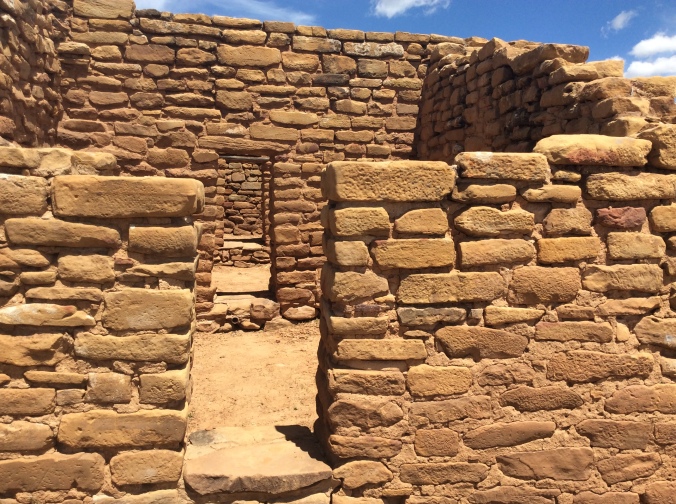 Starting around 800 AD Ancestral Pueblo people lived here for several centuries. In the mid-1100s there may have been more than 35 occupied villages and surrounding farming plots within a half-square mile in this area. (park plaque)

Built in 1000 AD, Far View House was the largest building in this community with at least 40 rooms on the ground floor and 30 rooms on the upper story. Specialized architectural features tell us this was a Great House, a central structure at the heart of this village. (park plaque) 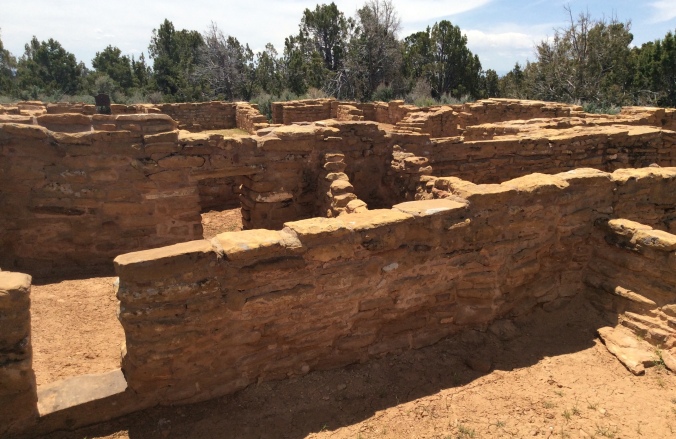 Pipe Shrine House received its name because a dozen decorated tobacco pipes were found in an enclosed area when this site was excavated in 1922 by Dr. Jesse Walter Fewkes. Along with the pipes, there were some small carved stone figures and pottery which Dr. Fewkes interpreted as a religious shrine. These artifacts were found in one of the kivas pictured below. (park plaque)

Kivas were strongly built circular rooms, often underground. Upright stone pillars, called pilasters, supported a thick roof of timbers and soil. Entry was via a ladder through an opening near the center of the roof. Insulated by the earth, a kiva was easy to warm in winter with a small fire, while smoke rose through the entryway. A ventilation shaft drew fresh air in from outside, and a deflector directed airflow away from the fire. (booklet written by Lillian D. Wakeley and Carol E. Sperling)

Like a “Where’s Waldo” puzzle, this spiral design is carved into one of the outside walls.

This village was excavated in 1968. Researchers found and studied multiple layers of soil, buried pottery of different styles, walls built over older walls, and bits of wood, all of which helped determine that people built multiple structures here from 700 AD into the early 1200s. (booklet written by Lillian D. Wakeley and Carol E. Sperling) 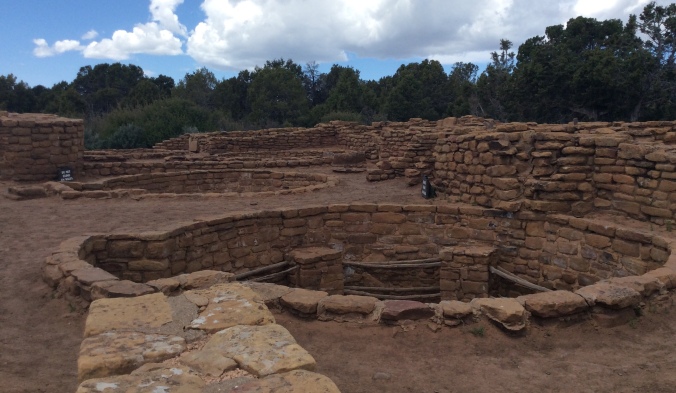 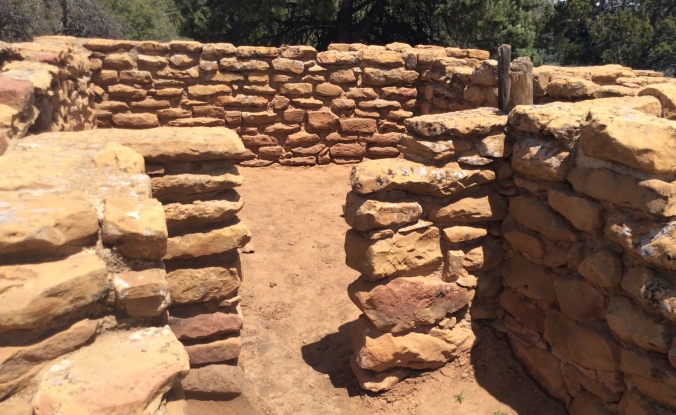 Below are mealing bins for storing ground corn and other seeds. Manos and metates were the names of these grinding stones. (park plaque) 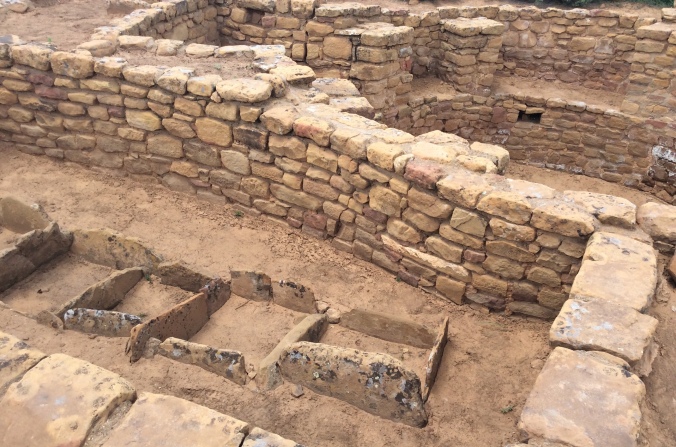 Like most of the homes and villages in the Far View Community, Coyote Village was constructed long before Mesa Verde’s cliff dwellings. Starting before 975 AD, this village was built, occupied, abandoned, rebuilt, and reoccupied several times. Each time people returned, they reused some of the stones and timbers, adding to or remodeling rooms their ancestors built. (park plaque)

Pottery shards found under and outside these walls reveal that the oldest sections of this building date to about 959 AD and final construction was completed about 1200 AD.  Pollen studies show the presence of water in the reservoir is indisputable. Some researchers also note similarities of the youngest inner walls to dance plazas in modern historic pueblos. This site was used for 250 years, so isn’t it possible that Ancestral Pueblo people used it in different ways at different times? (booklet written by Lillian D. Wakeley and Carol E. Sperling)

This site gets its name from Dr. Jesse Walter Fewkes who excavated the site in 1922 and thought the large stones at the base of some of the walls were unusual. (Later, archeologists learned that ancient peoples often used large flat stones, possibly because they reduced the number of individual stones needed.) (park plaque) 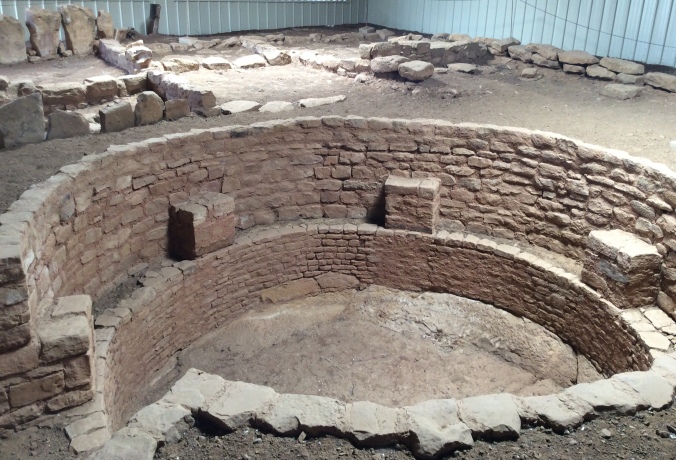 This small collection of rooms was probably home to an extended family. Its layout, several living and storage rooms surrounding a kiva and courtyard, is known as a “unit pueblo”, and represents a typical family home of the late 1100s. Only half of this home is visible. Leaving a structure unexcavated or backfilling it after study protects it from exposure and deterioration. (The Far View Sites are more exposed to wind and weather damage than the alcove dwellings. After the Ancestral Pueblo people left this area, weathering gradually knocked down the upper walls.) (park plaque)

By the time we arrive at the Chapin Mesa Archeological Museum, we are on information overload! We take a quick peak at Spruce Tree House, (a self-guiding tour of a cliff dwelling that is currently closed indefinitely) purchase tickets for a guided tour of Cliff Palace for tomorrow, try to absorb some of the museum exhibits, and finally call it a day. 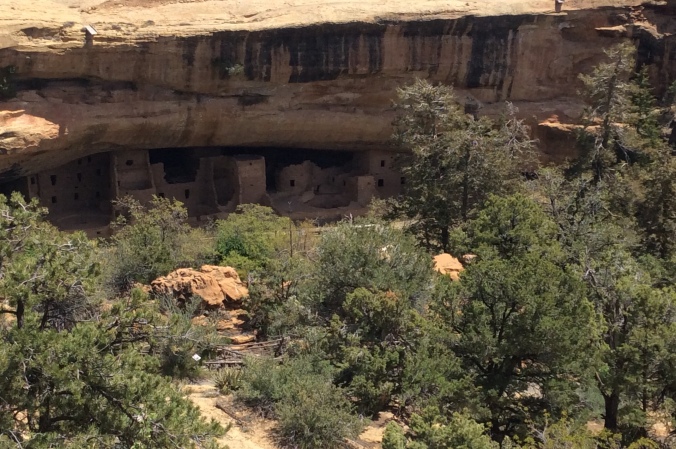 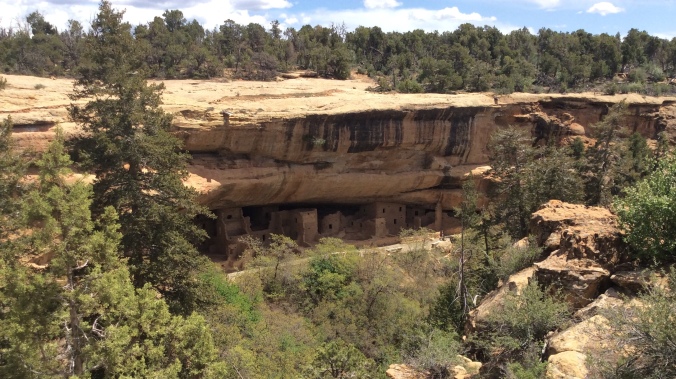