Andy and I take a bus from Islington to Trafalgar Square to purchase tickets for an open-top bus tour of London. Here we are on the upper level of a double-decker leaving Islington. 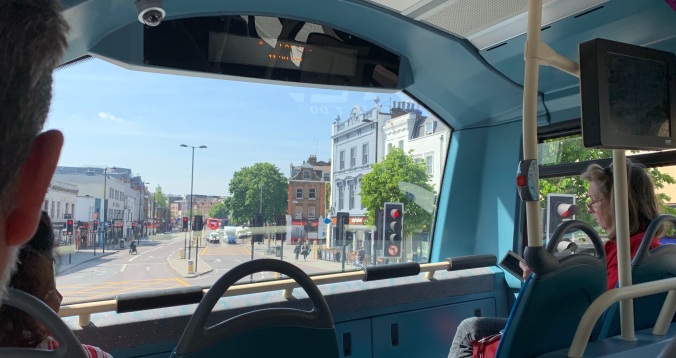 How quaint… This store only sells brollies. 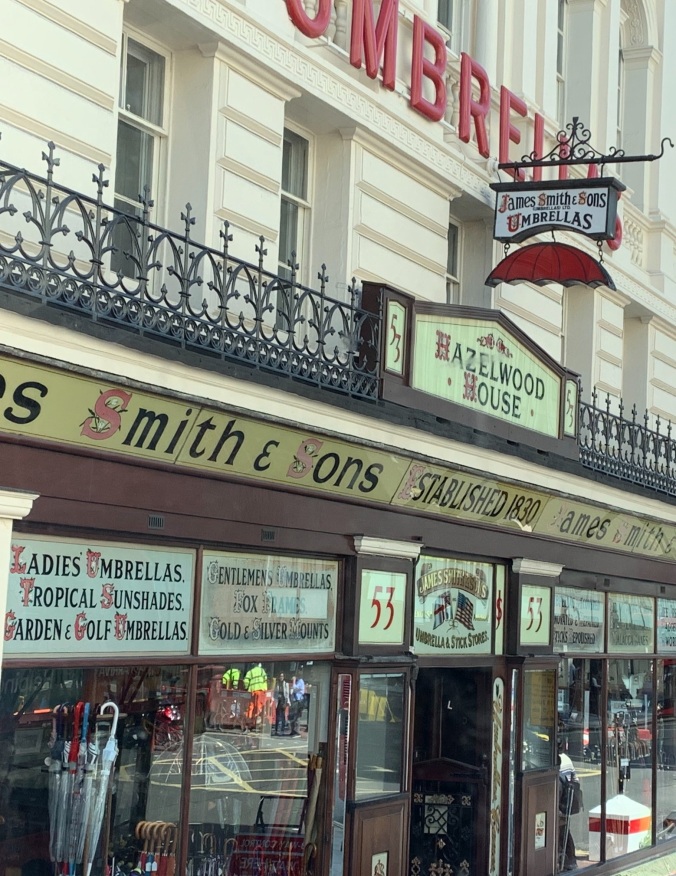 We get off the local bus at Covent Garden and walk through Leicester Square.

Located in the West End of London, Leicester Square was laid out in 1670 and boasts the largest LEGO store in the world. (en.m.wikipedia.org) I took a picture of a replica of Big Ben in the window, but the glare from the glass ruined the shot. So, here’s one I found online taken in the evening: 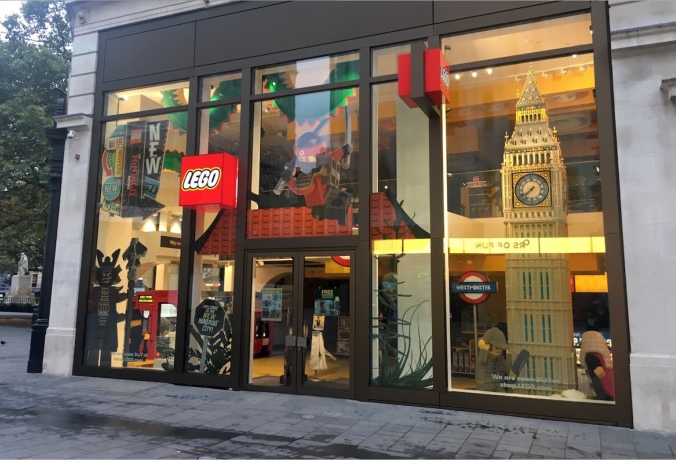 A park lies in the center of the Square. 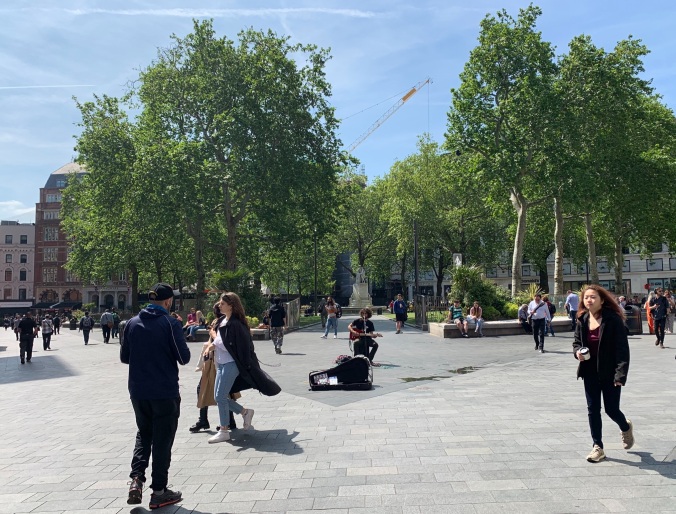 We head for Piccadilly Circus… 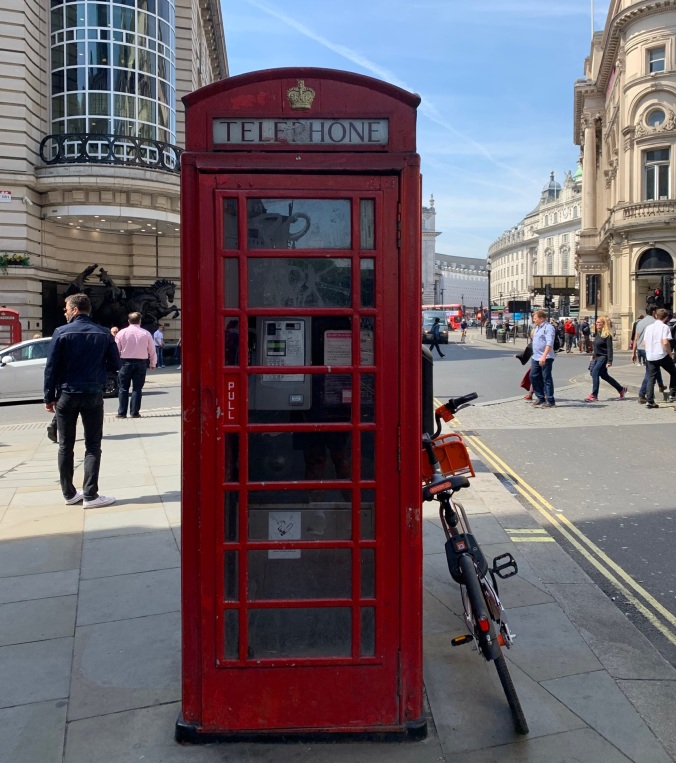 Piccadilly comes from the name of a 17th century frilled collar called a piccadil. Robert Baker was a famous tailor who became rich making piccadils for wealthy patrons and nobility. In 1612 he built a mansion here. The locals, however, disliked Robert Baker and called his mansion Piccadil Hill behind his back. (en.m.wikipedia.org and thepiccadillywestend.co.uk)

This is the Shaftesbury Memorial Fountain named after a Victorian philanthropist. The centerpiece statue is often mistaken for a replica of Eros, the Roman god of romantic love. The statue is actually Anteros, the brother of Eros. Anteros symbolizes selfless love in honor of the fountain’s namesake the 7th Earl of Shaftesbury, who was a magnanimous individual. (en.m.wikipedia.org and thepiccadillywestend.co.uk) 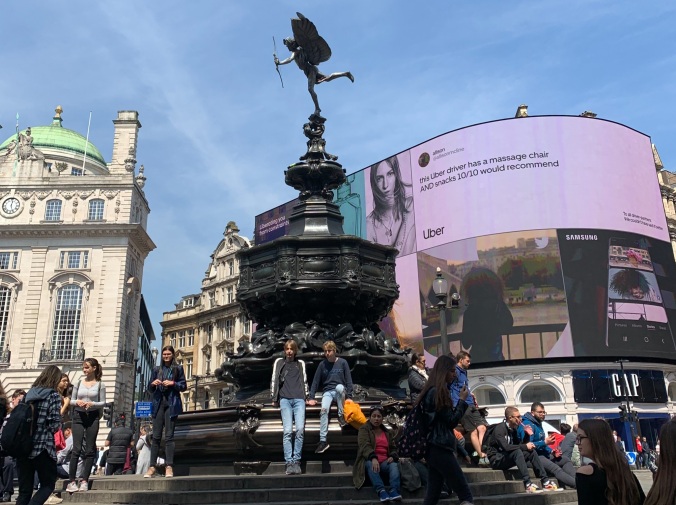 It’s mid-morning and we get to watch Yoda being “suspended” in air. The magic takes place under his long flowing robe. He still needs to put on his left-hand glove. 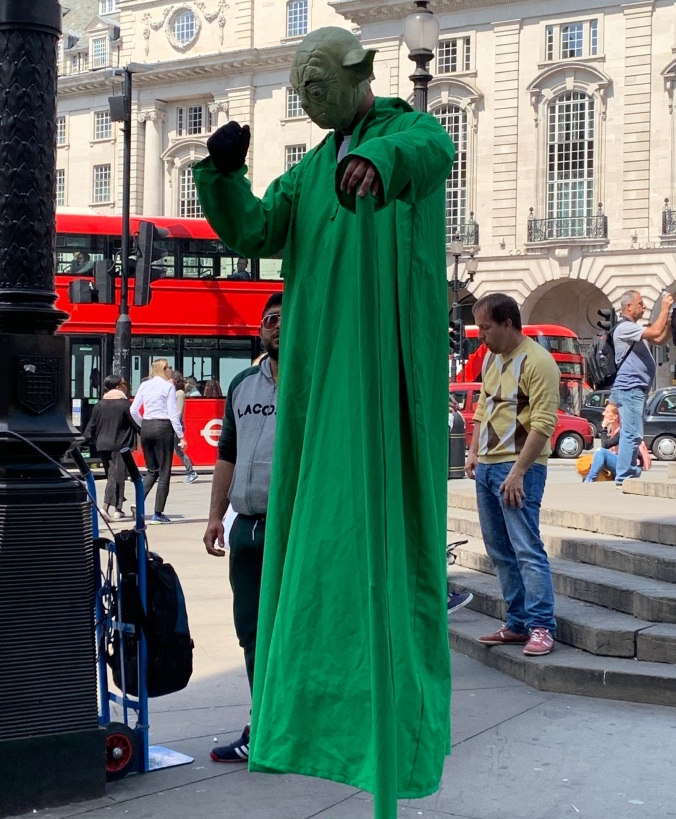 As we continue south toward Trafalgar, the steeples of Westminster Abbey tower over some trees in the distance.

Trafalgar Square is located in Central London in the city of Westminster. Its name commemorates the British naval victory over France and Spain in the Napoleonic Wars in 1805. Since the 13th century this site contained the King’s Mews. Mews is a British name for a row or courtyard of stables and carriage houses with living quarters above them. George IV moved the mews to Buckingham Palace in the 1820s.

Nelson’s Column stands in the center of Trafalgar Square to commemorate Admiral Horatio Nelson who died at the Battle of Trafalgar. It is 169 feet high and is guarded by 4 lion statues. (en.m.wikipedia.org)

The National Gallery is an art museum on the Square, founded in 1824.

Saint Martin-in-the- Fields is an Anglican Church dedicated to Saint Martin of Tours, once the patron saint of France. He is best known for using his military sword to cut his cloak in two in order to give one half to a beggar clad only in rags during winter. (en.m.wikipedia.org)

Below is an equestrian statue of George IV: 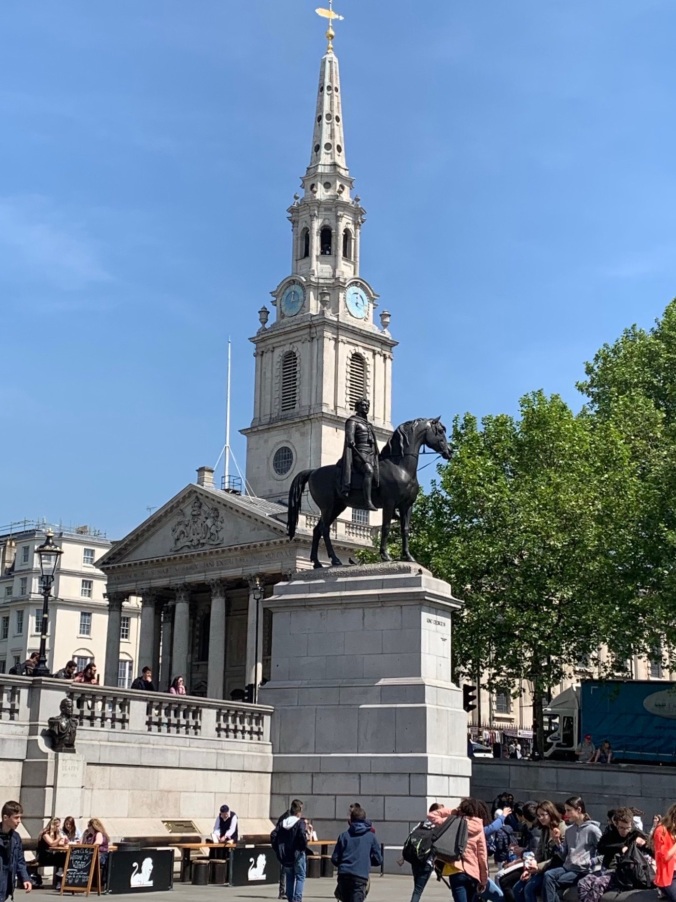 Since 1999 this pedestal below, called the Fourth Plinth, has displayed various exhibitions by various artists. The current artwork, entitled The Invisible Enemy Should Not Exist, is a sculpture of a lamassu, a mythological winged bull creature with the head of a man who stood guard over the city of Nineveh for over a thousand years. The Iraqi-American artist, Michael Rakowitz, has recreated the ancient Assyrian statue destroyed by Isis in 2015. The piece is constructed from 6,000 tin cans of date syrup, symbolizing the rebirth of the lamassu out of ordinary objects from everyday life. (independent.co.uk) 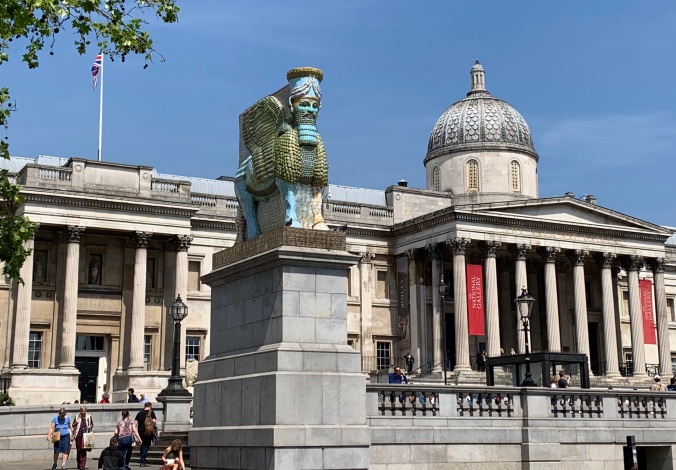 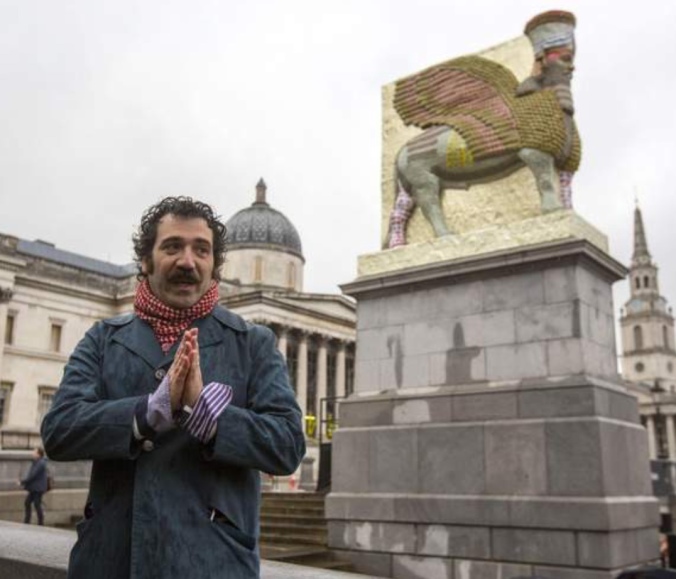 …Andy and I wait for the bus at Stop 6 a few steps west of Trafalgar Square. When we purchased our tickets we are told that the tour buses arrive every 5-20 minutes. And we wait, and wait, and wait, and wait some more along with pairs and clusters of other folks. One tour bus company stops every 10 minutes, but we are all waiting for the The Original Tour. Guides nearby explain to us that traffic is especially busy today. Meanwhile we keep waiting and waiting and wondering and wondering and the gathering crowd keeps growing and growing. FINALLY the tour bus arrives! But there are no seats on the open-top level. We are just lucky to get seats together!

So, off we go past Trafalgar Square and onto the Strand where we drive past the Savoy.

The Savoy, which opened in1889, was the first luxury hotel in Britain. It introduced electric lights throughout the building, electric lifts, bathrooms in most of the lavishly furnished rooms, and constant cold and hot running water.

But before he built this famous hotel, Richard D’Oyly Carte, an English theatrical and musical agent, built the Savoy Theatre in 1881 to host a series of operas written and composed by W. S. Gilbert and Arthur Sullivan. The Savoy Theatre was the first public building in the world to be entirely lit by electricity! Eight years later Carte used profits from producing this duo’s operas to build an opulent hotel next to it to attract foreign clientele as well as British visitors to London. (en.m.wikipedia.org) 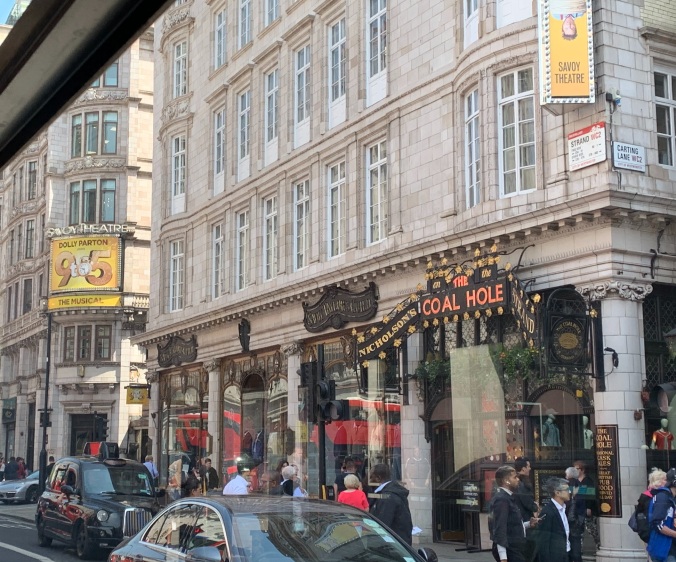 Besides hosting and entertaining members of the Royal family, the Savoy has been the venue of choice for many famous personalities.

Winston Churchill often took his cabinet here for lunch. Laurence Olivier and Vivian Leigh met here. Artists Claude Monet and James Whistler stayed at the hotel and painted or drew views from their room of the River Thames. Richard Harris lived at the Savoy for the last several years of his life. While being carried out on a stretcher before he died, he joked, “It was the food.”

Continuing along the Strand we pass Saint Clement Danes whose bells ring out nursery rhymes. 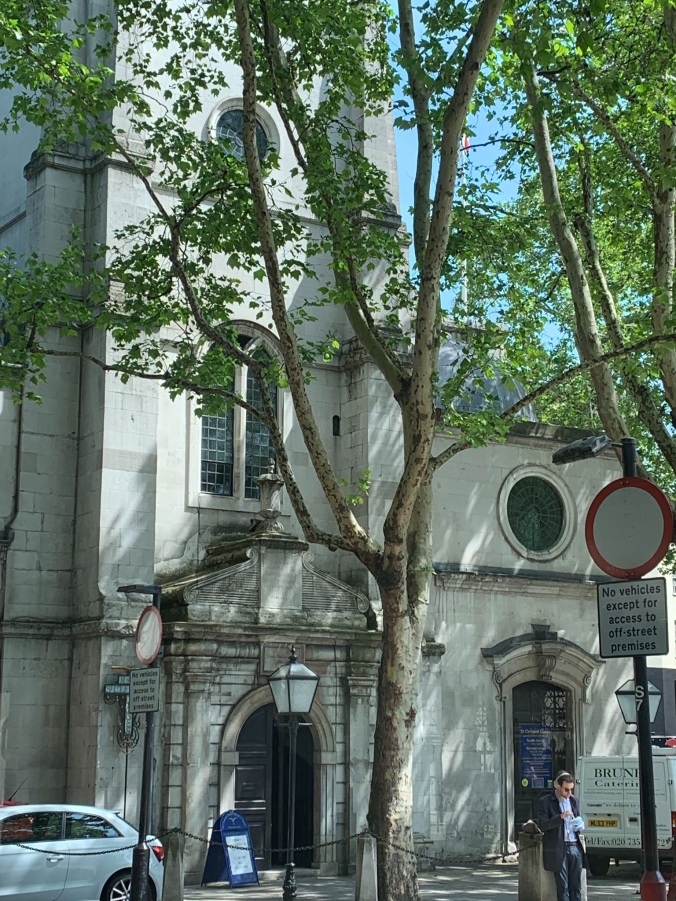 As we pass the side of the church, you can still see the shrapnel marks left behind from the bombs of WWII.

The original Twinings on the Strand has been here for over 300 years. In 1706 Thomas Twining opened Tom’s Coffee House in this same storefront. As an apprentice for an East India Company, he learned the trade business firsthand, importing goods from exotic locales, especially coffees and teas. Tom’s Coffee House specialized in serving and selling coffee to the male aristocracy, but his specialized tea blends also became quite popular, so popular in fact, that within a decade Thomas Twinings ceased serving coffee altogether and sold dry packaged teas. This allowed women to enjoy a cup of tea at home since coffee houses were male-only establishments. (atlasobscura.com)

I was surprised to discover that tea was not always the national beverage of Britain. In the 1660s a Portuguese Queen first introduced tea to the country. Its popularity took over with the expansion of East Indian trade and merchants like Thomas Twinings. (atlasobscura.com)

In 1837 Queen Victoria granted Twinings a royal warrant, assuring the company the honor of providing tea to the royal family ever since. (atlasobscura.com)

Dragon statues, like this one, mark the boundaries around the city of London. (I cheated here with this picture. Do you notice there are no glaring reflections from the bus window? Remember we are sitting on the lower level of the tour bus. This picture was taken a day later while Andy and I were walking through the city.) 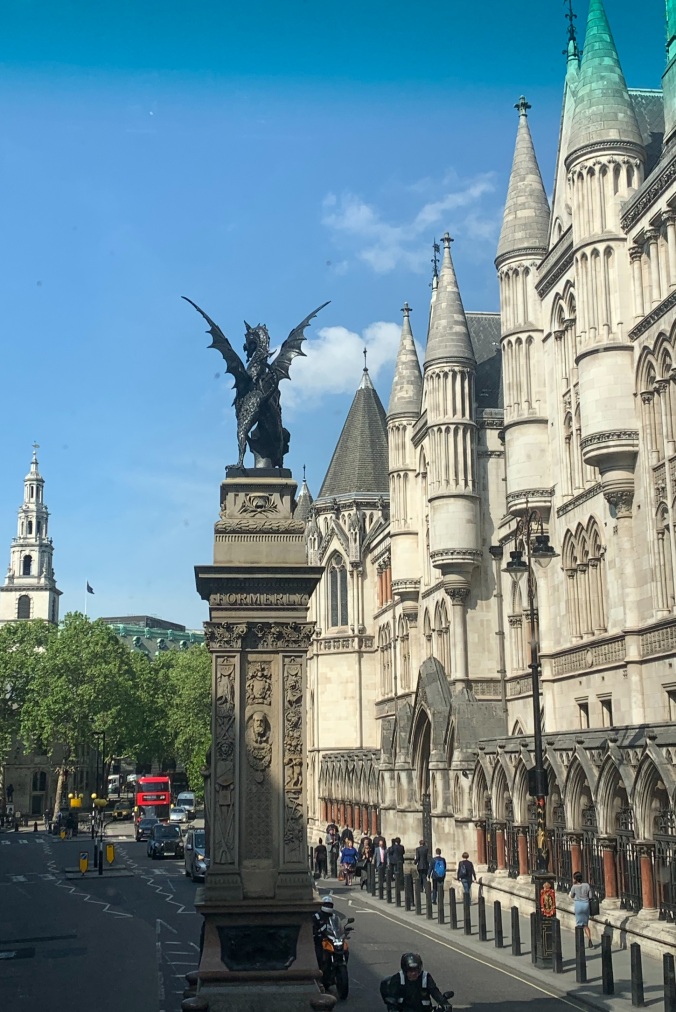 Here’s my original photo taken from the lower level of the bus:

Google Maps shows the boundary of the city of London and where the dragon statues are located.

The Demon Barber of Fleet Street is Sweeney Todd, not Roger, of the barber shop below. 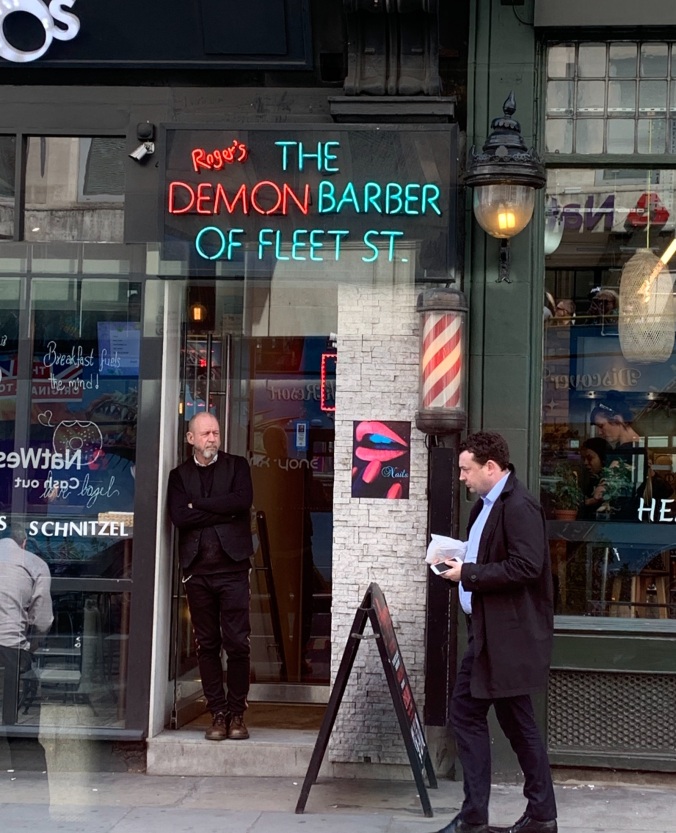 You may be familiar with the Broadway musical and film named after this fictitious barber who pulled a lever on his victims while they sat in his barber chair, causing them to fall backward through a trap door into the basement of his shop. If the fall didn’t kill his victims by breaking their necks, Sweeney Todd would finish them off by slashing their throats with his straight razor. After robbing the victims, Todd and Mrs. Lovett would bake the bodies into pies and sell them to unsuspecting customers at Lovett’s pie shop.

The character of Sweeney Todd first appears on November 21, 1846 in the weekly publication The People’s Periodical and Family Library. For the next 17 weeks the serial continues until the story ends on March 20, 1847. Penny dreadful is the term applied to this type of popular serial literature in 19th century Britain. Each installment was cheap, probably costing no more than a penny, and the subject of the story was of a sensational and dreadful nature highlighting the exploits of detectives, criminals, or supernatural characters. (en.m.wikipedia.org)

So, there you have it… 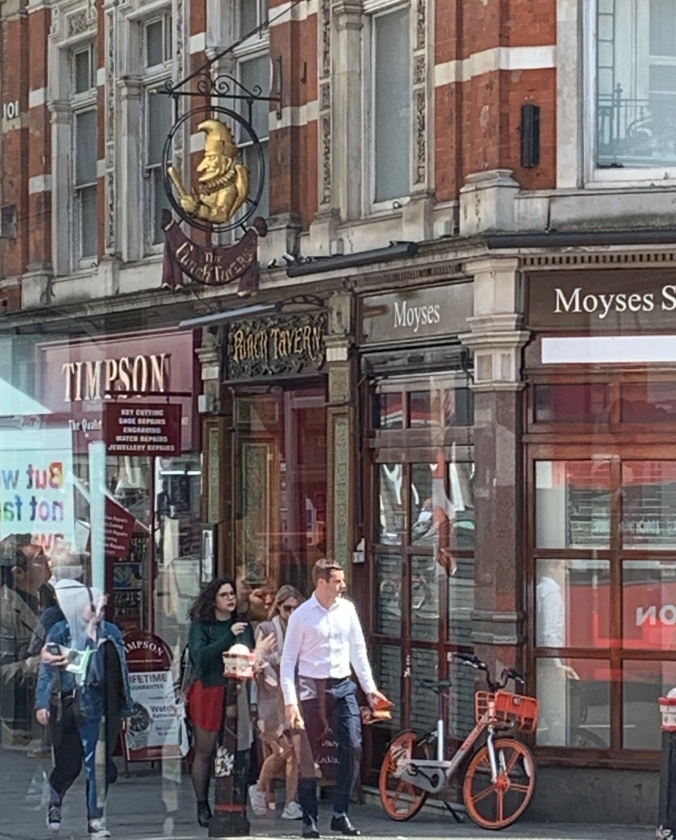 In the 1840s the pub, the Crown and Sugar Loaf, was renamed the Punch Tavern because of the popularity of Punch Magazine and the fact that the magazine offices were nearby. (en.m.wikipedia.org)

Meanwhile, Andy and I keep hoping people from the upper level will get off the bus so we can make our way upstairs…