This is the official residence of the Archbishop of Canterbury, located on the south bank of the River Thames. The Houses of Parliament lie on the opposite bank. (en.m.wikipedia.org) 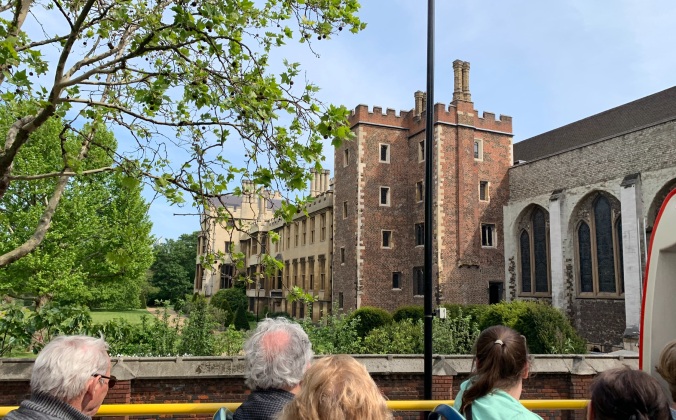 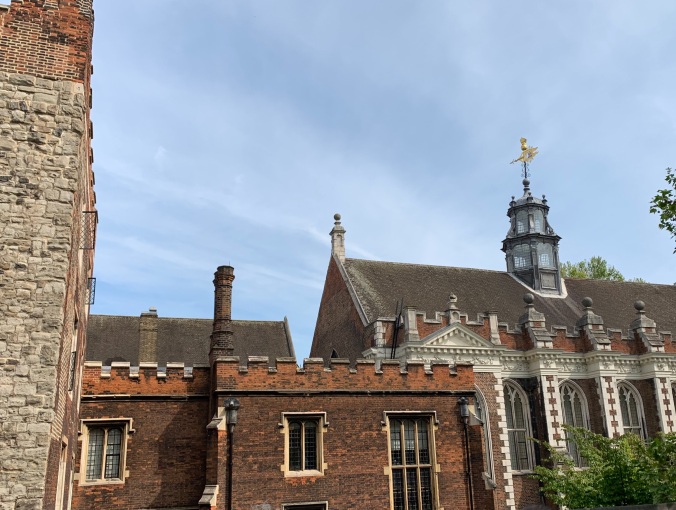 The current archbishop is Justin Welby. He was enthroned at Canterbury Cathedral in March of 2013. (en.m.wikipedia.org) 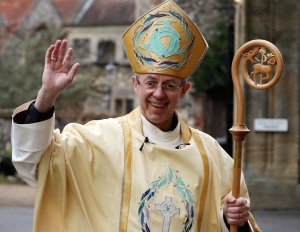 Crossing Lambeth Bridge… a magnificent view of the Houses of Parliament and in the distance, the steeple of Westminster Abbey… 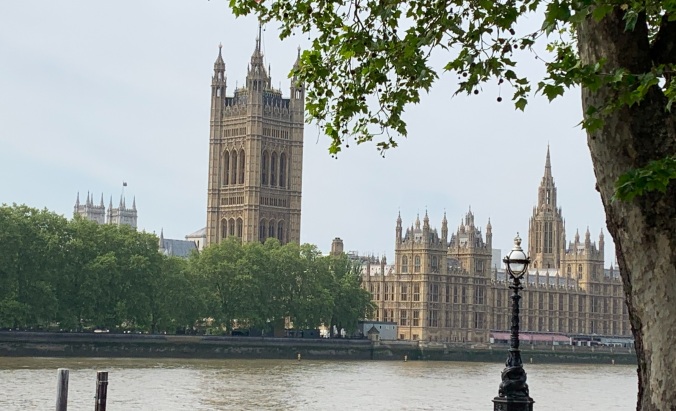 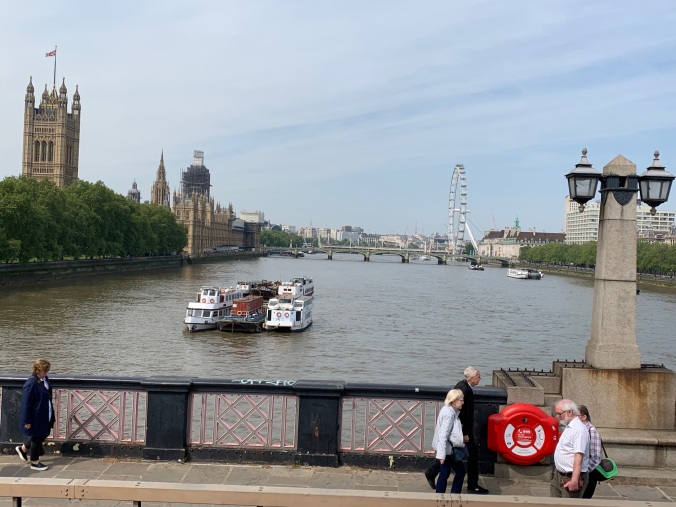 A few minutes after crossing the Thames on the Lambeth Bridge, we drive by a courtyard. Peter, our tour guide, mentions something about St. James Park so I guess this is where we are but I cannot pinpoint this area on my maps.

According to Peter, Elton John lives on the top 2 floors of this apartment building overlooking this square, but again, I cannot verify this.

This famous pub, located at 52 Victoria Street, was built in 1862 and named after Queen Victoria’s husband, Prince Albert.

According to Peter, the Albert was a favorite hangout for Members of Parliament because when they needed to return to vote, the House of Commons Division Bell rang inside.

A network of 384 bells rings throughout the city of Westminster to let the politicians know they have 8 minutes warning before a vote, or division, is about to happen. (bbc.com) 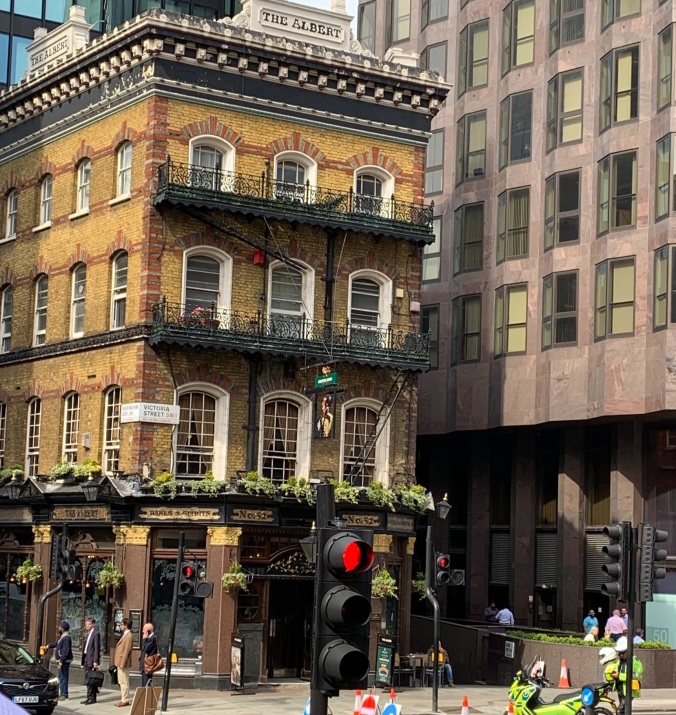 According to Google Maps, (yeah, I checked it out) it takes 4 minutes to travel by car from the Albert to the Houses of Parliament.

The Boy with Yellow Socks

Not far from the Albert, we encounter this painting of a boy wearing a blue coat and yellow socks. This image, on the side of a school building marked the separate entrances for boys and girls in charity schools, called Bluecoat Schools.

The students wore blue coats because blue dye was the least expensive pigment to buy. The socks were dyed yellow with saffron to prevent rats from nibbling at the students’ legs. Fleas from rats were known to cause bubonic plague. (secret-cities.com) 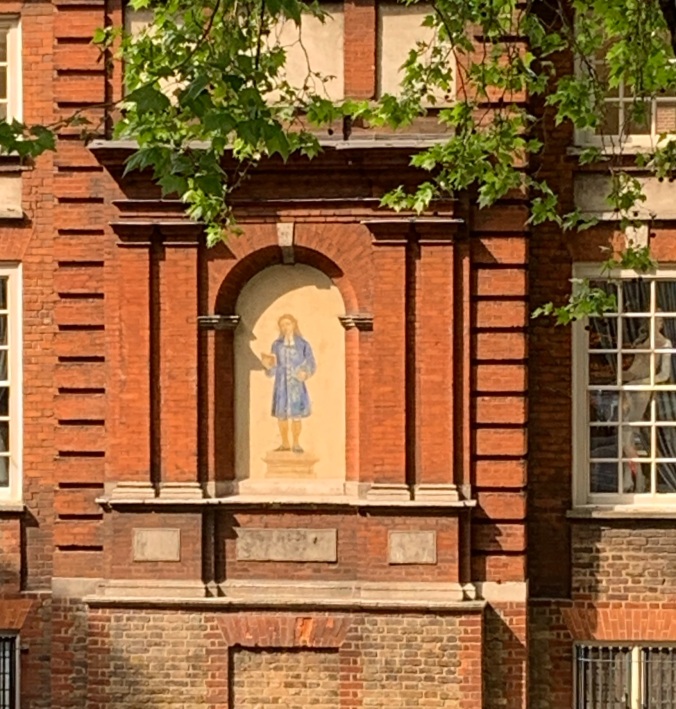 From the 16th century-1773, such schools were set up by philanthropists to educate the poor. Compulsory education started in Britain in 1870 and was made free in 1890. (secret-cities.com) 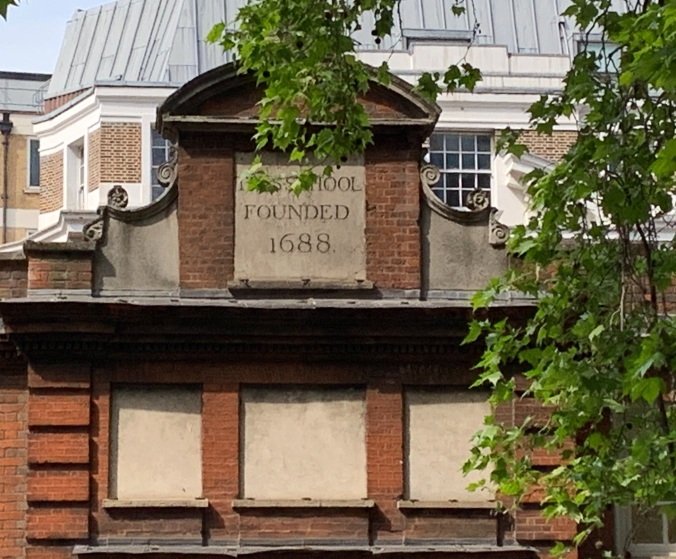 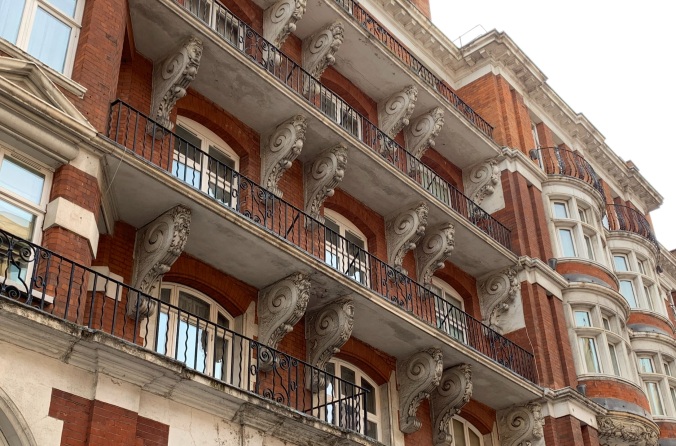 This high-end hotel with plush lodging debuted in 1902. Located in central London, it is just footsteps away from Buckingham Palace and St. James Park, conveniently close to Westminster and Victoria Station, and Heathrow International Airport is only 45 minutes away. (tajhotels.com)

This Victorian splendor was the favorite place for dignitaries to stay when visiting the Royal Family back in the day.

Located 300 yards from Buckingham Palace is Wellington Barracks. This is where the Foot Guards, responsible for guarding the royal family and other state leaders, live. (en.m.wikipedia.org) 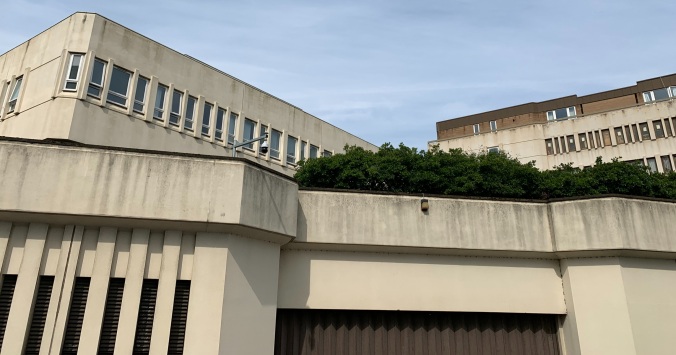 Our tour bus skirts along the side of this famous and historical residence. The gold statue is the Victoria Memorial. 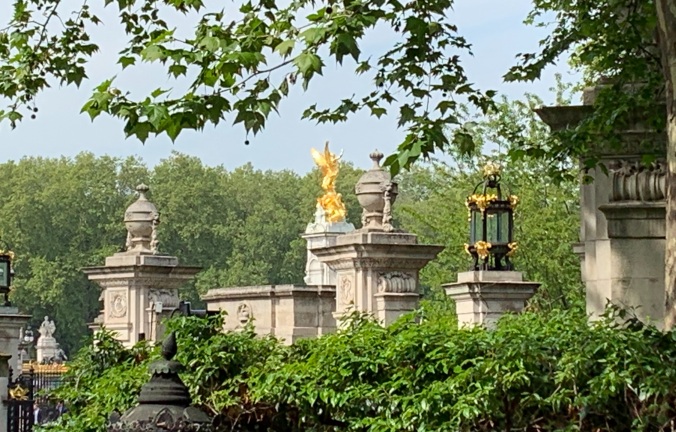 What naively amazes me most is that the Queen lives in the middle of the city of Westminster. I know, how dense can I be? For some reason I pictured Buckingham Palace in a country setting apart from the bustling city. 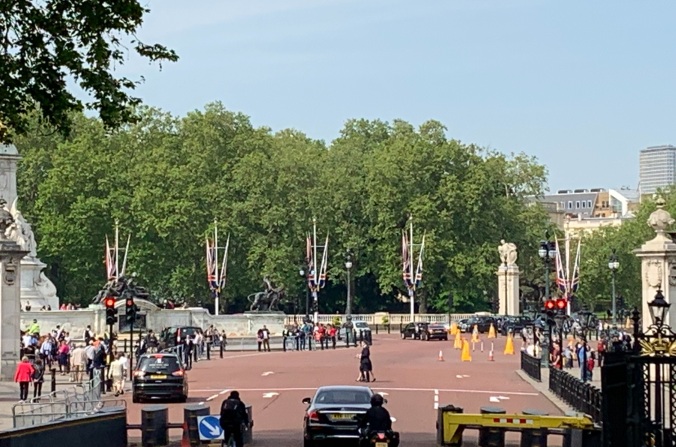 The Queen’s Gallery, open to the public, exhibits works of art from the Royal Collection on a rotating basis. The Royal Collection consists of works owned by the King or Queen “in trust for the nation” rather than privately owned. (en.m.wikipedia.org)

As we approach the Royal Mews, another Original Tour bus passes by in the opposite direction. Yeppers, we are really embracing the tourist experience today… but we are having so much fun. 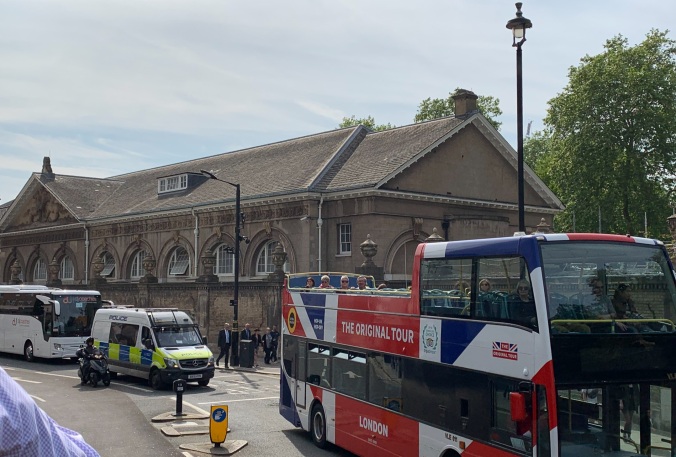 Since the 1820s, the state coaches and other carriages have been kept on the grounds of Buckingham Palace along with the horses and state motor cars. Coachmen, grooms, chauffeurs, and other staff live in flats above the carriage houses and stables. (en.m.wikipedia.org)

The green space below is Grosvenor Gardens, 2 triangular gardens between Buckingham Palace Road and Grosvenor Place.

I wonder which diplomat is parked on the street… 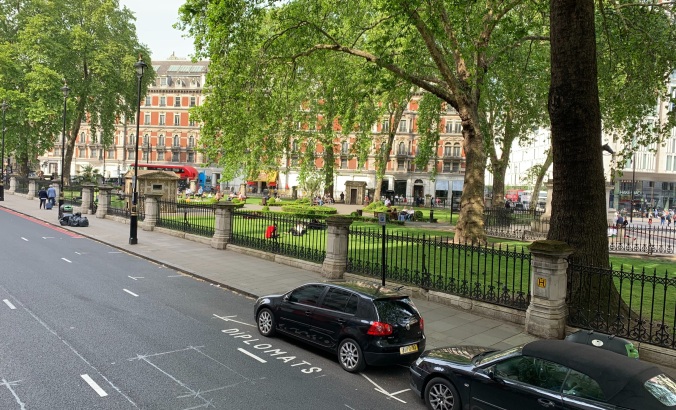 Traffic is backed up today and Westminster Bridge is closed because the Queen is hosting a garden party. Here… 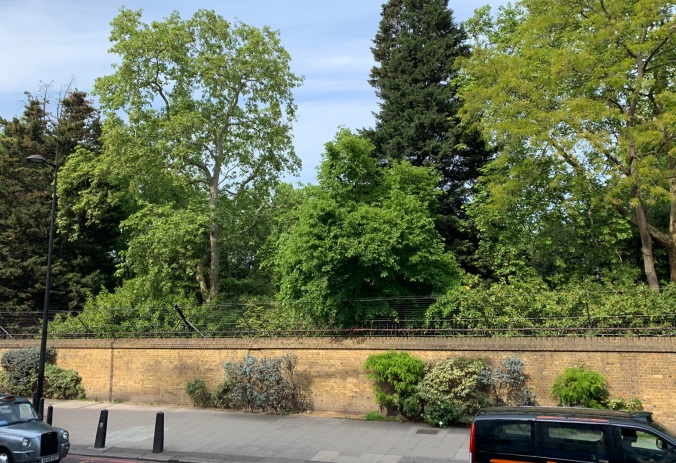 …beyond the trees and shrubs…

…beyond the brick wall and barbed wire… 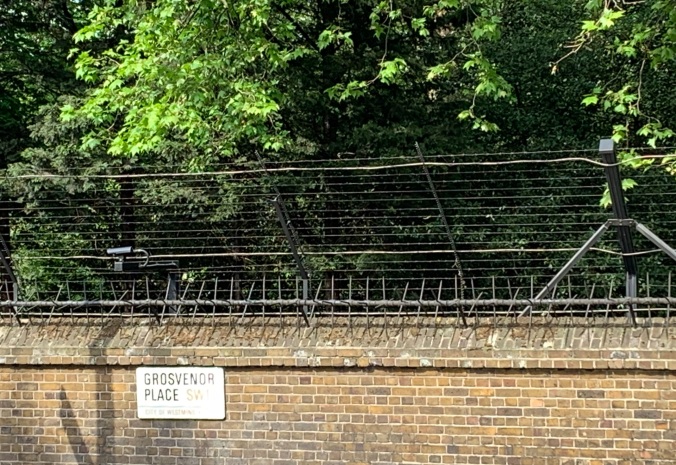 Leaving Buckingham Palace behind, we approach Hyde Park Corner and get a glimpse of  Wellington Arch to the right. 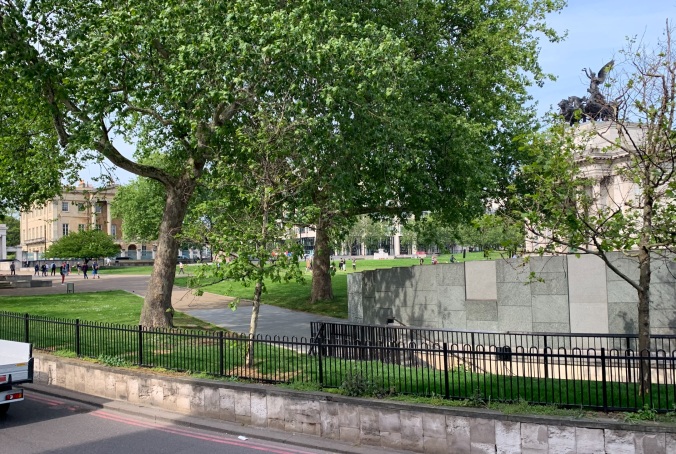 This famous landmark, built in 1825-1827, was originally intended to be the outer entrance to Buckingham Palace. Its original design, however, was never completed because the final cost exceeded the estimate submitted by Decimus Burton, the designer of the arch, and the Treasury refused to allocate more funds to add a crowning sculpture.

In 1846, after a lot of political hoopla, a controversial equestrian statue of the Duke of Wellington was erected on top of the arch for a trial period. (In 1815 Arthur Wellesley, the Duke of Wellington, and the Seventh Coalition triumphed at the Battle of Waterloo to end the Napoleonic Wars. Admiral Nelson, who defeated Napoleon in 1805 at the Battle of Trafalgar, after all, had a  commemorative statue on Trafalgar Square.)

This oversized statue was considered ugly and disproportionate to the rest of the arch. (english-heritage.org.uk)

What do you think?

The government wanted to take the statue down but the Duke of Wellington threatened to resign as commander-in-chief. Because of his immense prestige, the government and Queen backed down.

Matters were resolved in the early 1880s. The arch was disassembled and moved to a new location on Hyde Park Corner when a road was built to relieve increasing traffic congestion. A new and acceptable version of Wellington on horseback by Joseph Boehm was erected in 1888 near the original arch across from Apsley House.

In 1912 the newly assembled arch was crowned with a new sculpture created by Adrian Jones. Entitled, “Peace Descending on the Quadriga of War”, a giant winged female figure holding a laurel wreath descends upon a chariot drawn by 4 rearing horses (hence quadriga) and driven by a young boy apparently unaware of peace hovering behind him. (english-heritage.org.uk)

Hyde Park Screen was designed by Decimus Burton and completed in 1828. The screen with 3 arches and ionic columns was erected as a grand approach to Buckingham Palace and as a Corner entry to Hyde Park. (victorianweb.org) 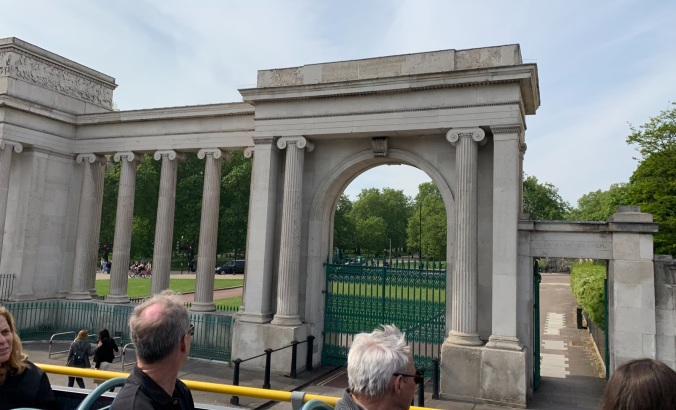 And here’s a picture of how the arch, screen equestrian statue of the Duke of Wellington, and Apsley House stand in relation to each other:

The 18 foot Statue of Achilles honors the soldier and politician Arthur Wellesley 1st Duke of Wellington. It was installed by order of King George III in 1822. (royalparks.org.uk)

Arthur is quite the popular bloke…

Marble Arch is modeled after Rome’s Arch of Constantine, built in the 4th century. John Nash designed the arch in 1827 as a triumphal gateway to Buckingham Palace. In 1851 it was moved to its present site at the northeast corner of Hyde Park. (aviewoncities.com) 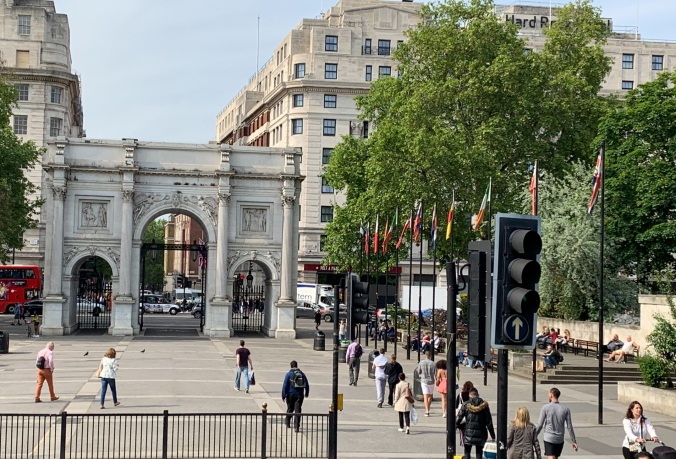 To the east of Hyde Park is one of the world’s most prestigious and expensive hotels. The Dorchester opened its doors in 1931 and, despite being modernized, it still retains its 1930s furnishings and ambience. (en.m.wikipedia.org) 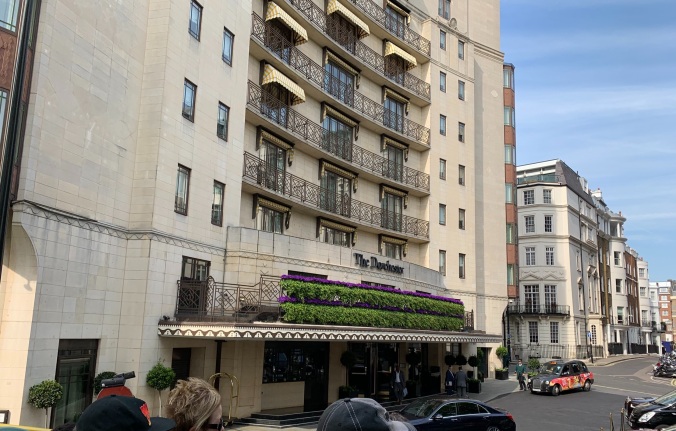 The rich and famous, writers and poets, artists and painters started staying here since it opened, attracted to its luxurious experience.

Queen Elizabeth II attended the Dorchester as a princess on the day prior to the announcement of her engagement to Philip Mountbatten in 1947. Her fiancé held his bachelor party here as well. Elizabeth Taylor and Richard Burton frequently stayed here in the 1960s and 1970s.

In 1985 the Sultan of Brunei purchased the hotel. 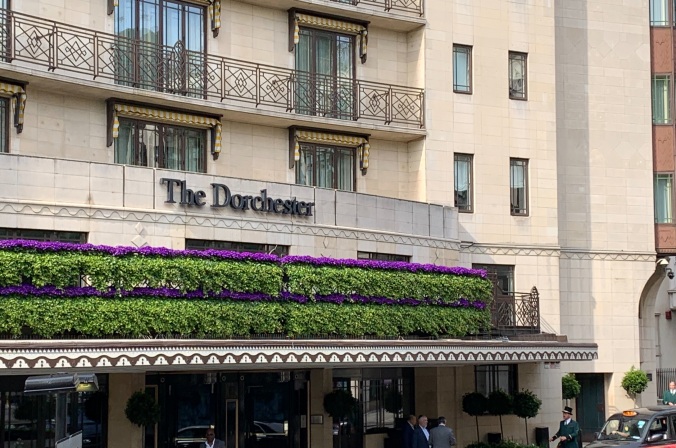 The Brunei Investment Agency owns 9 hotels throughout the world including the Beverly Hills Hotel and Hotel Bel-Air in Los Angeles.

This 40 acre triangle has no lakes, no buildings, no playgrounds, and only a few monuments, unlike its neighboring parks. 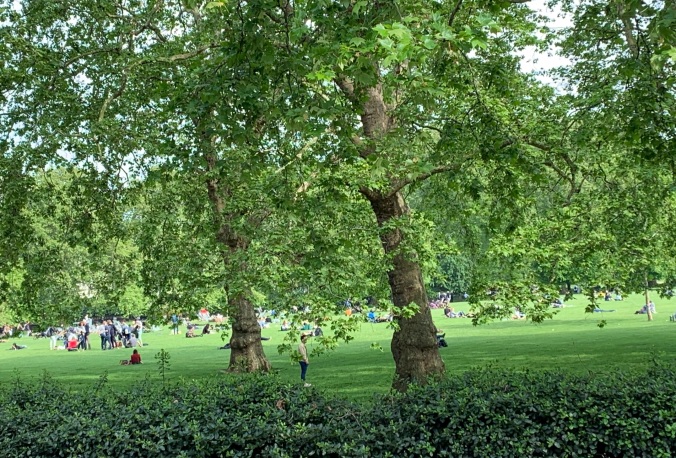 The story goes that, back in the 1600s, King Charles II’s wife, Catherine, caught her husband picking flowers for another woman here. In response, she demanded all flowers be removed from Green Park. The park still has no formal flower beds, however naturalized daffodils bloom each spring. (royalparks.org.uk)

After a few more street views…

…we hop off at Piccadilly Circus.

Whew… This was an exhausting post to research, verify, and summarize! I’m sure you are tired as well and glad this entry is over!

One thought on “Royal Views”