Anyway… We start our journey in Coos Bay, 50 miles north of Port Orford, at Tony’s RV Service and Repair where we have an appointment to check the roof and seals of our RV, replace some indoor lights, and replace the tube for the front window washer fluid.

After dropping off the RV and unhitching the car, we travel southwest of Coos Bay on Cape Arago Highway (Oregon Hwy 540) to Charleston, a quaint fishing village. Jeff wants to see Cape Arago Lighthouse. Unfortunately, we discover that the road to the lighthouse is inaccessible.

The current lighthouse, the newest on the Oregon Coast in terms of service, is actually the 3rd to be built on this site. It’s lamp was lit in 1934. The previous 2, built in 1866 and 1909, succumbed to the effects of harsh weather and erosion.

The property and lighthouse were turned over to the Confederated Tribes of the Coos, Lower Umpqua, and Siuslaw Indians in 2013. (oregoncoastmagazine.com)

Not easily discouraged, we continue south and west on 540 through Sunset Bay State Park. After seeing a sign for Shore Acres State Park, our destination, we drive by a turnoff and catch a quick view of the lighthouse. 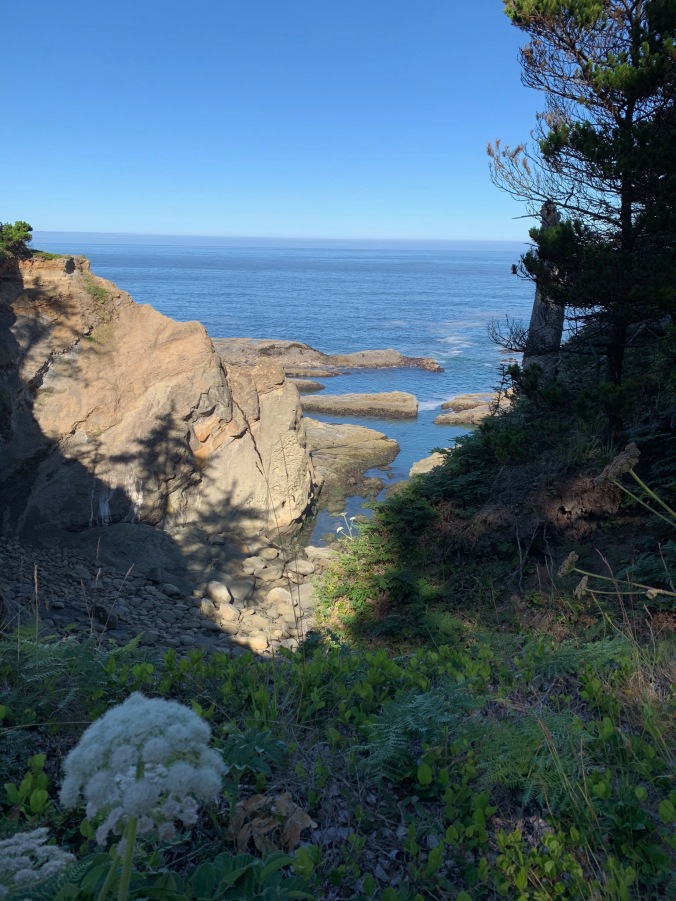 Shore Acres began as the private estate of lumberman and shipbuilder Louis J. Simpson. What started as a summer home became a 3-story mansion, overlooking the ocean, with a heated indoor swimming pool and a large ballroom. The grounds included 5 acres of formal gardens, featuring an oriental garden and a 100-foot lily pond.

In 1921 after fire destroyed the original mansion, Simpson built an even bigger one to replace it. During the Great Depression, however, Simpson suffered severe financial losses and both the house and gardens fell into disrepair.

In 1942 the state of Oregon purchased Shore Acres for use as a public park. The mansion was grazed and an enclosed observation building now occupies its site. All the formal gardens were restored to their original splendor. (park brochure)

Two forces are wearing away these rock formations day by day. The first force is the powerful ocean surf hitting the rocks and exploding into 25-40 foot geysers. The second force is the evaporation of these billions of droplets of seawater deposited on the rocks that cause salt weathering. (plaque inside observation building) 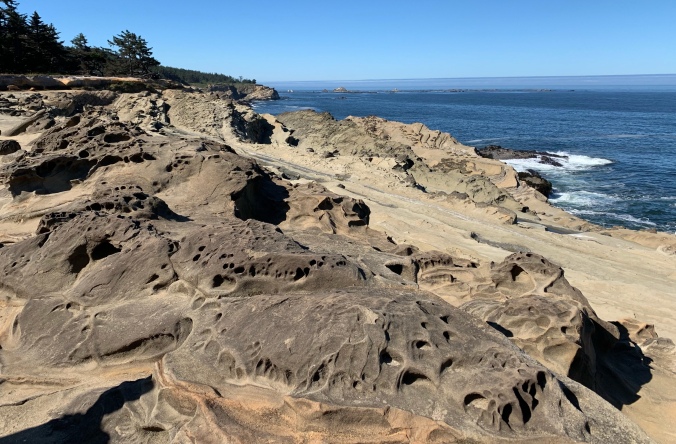 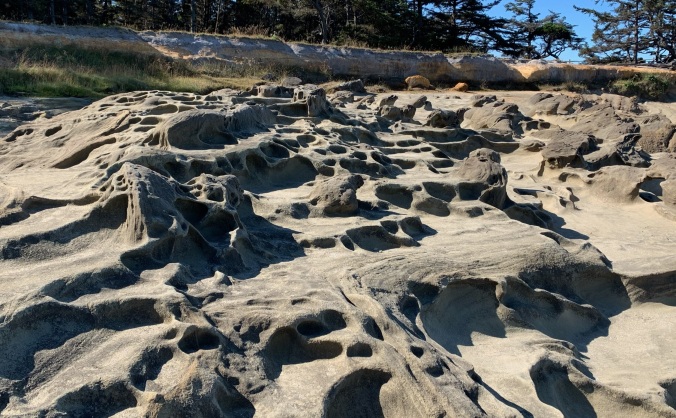 Take a look at this picture of a wave exploding at Shore Acres!

According to oregonsadventurecoast.com, Shore Acres State Park is one of the best stormwatching spots on the coast because of its location on an 80 foot cliff. (The term “stormwatching” has more to do with ocean conditions rather than actual weather conditions.) When conditions in the ocean create large swells, they explode into amazing waves.  A 15-20 foot swell will turn into a wave over 100 feet high, and swells of 25-35 feet create waves as high as 250-300 feet!

What are these clamshell-like protrusions standing at attention? 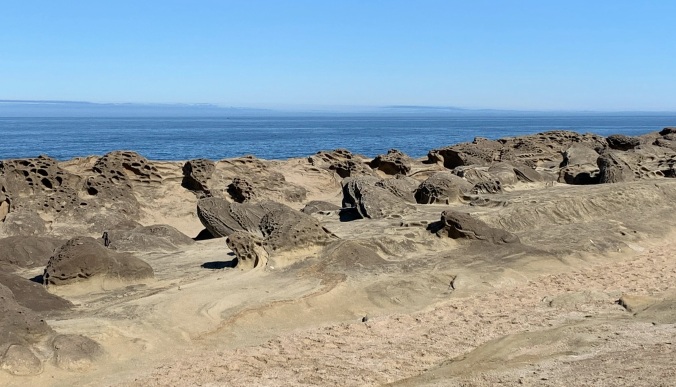 Called concretions, they are compact masses of mineral matter embedded in a host rock. They form before the rest of the sediment hardens into solid rock. The pre-rock cementing material collects around a nucleus of decaying organic material. (plaque in observation building) 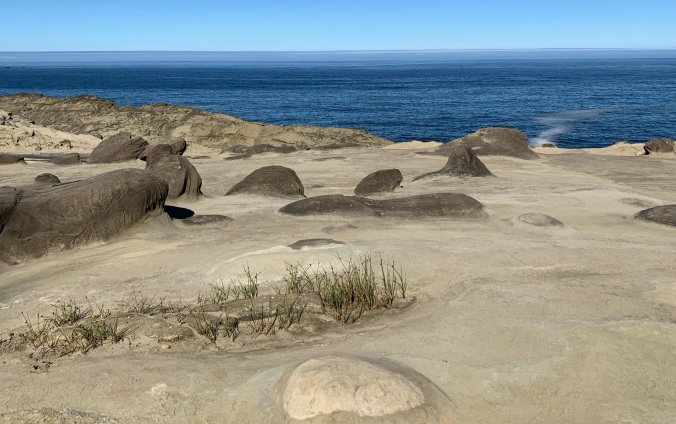 These layers of rock are part of the 45 million year old Coaledo Formation, a geologic formation in Oregon that has preserved fossils dating back to the Paleogene period. (plaque in observation building and en.m.wikipedia.org)

The layers tilt at a 40-45 degree angle from the Juan de Fuca plate colliding with the North American plate. (plaque inside observation building) 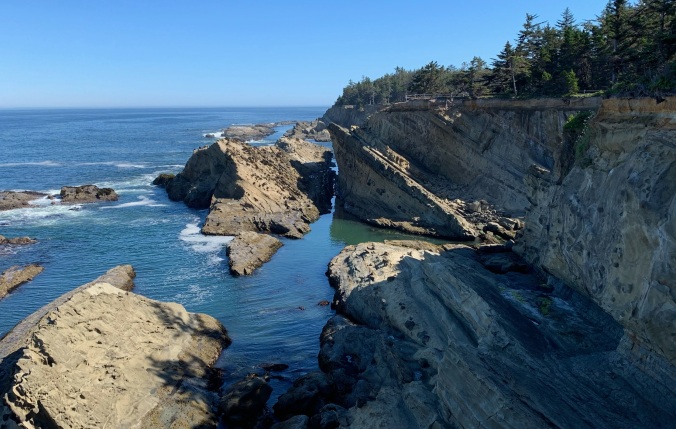 Before we leave the cliffside overlooking the sea and walk over to the gardens, I snap a few shots of wildflowers… 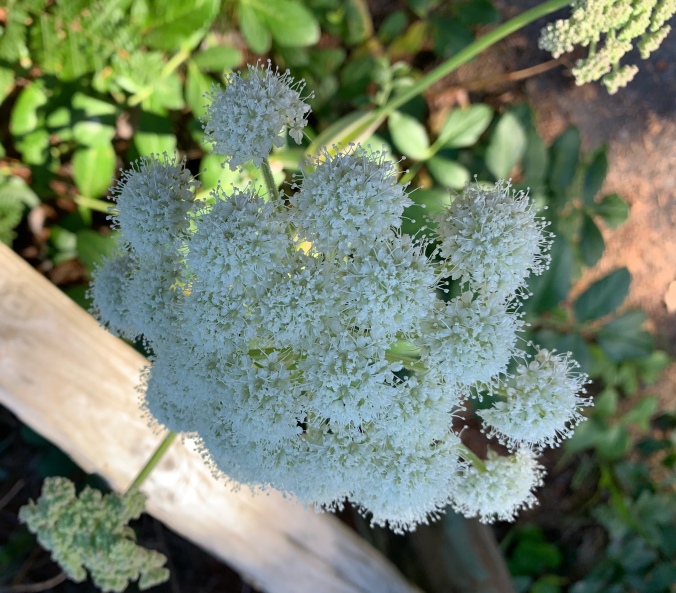 Could these be calla lilies…?

I think these are buffaloberries or bullberries… The single berries look like a small blueberry and are sweet with a bitter tasting skin. 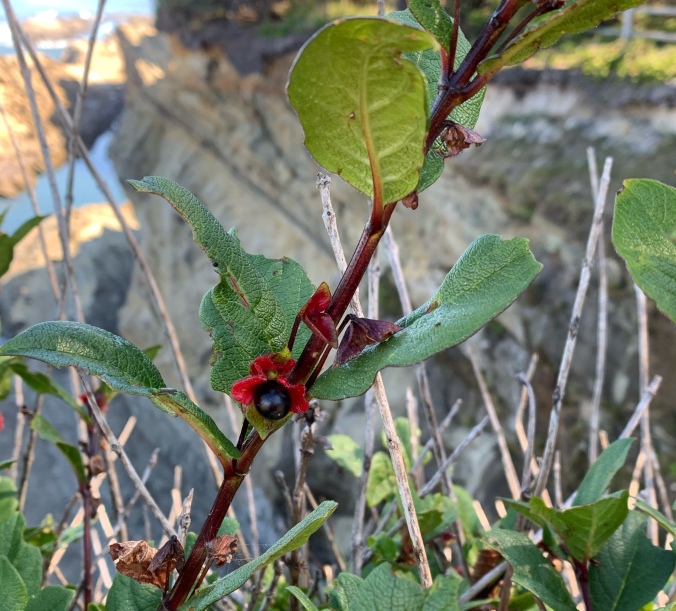 And I take pics of these…

Red-hot pokers and daisies planted near the observation building…

Some of the flowers are labeled in the formal gardens. 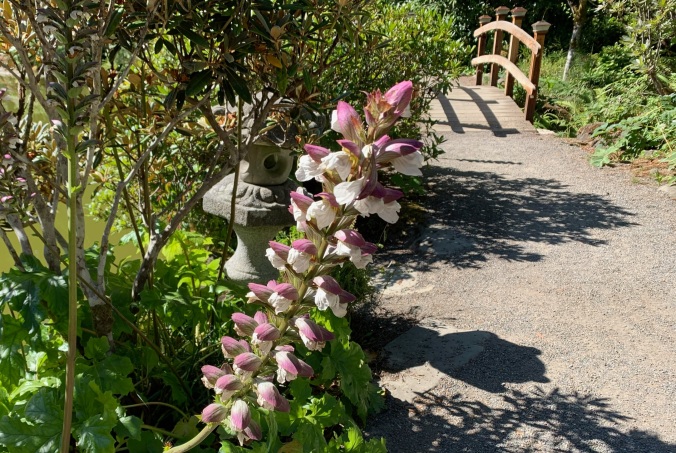 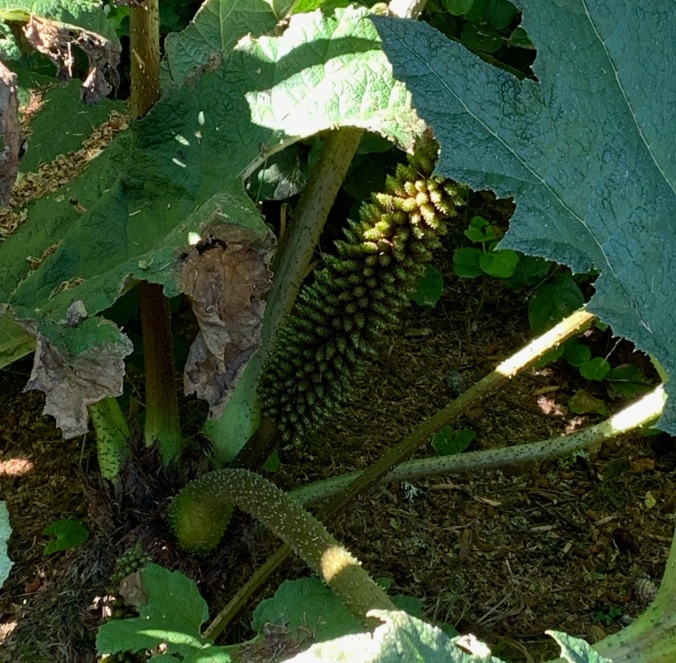 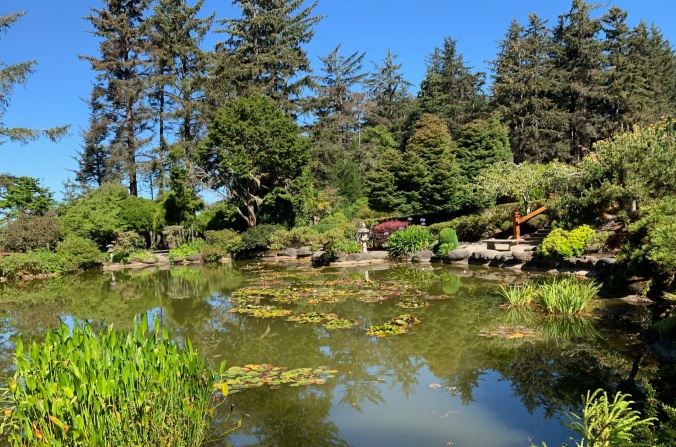 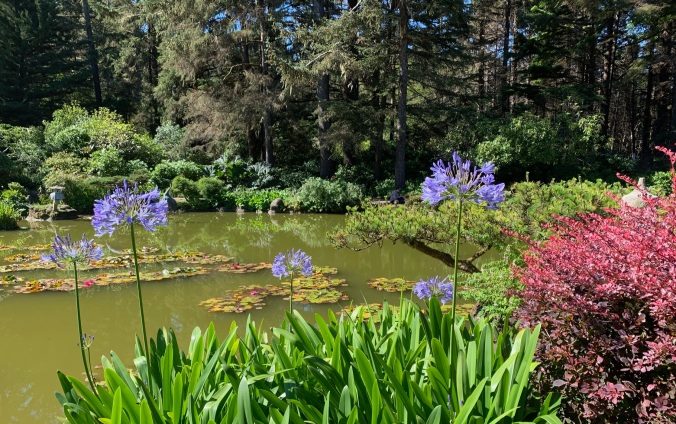 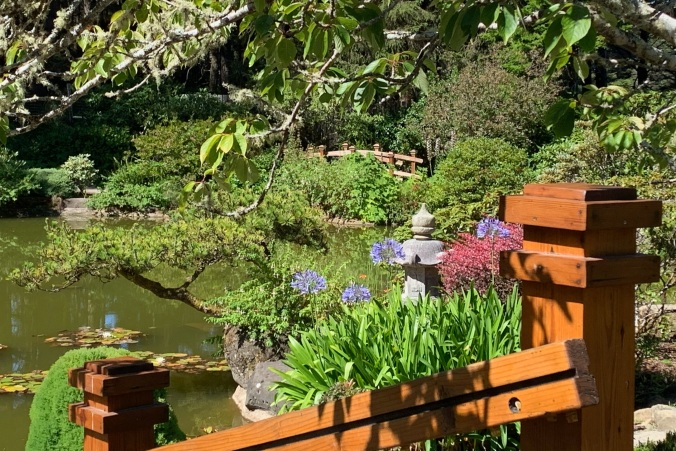 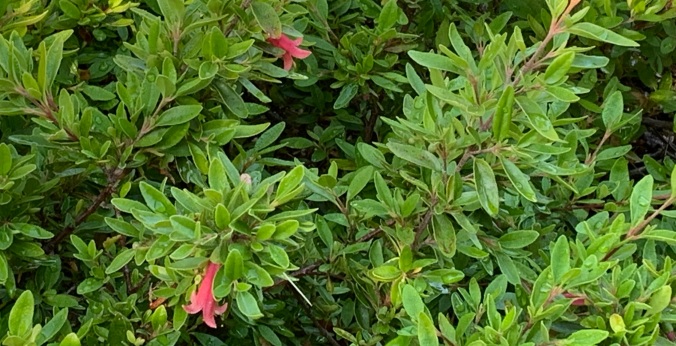 I call these next set of flowers “pretty in pink”… 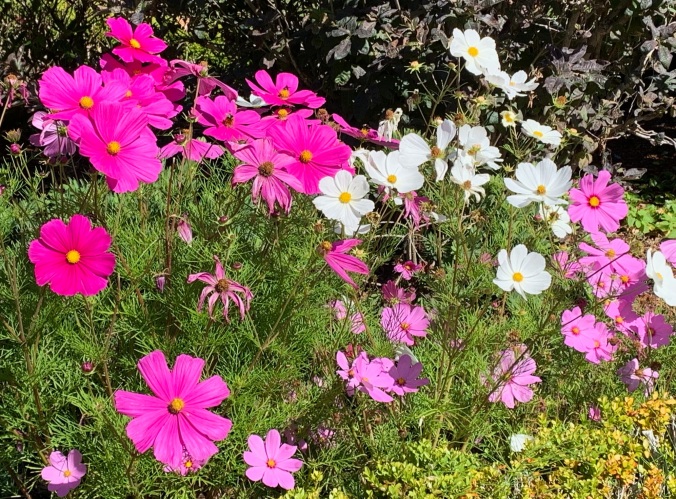 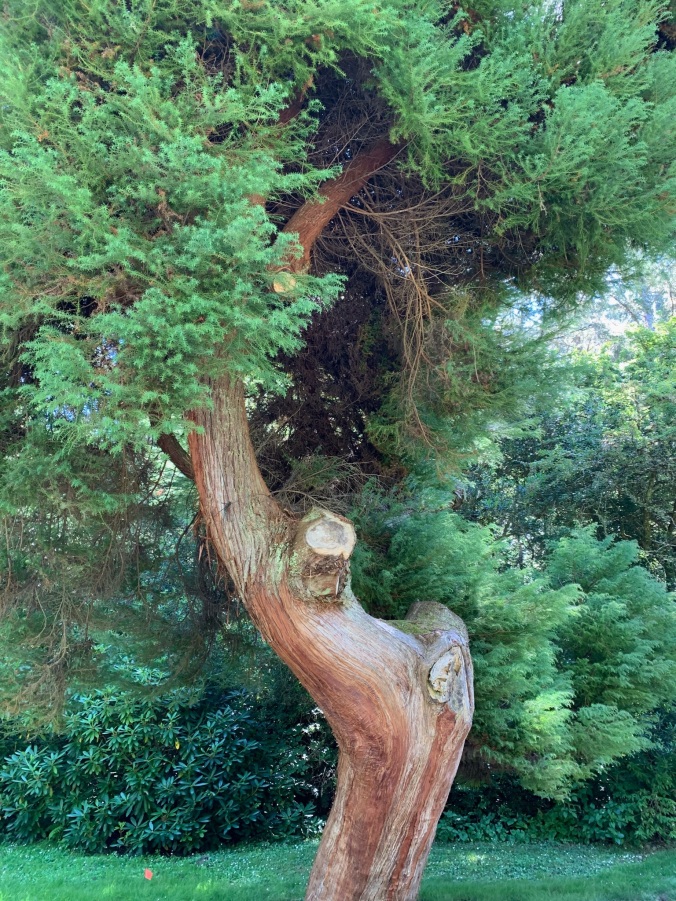 A monkey puzzle tree from Chile… 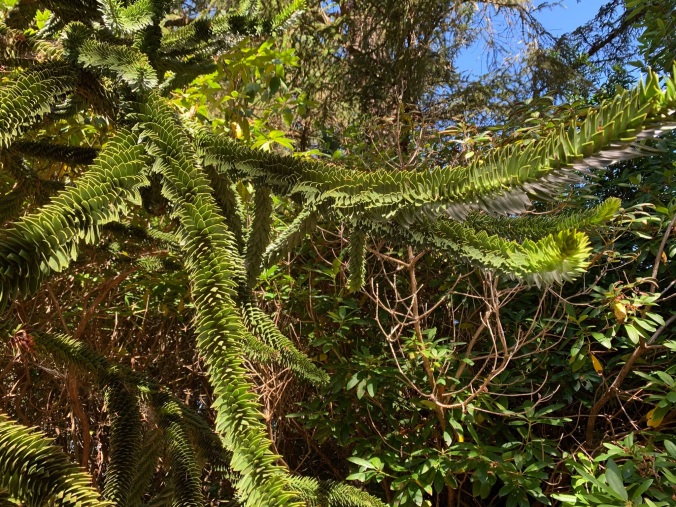 Simpson Beach is a short and scenic hike away from the gardens. 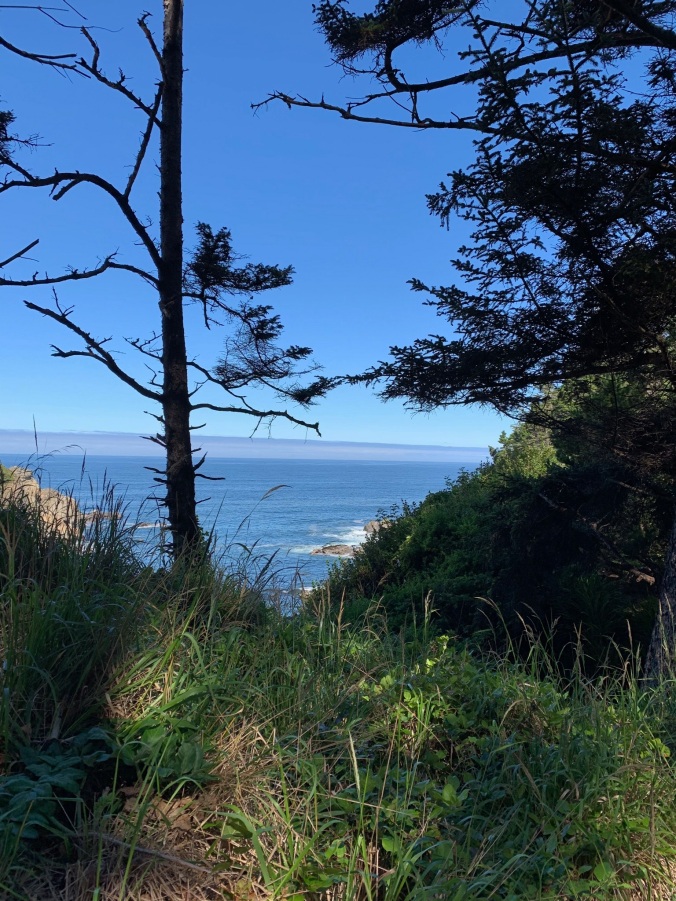 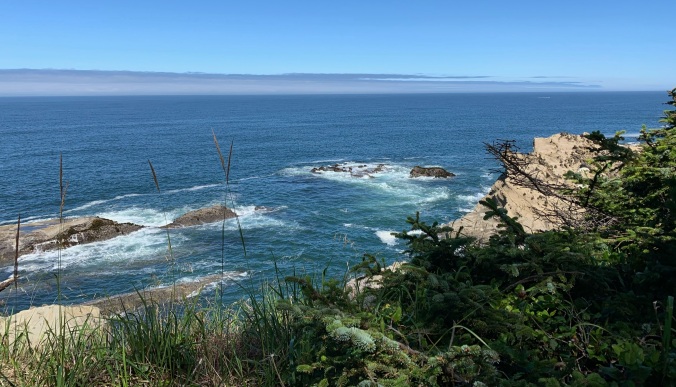 We keep hearing seals barking and are expecting to find them on the beach.

But we are wrong and a little disappointed, so we follow a trail beyond the beach and trust our ears to guide us in the right direction. 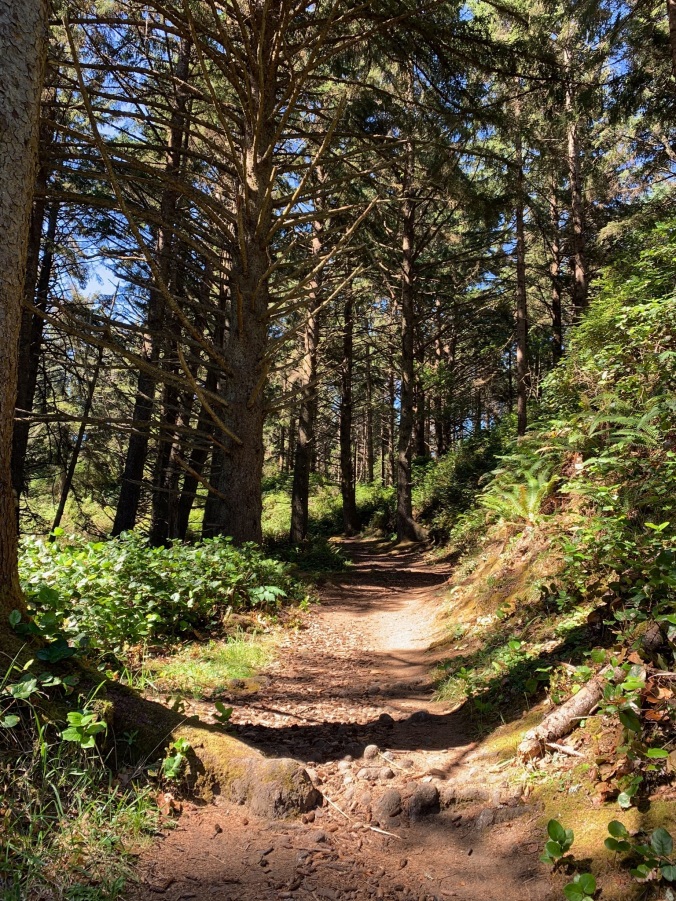 We’re getting closer to the sounds. 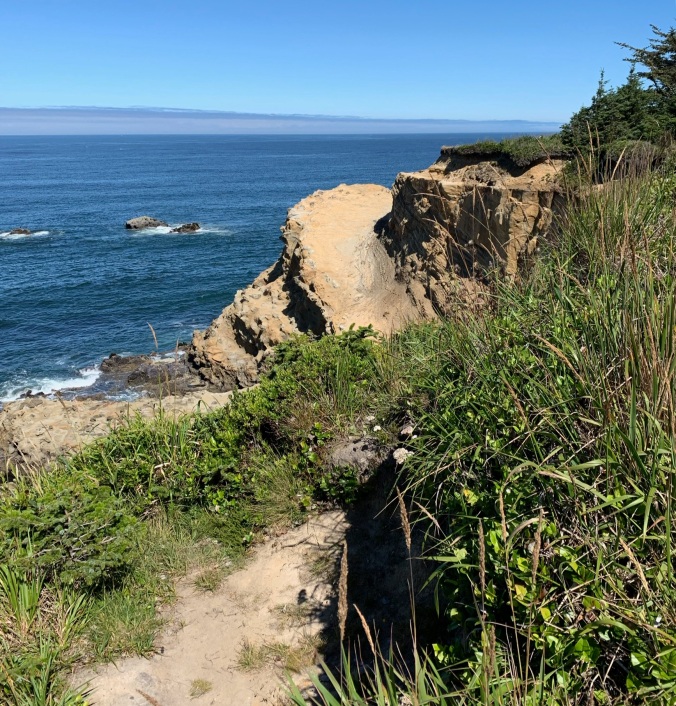 These salt weathered rocks remind me of alligators.

The seals sound like they are frolicking on the line of rocks just below the marine layer. 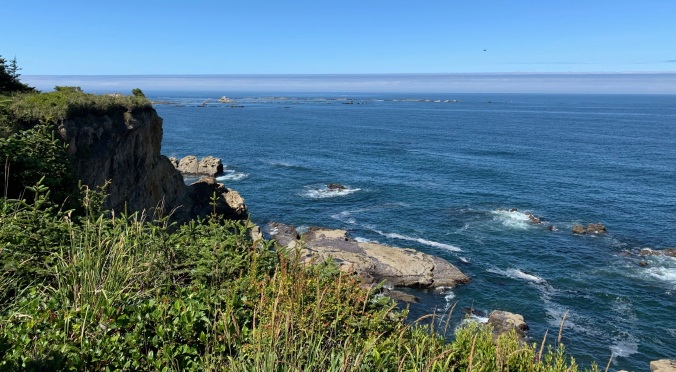 This is as close as we can get before the trail starts looping away from the ocean. Jeff wishes he had brought his binoculars! 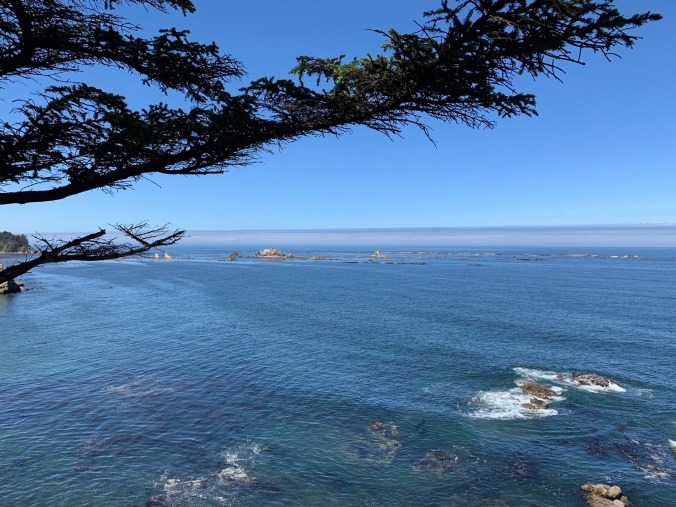 We turn around and retrace our steps back to the beach and to the observation building and along the side of the 80 foot cliff back to our car.

I find 2 very interesting trees. This one looks like a creature from a sci fi movie.

And this one’s roots remind me of one of Paulene and Kenneth’s chickens named Paulene because they both have big feet!