Port Angeles is a premier whale watching destination, so Jeff and I splurge on a whale watching tour with Island Adventures. (I know, even fidgety Jeff commits to spending 4-5 hours on a boat!)

The Strait of Juan de Fuca is home to hundreds of humpback whales who choose these waters as their summer feeding grounds. After facing extinction in the early 1900s, protective measures have helped humpback populations to rebound. Pods of orcas are also known to frequent this area. (Island Adventures brochure)

We arrive early and enjoy the port. 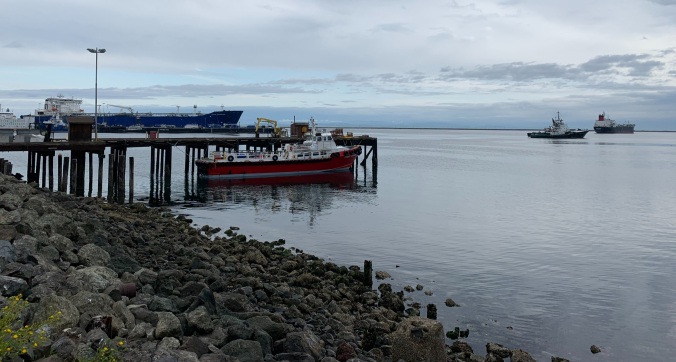 The Island Explorer 4 is our whale watching vessel. It is 85 feet long, 22 feet wide and its cruise speed is 16 knots. Upper and lower viewing decks, flushing toilets, a snack bar serving beer and wine, and indoor heated seating fulfills every passenger’s needs. To ensure a quality experience, the boat is only booked to 2/3 capacity.

Island Adventures is a member of the Pacific Whale Watching Association, a group of nearly 30 whale watching companies throughout Washington and British Columbia that encourage responsible whale watch practices. The PWWA members utilize a combination of hydrophone recordings, shore-based sightings, reports from many types of vessels, an encrypted radio channel, and a private online sightings network to locate whales in the area. (Island Adventures brochure and Wildlife Viewing Guide)

A captain, a galley/deckhand, and a senior deckhand/naturalist work together to provide us with the highest chances of viewing whales in the wild.

As a matter of fact, the Island Adventures Company guarantees whale sightings on every trip. The brochure states (not in fine print)… “If you do not see a whale (orca, minke, gray, or humpback) with us, you can come again for FREE, for life, on any tour until you do.”

We pull away from the dock at Port Angeles at 9:30… 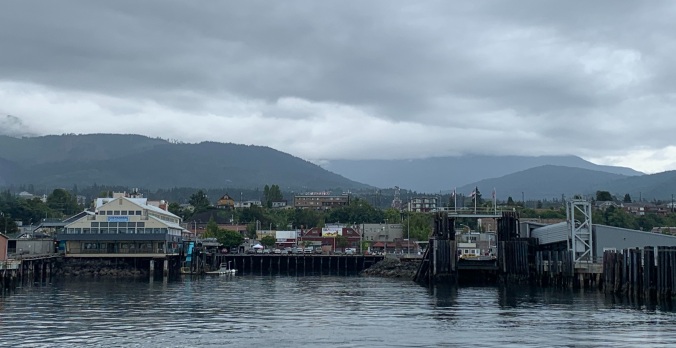 and head into the Salish Sea. Salish Sea? Let me explain.

The Salish Sea is the name for a network of inland coastal waterways in Washington and British Columbia. It begins in the west at the entrance of the Strait of Juan de Fuca and includes the waters between the northern end of the Strait of Georgia in Canada and the southern end of Puget Sound. 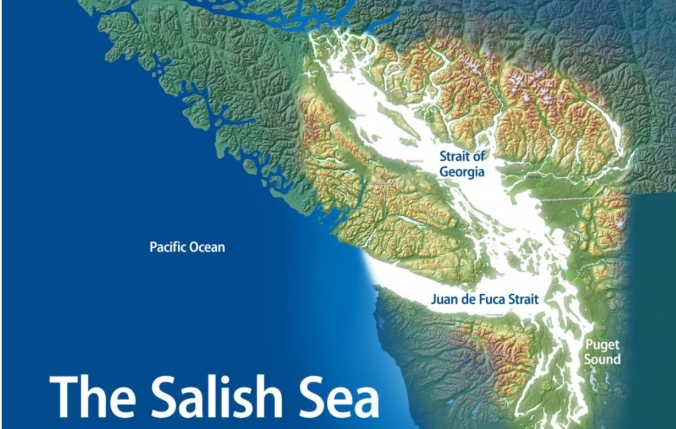 The term “Salish Sea” was first coined 1989 by marine biologist Bert Webber. His goal was to make it easier to protect the region’s many waterways by giving them a single name. Webber chose the name in honor of the Coast Salish peoples. In 2009 the name was officially adopted by both the Canadian and U. S. governments. In total, the Salish Sea covers nearly 7,000 square miles. (Wildlife Viewing Guide)

This Air Station was commissioned on June 1, 1935, becoming the first permanent Coast Guard Air Station on the Pacific Coast. (en.m.wikipedia.org) 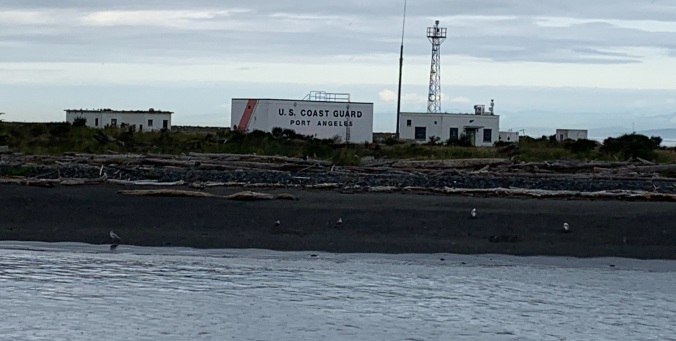 Seals and sea lions relax on the banks but it’s too cloudy to see them through my camera lens. 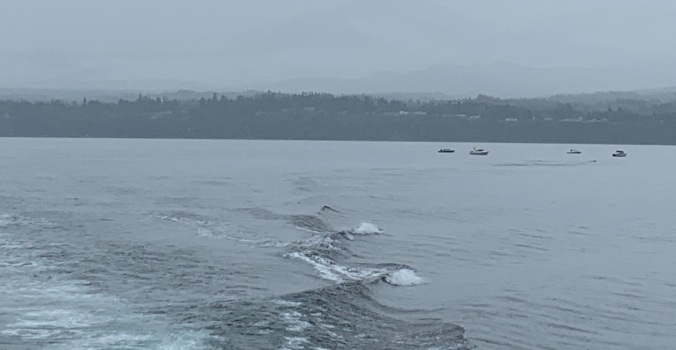 Renee, our onboard Naturalist explains that it’s easier to spot a whale on a cloudy day and that whale watching is really “whale waiting.”

We spot salmon jumping in the water. Renee presents us with a “handy” way to remember the 5 kinds of salmon in the Pacific Northwest:

Chum rhymes with thumb. Sockeye… think of the index finger pointing at you. The middle finger is the tallest so think of King as being the biggest. Silver, also called Coho, is for the ring finger. And Pink is self-explanatory with the pinky finger.

Thar she blows! … A hubbub arises and we spot our first humpback whale at 11:01… 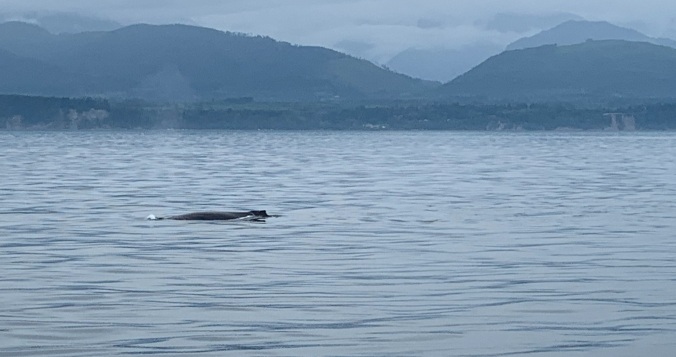 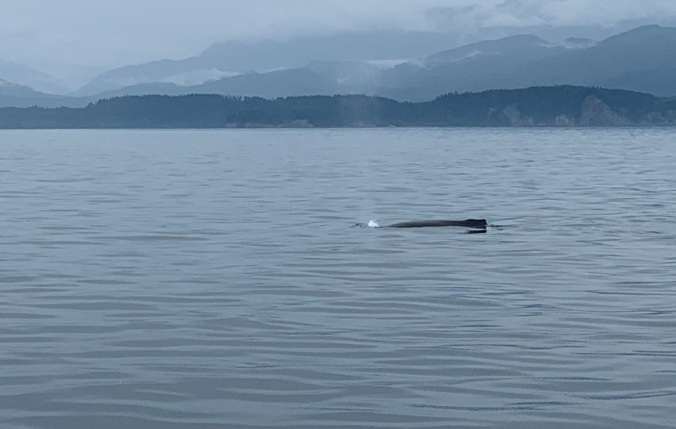 We are so close that we can hear the noise from the spout! 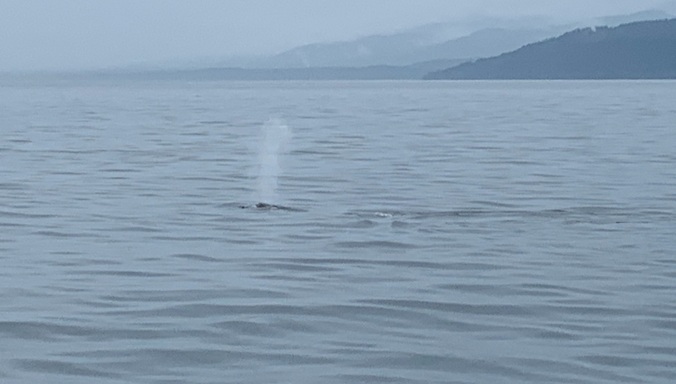 The captain explains that humpbacks can stay submerged for up to 15 minutes before resurfacing again. But the average time is 5-7 minutes.

The whale starts the dive…

And there are the flukes!

A smaller raft of whale watchers shares our excitement.

As we wait for our next whale encounter I escape into the clouds. Is it a dragon or a swan? Whatever it is, it is soon gone. 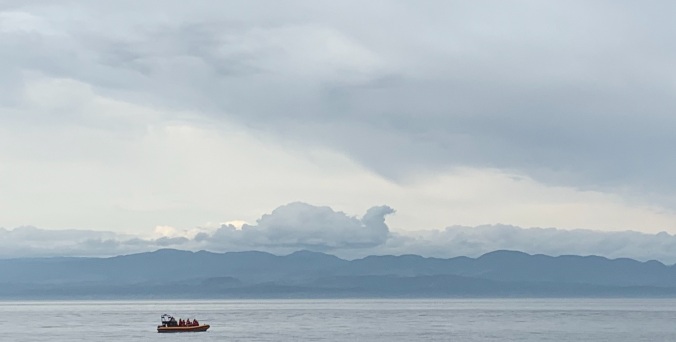 Another humpback visits us.

The picture below shows the whale’s footprint left behind.

Now’s a good time to explain responsible whale watching practices. By slowing down in the presence of whales and maintaining respectful distances, Island Adventures gives its passengers the opportunity to observe these animals without altering their natural behaviors. Local, state, and federal regulations dictate safe distances and approach speeds.

I stop taking pics of every whale we see and start enjoying the experience more. I borrow binoculars for spectacular close-ups.

I walk around the boat and schmooze with our fellow whale fans. I meet a group from Kent, Ohio, the namesake university where I studied for my Masters in Library Information Science.

I meet a traveling photographer, a family from England, a science teacher and her family, a girl who got seasick, and a 14-year-old boy who needed to sleep. 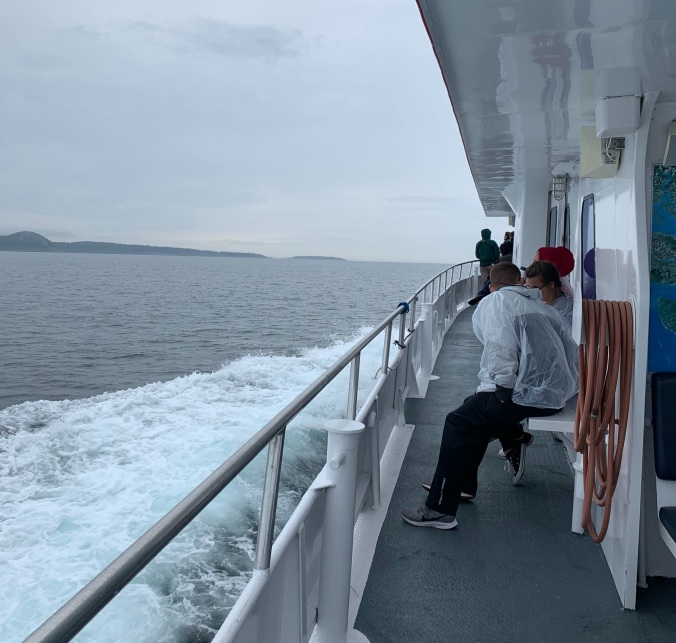 I also meet a man from the local NPR station recording a podcast and interviewing passengers. 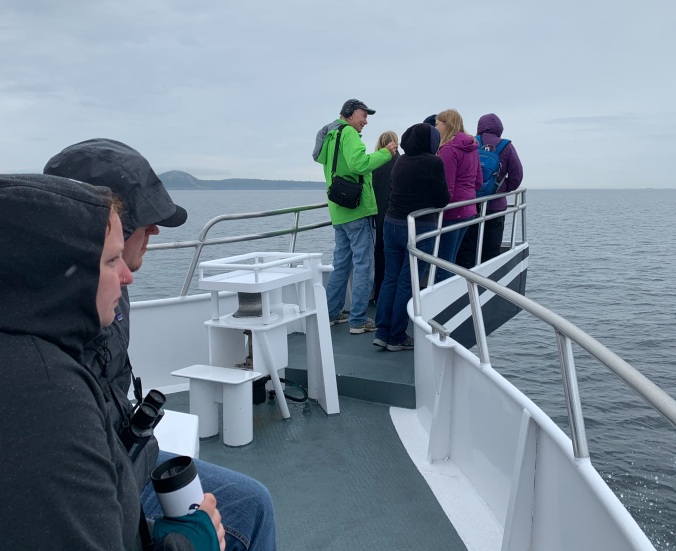 My favorite new acquaintances are 2 women who work together in Olympia, Washington. The whale tour is a 60th birthday gift from the one to the other.

Oh, and since I am wearing my Cape Blanco Lighthouse windbreaker, a man approaches me and asks about Oregon’s most westerly lighthouse with plans to visit someday.

I like this picture. The lighthouse at Race Rock parallels the orca’s dorsal fin.

And there are more…

A half an hour later we approach Race Rocks, a 1.2 square mile collection of protected rocks and reefs a few miles southwest of Victoria, British Columbia.

The reserve is a haulout for hundreds of seals and sea lions and is the breeding ground for northern elephant seals.

The Race Rocks Light was lit on December 26, 1860 and was continuously manned by keepers until it was fully automated in 1997. (Wildlife Viewing Guide) 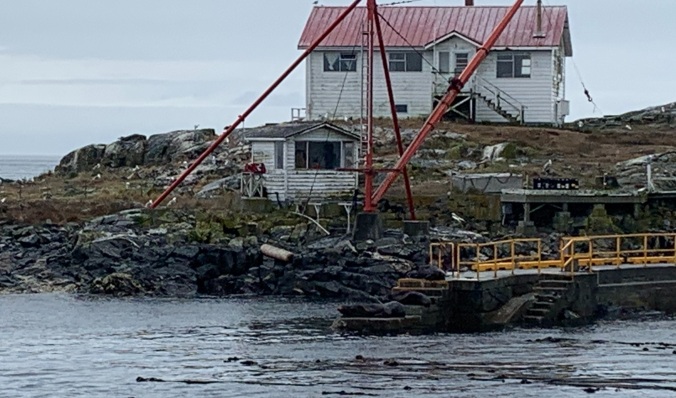 Camouflaged on the steps are northern elephant seals.

It’s been a long, active, and successful morning and afternoon. We head back to Port Angeles with memories, pictures, and new knowledge.