About 40 miles from Thousand Palms Oasis Preserve is a community built to resemble an Old West movie set.

To get there, we take Dillon Road to Highway 62, pass through Morongo Valley, and turn left on Pioneertown Road in the Yucca Valley before reaching the West entrance to Joshua Tree National Park.

We drive past Mane Street and its 1880s Western movie set facades to explore the landscape.

A scattering of Joshua Trees… 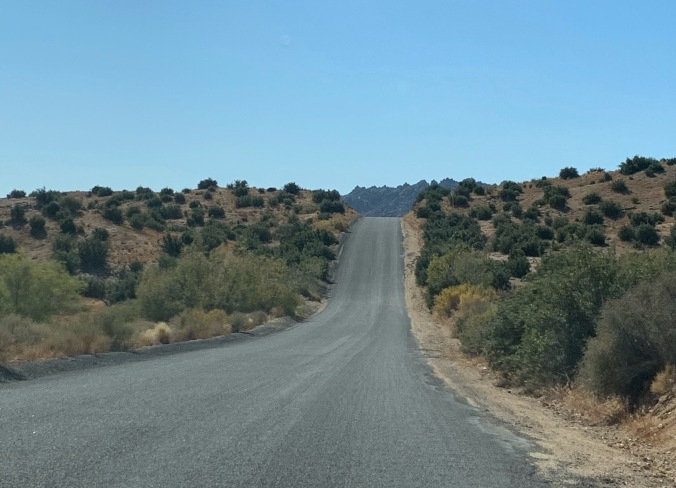 The sun burns off the haze and the sky brightens into a sea of pure blue.

On our way back to Mane Street we park our little car to give our legs a little stretch.

The rocks guard the hills.

A tiny pink flower hangs on from summer.

Piles of rocks look like the remnants of a castle or a once mighty fortress. 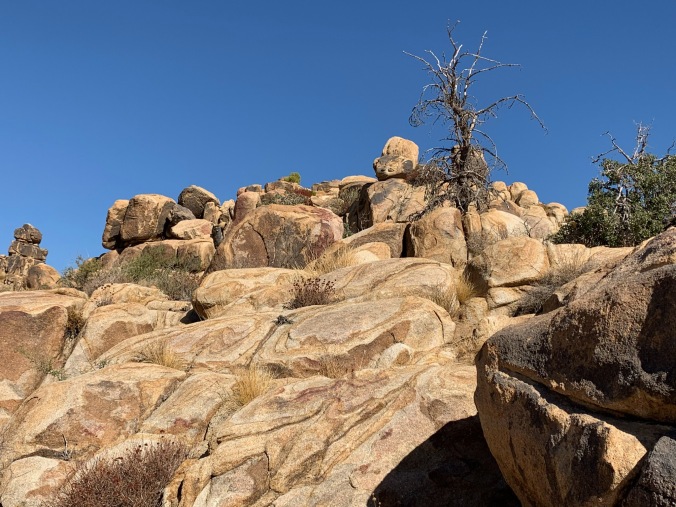 A giant cairn formed by nature… 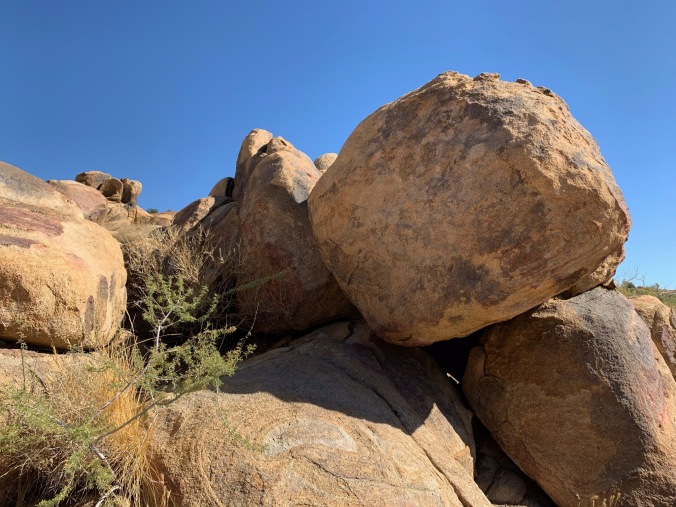 Foliage slips through the cracks. 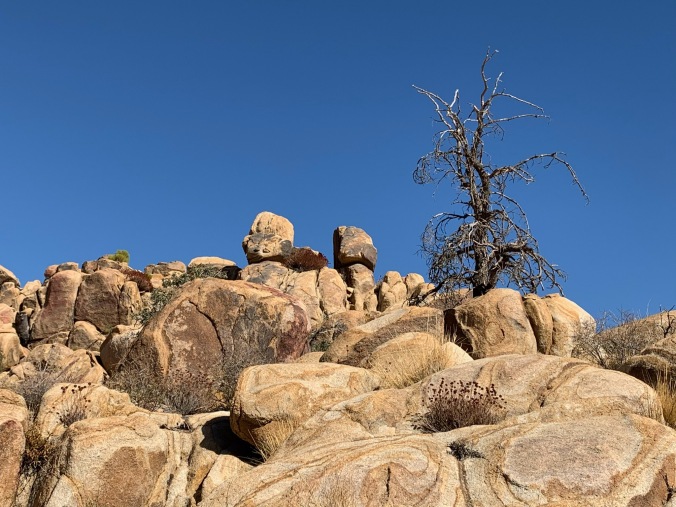 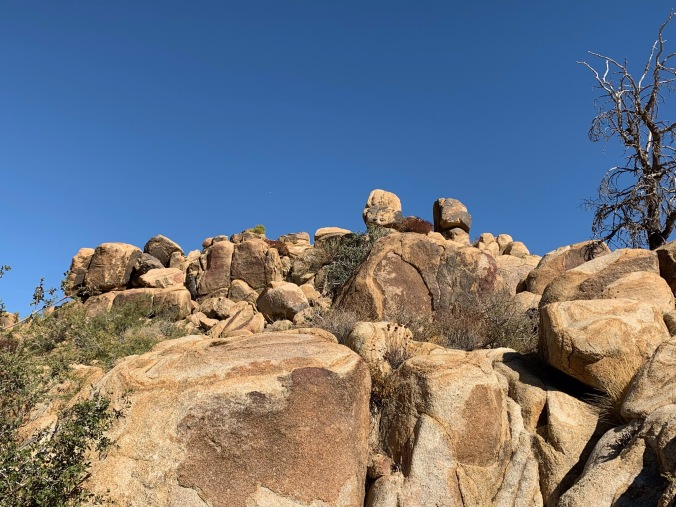 Oh the rocks, the glorious rocks! What stories they tell… 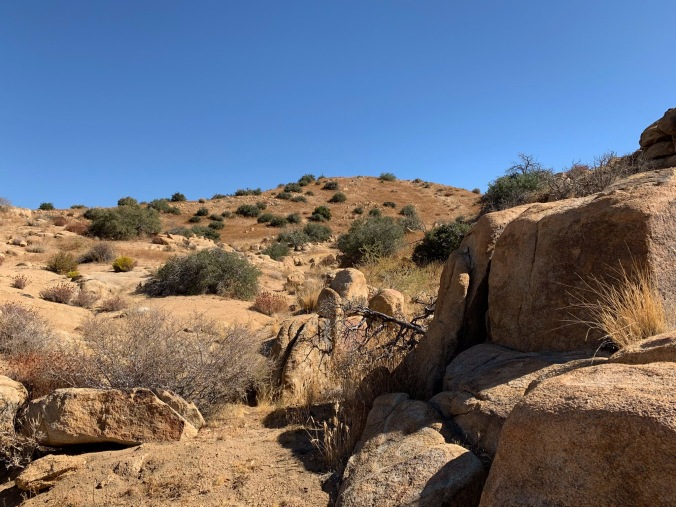 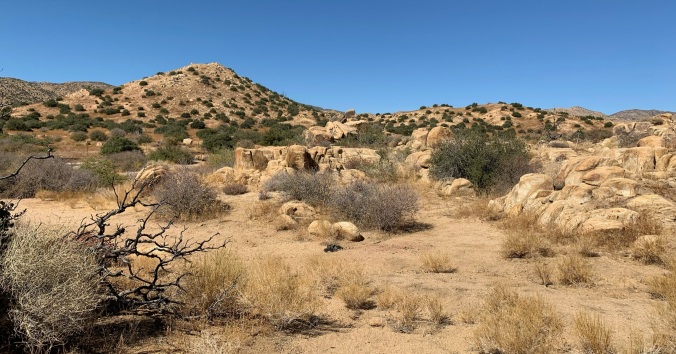 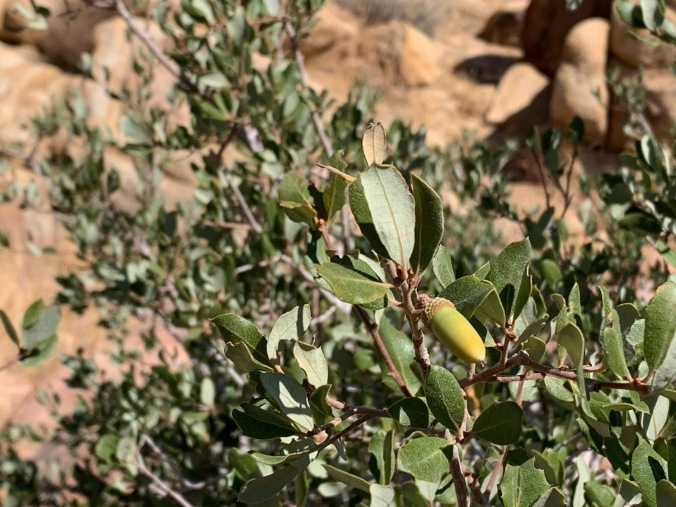 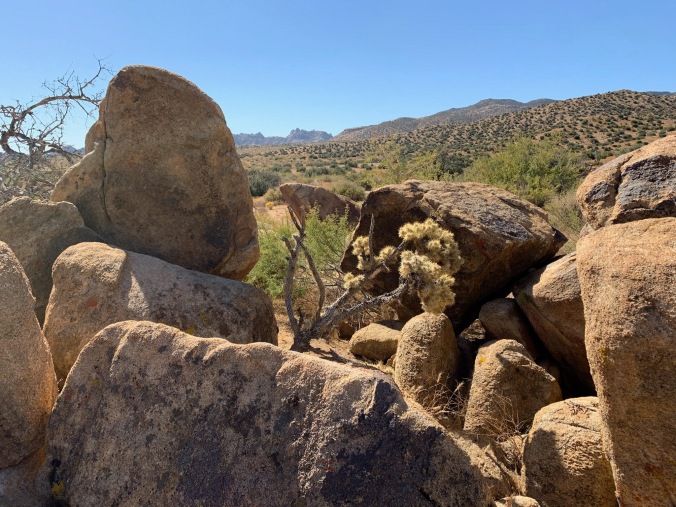 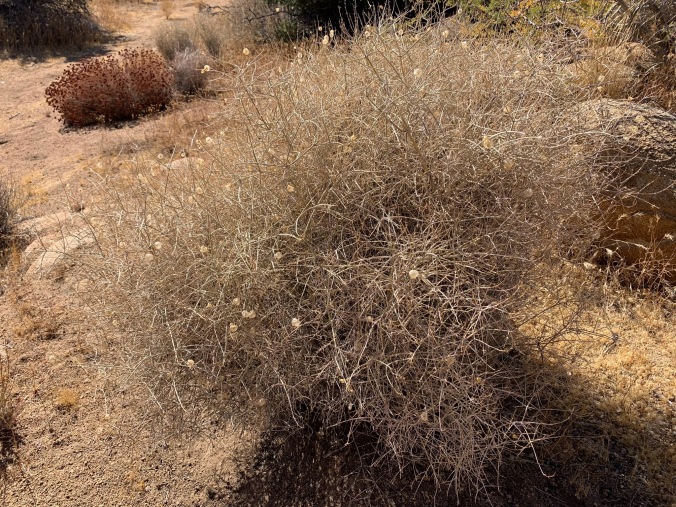 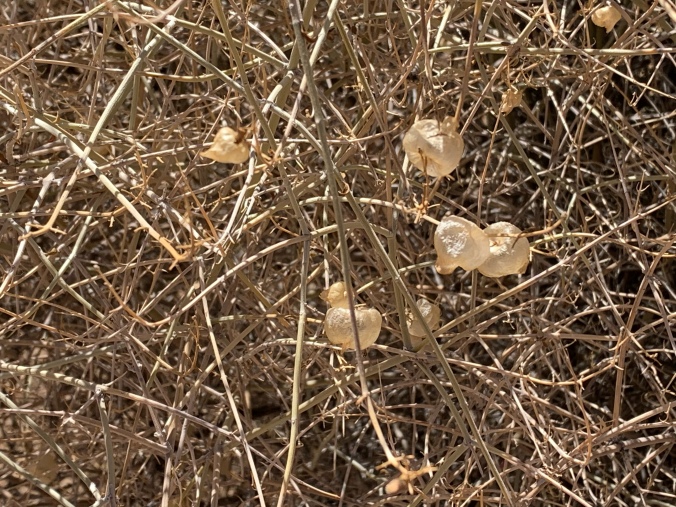 A pop of purple…

A Joshua Tree rests in peace. 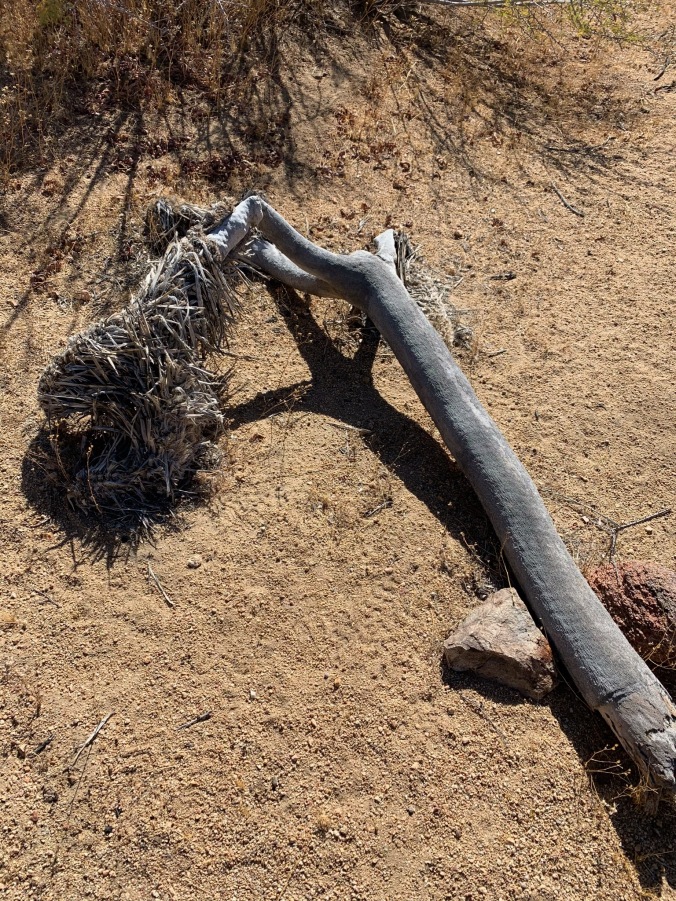 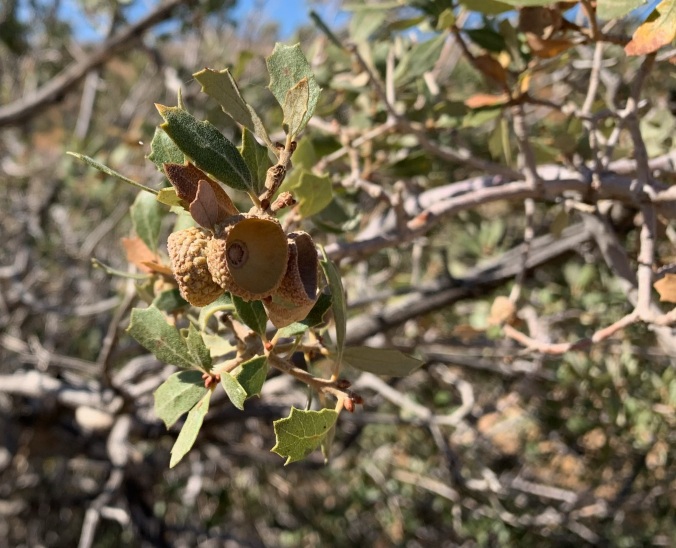 We head back to Mane Street, just over a few city blocks long, where only horse and foot traffic is allowed.

The Story of Pioneertown

He was looking for a place easily accessible from both Los Angeles and Palm Springs that would serve as a filming location, vacation destination, a residence for people working in the entertainment industry, and a permanent home to ranchers and desert lovers.

Shortly after sharing his dream for a living breathing movie set, he and 16 other investors, including Roy Rogers, Dale Evans, Russell “Lucky” Hayden (from the Hopalong Cassidy series), Frank McDonald (television director of many Westerns starring Roy Rogers and Gene Autry), Tommy Carr (actor and film director), Terry Frost (actor in numerous Western films), and Bud Abbott (straight man to Lou Costello) each contributed $500 to form a corporation. As a company, they purchased 32,000 acres of land that became known as Pioneertown in 1946. (visit pioneertown.com)

By 1948, however, the corporation voted to abandon its priority of community expansion in favor of catering to production companies. Dick Curtis resigned as president of the corporation. Immediately both land sales and productions plummeted, until Philip N. Krasne, the producer of the Cisco Kid series happened to travel through Pioneertown. He liked it so much that he signed a 25 year lease to the land.

During the 1940s and 1950s more than 50 films and serials were filmed in Pioneertown and over 200 productions were produced here. The Pioneertown Post Office is said to be the most photographed P.O. in the USA.

However, plans for a 40 acre lake, a golf course, airport, and shopping center were crushed due to the lack of safe drinking water.  Then, as the golden age of western films came to an end, so did the once abundant filming industry.

We “hoof and foot” our way along Mane Street… 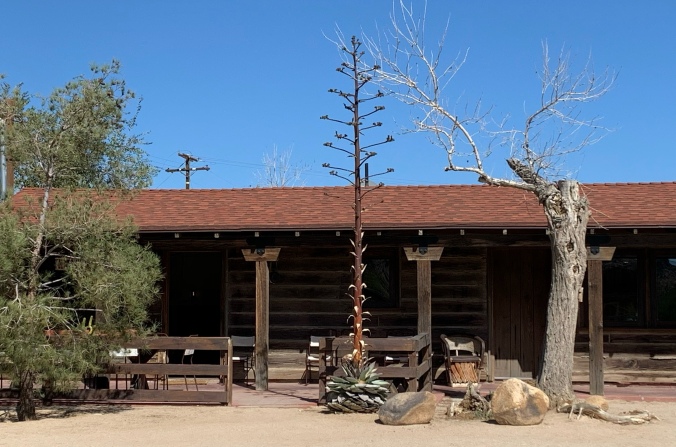 Updated with fire pits, hammocks, and an outdoor cantina, you can still, for $195 a night, “catch a meteor shower, happen upon a sold out show, dance under the stars, or simply pass time around a fire.” (pioneertown-motel.com)

Up close and personal with a Joshua Tree…

Creamy white flower clusters form at the tip of the branches from late February to late April. They dry into clumps of large seed pods, and when dry, the black seeds can be harvested and used to sprout new trees. Joshua trees are pollinated by the yucca moth while laying eggs inside the fertilized flower. (desertplants.org) So, now you know! 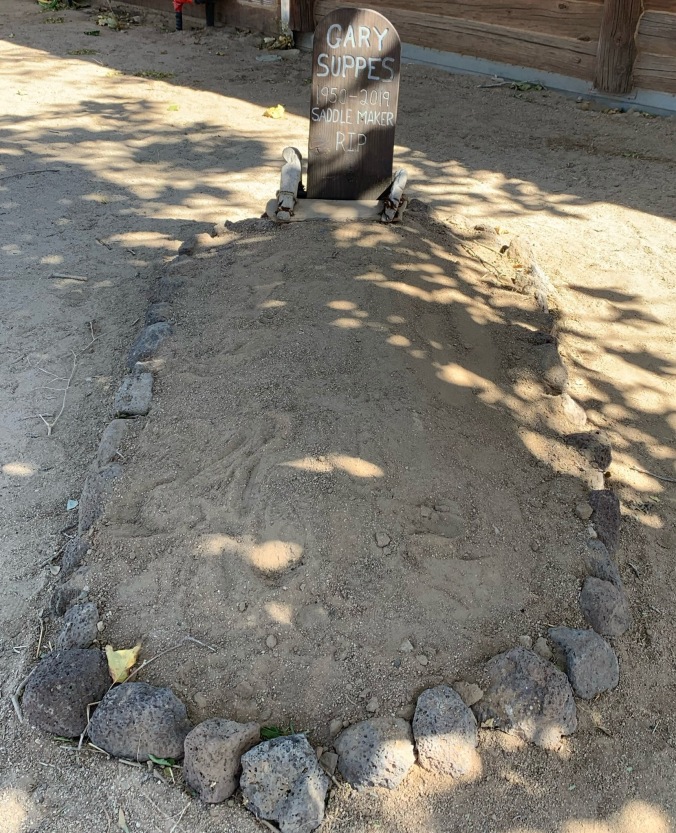 Gary Suppes, a wood worker, designer, and furniture builder, grew up in Pico Rivera, California. In 1981 he moved to Pioneertown where he learned the art of saddlemaking. In 1989 he opened his own business. But the Sawtooth fire in 2007 burned his workshop to the ground. With the help of family and friends he rebuilt his business, Chaparossa Outfitters, on Mane Street in Pioneertown, designing and creating hand-crafted custom saddles and western tack. (pioneertown.wixsite.com) 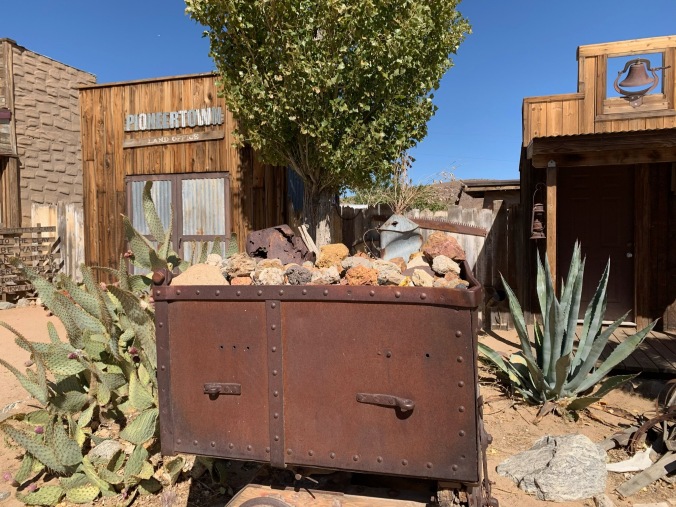 Through the “eyes” of a mesquite… 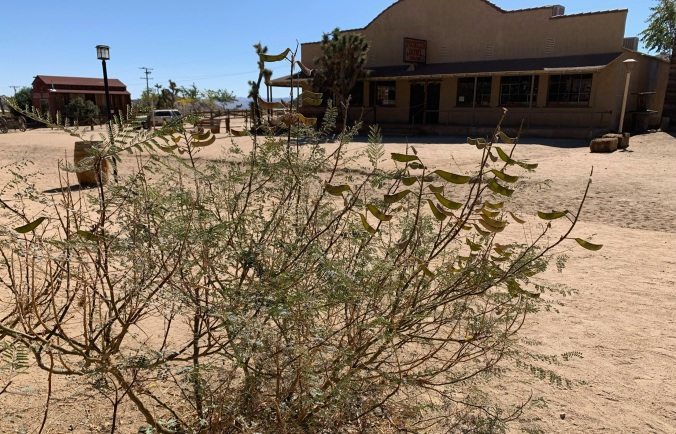 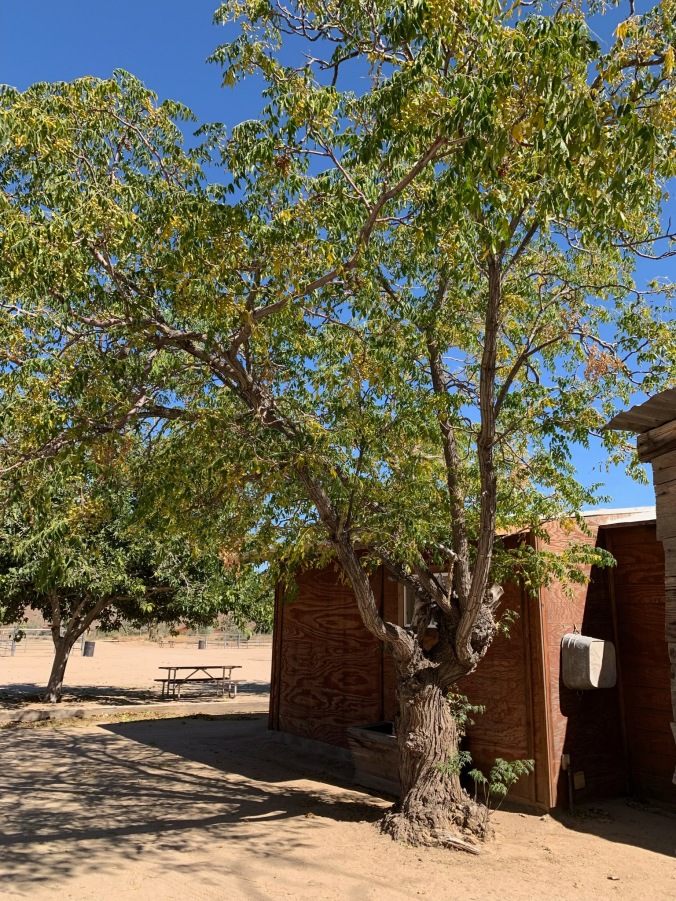 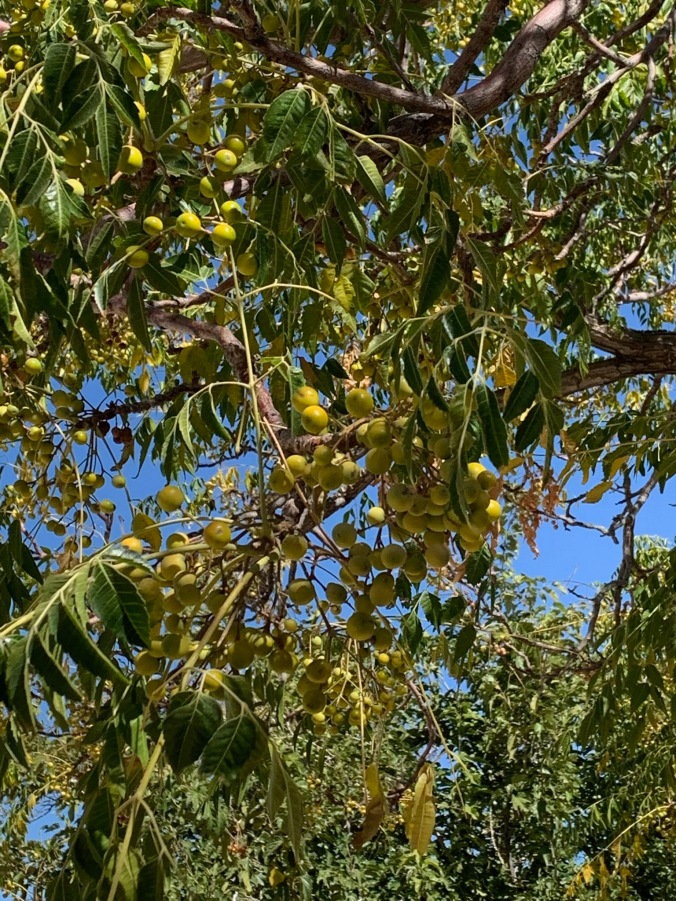 According to gardeningknowhow.com, the chinaberry tree is native to Pakistan, India, Southeast Asia, and Australia. In the 1930s it was introduced to the United States as an ornamental darling of landscapers. Chinaberry trees are prized as shade trees. They grow between 30-50 feet tall and produce light yellow fruit drupes that are toxic to humans when eaten in quantity. Many birds, however, enjoy the intoxicating juicy pulp of the drupe. Because these trees spread easily, they are classified as an invasive tree.

What is now a legendary indie music venue and amazing restaurant, featuring mesquite-grilled concoctions, began as a cantina set for filming Hollywood Westerns well into the 1950s. In 1972 Francis and John Aleba opened the Cantina as a biker burrito bar. 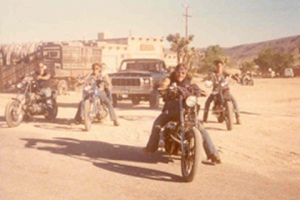 When the Cantina closed in 1982, the Alebas’ daughter, Harriet, and her husband Claude “Pappy” Allen, reopened the burrito bar as Pappy & Harriet’s Pioneertown Palace. 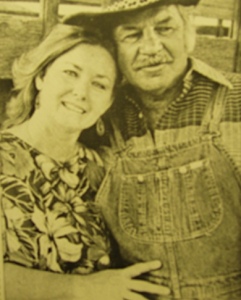 They created a more family-friendly atmosphere that still attracted bikers. With Tex-Mex cuisine and live music featuring Pappy, Harriet, and their granddaughter Kristina, the restaurant became a local gathering place for an eclectic blend of folks. When Pappy died in 1994 family and friends flew in from all over to remember him and celebrate his life. Harriet sold the business to a family friend who gave it up after a few years. Then, in 2003, Robyn Celia and Linda Krantz from New York, fans of Pappy & Harriet’s, purchased the venue hoping to restore it to its days of good food, music, and a place where friends, family, and folks from all walks of life could gather under one roof.

Robyn and Linda have succeeded! Pappy & Harriet’s continues the tradition of live music, great barbecue, and good times in memory of Pappy and all those who came before him. (pappyandharriets.com)

On October 13, 2016 Paul McCartney performed here for an intimate audience of 300 in between his two scheduled appearances for the Coachella Music Fest at the Empire Polo Club in Indio.

We return to our humble abode on Thousand Palms Oasis Preserve leaving behind Pioneertown and its lasting memories in the dust. 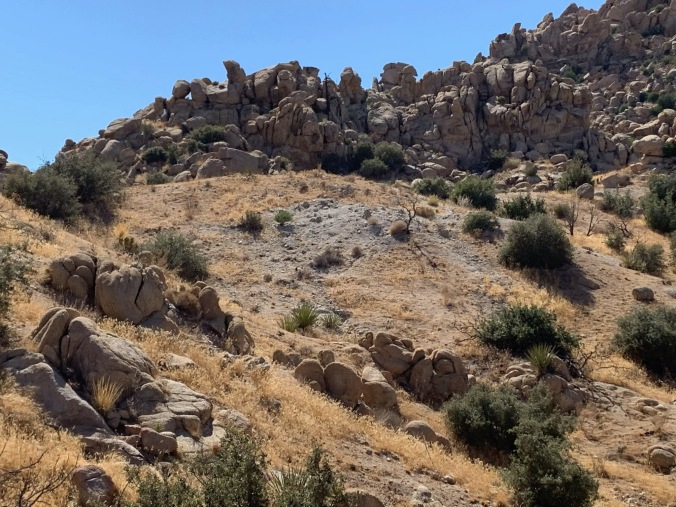 Happy trails to you!