Today a group of artists arrived with box easels and paint tubes for a “paint out” excursion.

I couldn’t wait to see what this meant and looked like!

It meant plein air painting and it looked like this: 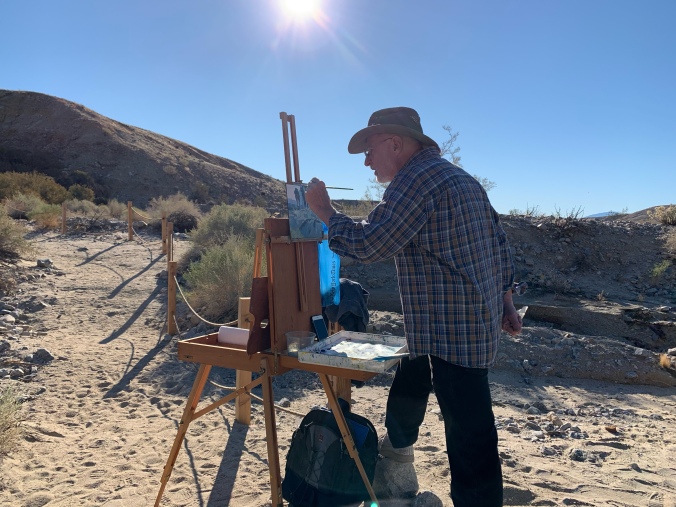 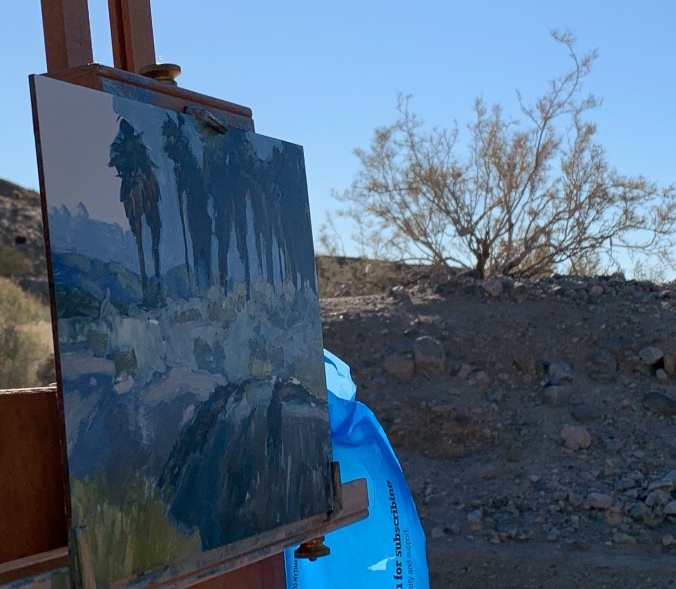 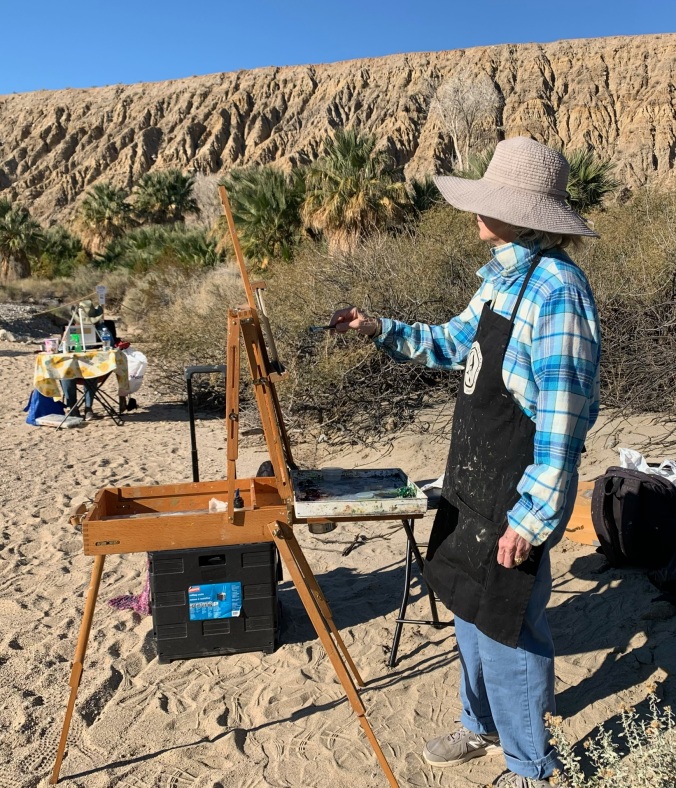 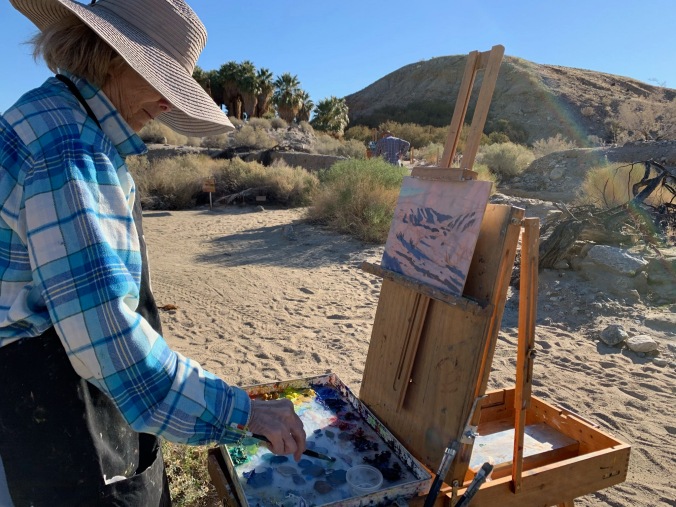 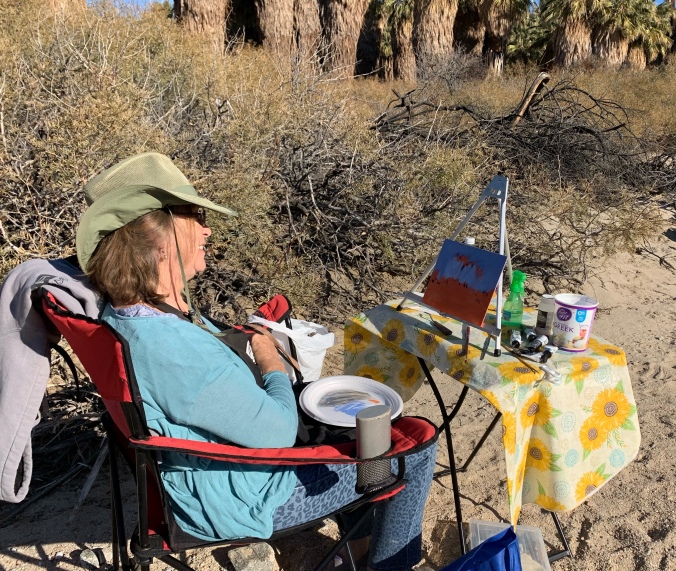 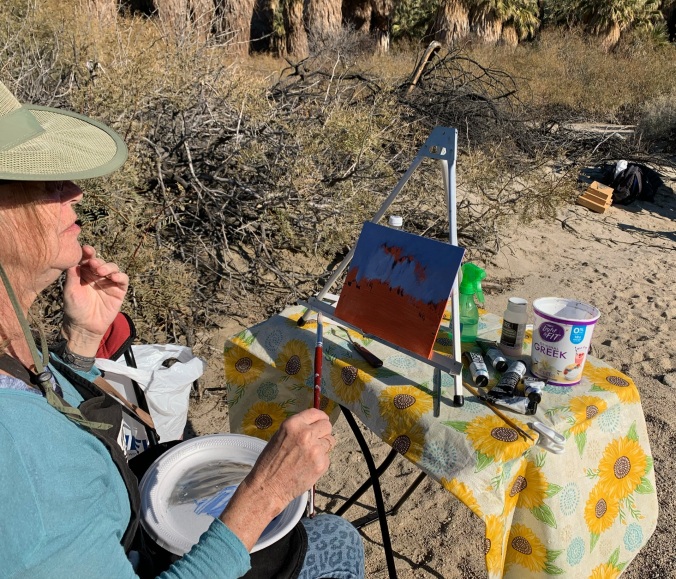 The practice of painting “en plain air” or “in the open air” goes back for centuries but was truly made into an art form by the French Impressionists who were intrigued with capturing outdoor light and its changing ephemeral qualities.

On a clear, sunny day, 3 different sources of light are at work: the sun, the blue sky, and the reflected light from illuminated objects. So, to paint in direct sunlight it is important to understand that the sky and illuminated objects derive their light source entirely from the sun and should, therefore, be painted convincingly subordinate to its brightness.

Painting outside is challenging because of the transient lighting and constantly changing atmospheric environmental conditions. Plein air paintings are prized for their spontaneity and freshness. (artistsnetwork.com) 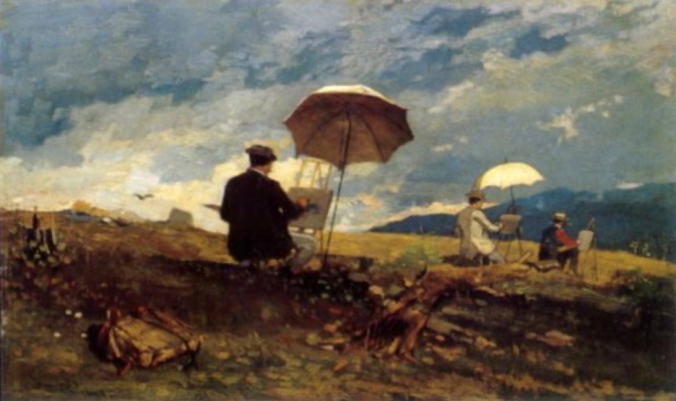 Artists have portrayed the landscape for hundreds of years. Landscape sketches were certainly turned into paintings in the studio, and many believe the artists could not have so accurately represented these scenes without having done some painting outdoors, on location. Leonardo Da Vinci and Rembrandt are thought to have painted outdoors, but this is more a conjecture than fact.

The first documented outdoor painters were Italian artist Agostino Tassi (1578-1644), who taught French artist Claude Lorrain (1600-1682), who is considered by many as the father of outdoor painting.

Agostino Tassi’s Landscape with a Scene of Witchcraft 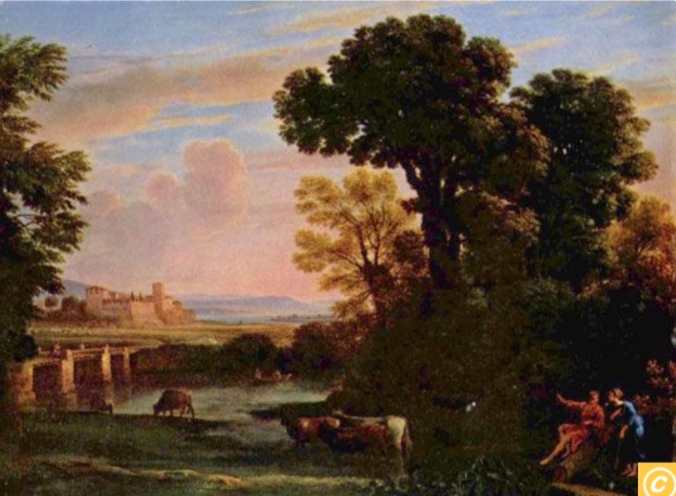 Within the 16th Century the landscape itself became an accepted subject for artists. Pierre-Henri de Valenciennes (1750-1819) in France and John Constable (1776-1837) in England encouraged their students to go outside to draw and paint, working quickly against the changing light and rapidly moving clouds.

Artists known as the Barbizon School painted scenes of the everyday life of farmers in the fields of Barbizon, France from 1830-1870.

British-born Thomas Cole (1801-1848) moved to the United States in 1818. As he became a recognized landscape painter from New York, he founded the Hudson River School of painters, which was not an actual school but a group of artists. After his death, a second generation of the Hudson River School evolved and continued to paint landscapes on location in the open air.

In the early 1860s, 4 art school students in France convened in the countryside together to paint in the open air, but not for the purpose of making sketches, to later be developed into carefully finished works in the studio as was customary during the Barbizon movement. Claude Monet 1840-1926), Pierre-Auguste Renoir (1841-1919), Alfred Sisley (1839-1899), and Frederic Bazille (1841-1870) painted complete works on location. Considered rebels in the art world, these young painters had discovered that by painting in sunlight and making use of the vivid synthetic color pigments that had recently been invented, that they could produce a lighter and brighter style of painting.

At this time in Paris, however, an artist was not accepted or considered important unless his work was juried into an annual show of artworks called the Salon de Paris. Rejected by the Salon, Monet and his friends organized their own month-long show of their paintings.

During this show, Monet displayed his painting entitled Impression—Sunrise. (paintoutside.com) 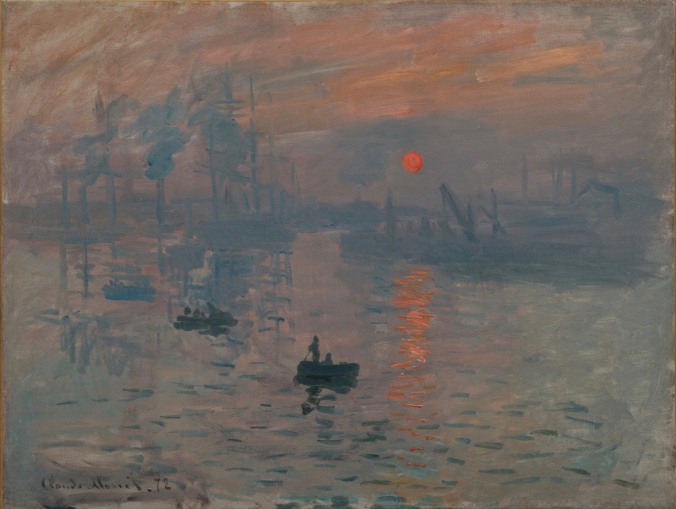 An art critic at that time reviewed this avant-garde exhibit of paintings in a local satirical newspaper of 1874. He derogatorily referred to the works of Monet and his friends as impressionism. As a result of this article mocking the artists, an estimated 3500 people attended the small show to criticize the works as well. But many ended up embracing the paintings, some of which were sold to those in attendance! Thus began the Impressionists’ style of loose, spontaneous brushstrokes that would soon become synonymous with modern life.

Theodore Robinson was the first American artist to visit Giverny, France where Monet built a home and his famous gardens after becoming a successful and wealthy painter. Robinson and Monet became great friends and painted together. After living next door to Monet for 10 years, Robinson returned to the United States where he heavily influenced the American Impressionist movement.

As Impressionism and plein air painting spread across America, art colonies popped up in:

Though the practice of plein air painting has never stopped, it seemed to die down for a few decades until a resurgence began, mostly in California, in the 1980s.

Today tens of thousand of professional and amateur artists have taken up plein air painting across the world. The movement has become a kind of sport called “the new golf.” (paintoutside.com)