We survive the night without blankets and a lampshade. Shady characters come and go, more cigarette butts accumulate outside the room 2 doors down, and we discover the lock to our room is loosely attached to the door frame. But, we’ve got leftover Via 313 pizza squares in our mini freezer-fridge! 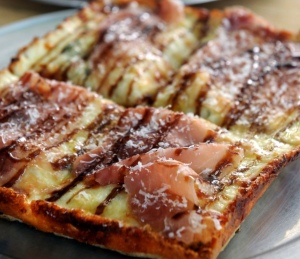 Our day begins at the Omlettry on Airport Blvd., an old-fashioned place that’s often equated with the old Austin where gingerbread pancakes, huevos rancheros, and hot coffee is served 7am-5pm daily. Kenny, the owner, insists on serving real food with natural ingredients. Everything is cooked to order and everything stays on the menu. (theomelettry.com) 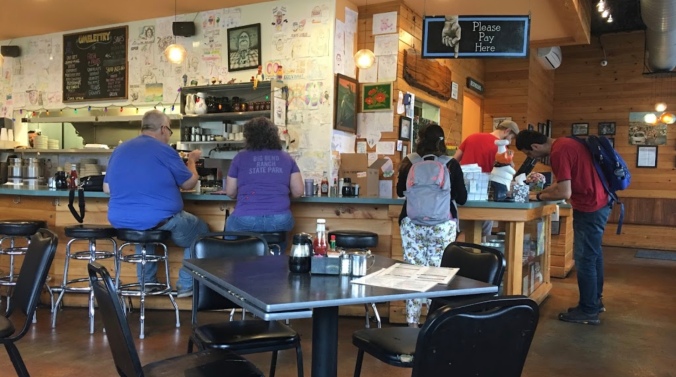 After picking up Hugo, we head to Zilker Park… 350 acres of hiking, biking, field sports, and scenic views. The Great Lawn is home to the Austin City Limits Music Festival, held annually since 2005 on 2 weekends in October.

We take a pleasant walk along part of the Ann and Roy Butler Hike and Bike Trail.

Here are some highlights of our 3 mile out-and-back hike along Barton Creek and the section of the Colorado River known as Lady Bird Lake: 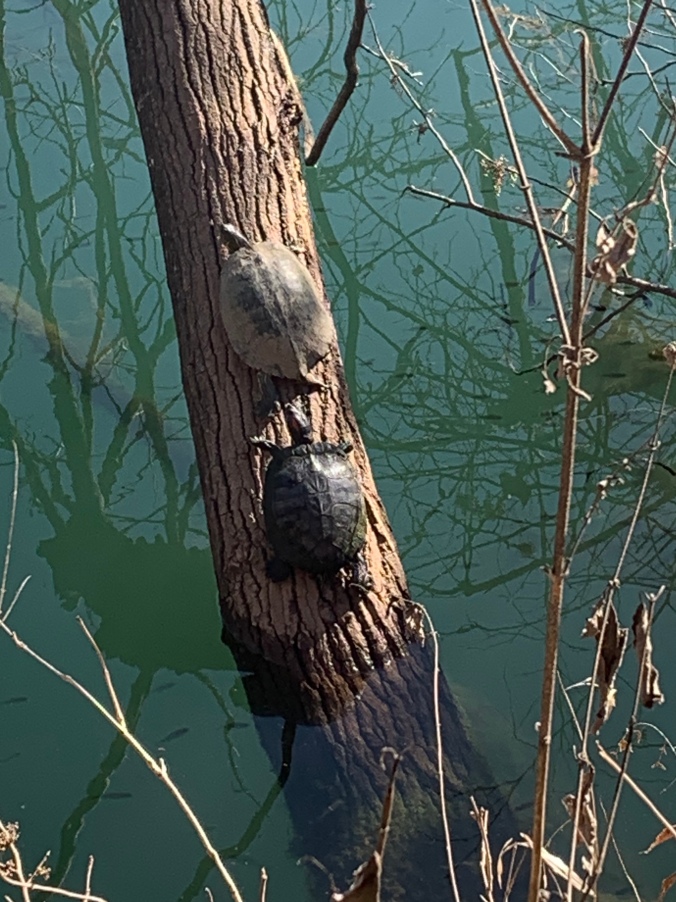 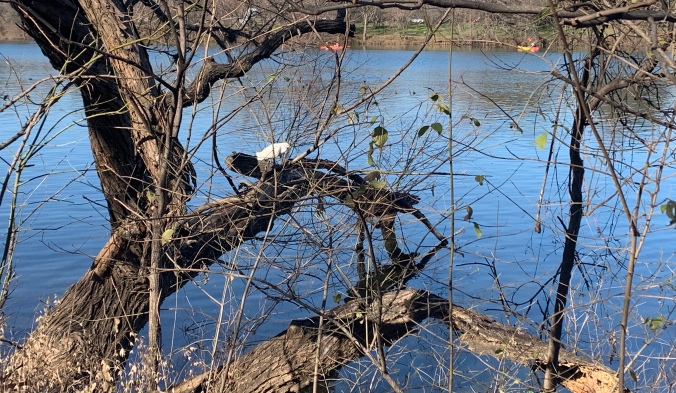 Heading to the Lamar Pedestrian Bridge along Lady Bird Lake… 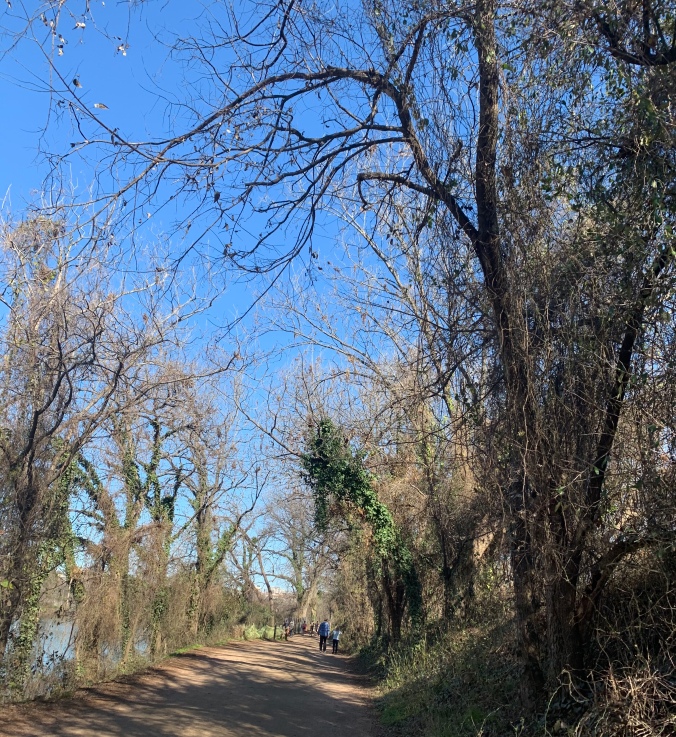 The Pfluger Bridge, aka Lamar Pedestrian Bridge… Or as John named it for me, the “Hugh Jass Bridge”. Say that out loud.

The City of Austin Power Plant…

This building is the former Seaholm Power Plant commissioned in 1948 to meet the growing need for electricity in Austin. Originally called Power Plant No. 2, in 1960 it was renamed posthumously for Walter C. Seaholm, a prominent administrative figure of the city’s municipal facilities.

Seaholm served as Austin’s sole source of electric power from 1950-1959 until demand outpaced the 120 megawatts the plant could produce with all 5 boilers running. In 1989 the plant stopped providing power to the city and was used as a training facility until it closed entirely in 1996.

Today the building is listed on the National Register of Historic Places and designated as a Recorded Texas Historic Landmark. (en.m.wikipedia.org)

According to an article written by David Weible in 2016 for savingplaces.org, the power plant was shut down for good in 1992.  The site sat nearly untouched for almost a decade becoming overgrown, disheveled, and forgotten. In 1997 the city of Austin decided to demolish the structure until a local group sprang into action to save it.

In 2005 a team was selected to redevelop the 7.8 acre site including the power plant itself.  Recognizing the historic significance of the building, the team saved as much of the old infrastructure as it could.

After a coffee/water break, we head back… 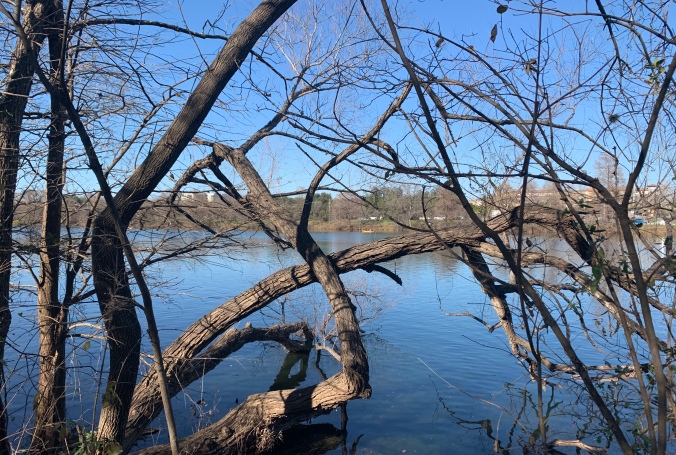 A glimpse of the University of Texas Tower where Charles J. Whitman took control of the observation deck on August 1, 1966, and mass murdered 17 innocent people including his mother and his wife…

It’s cocktail hour and we are on our way to Hotel San Jose, a South Congress Avenue gathering place for locals and visitors alike, per its website. 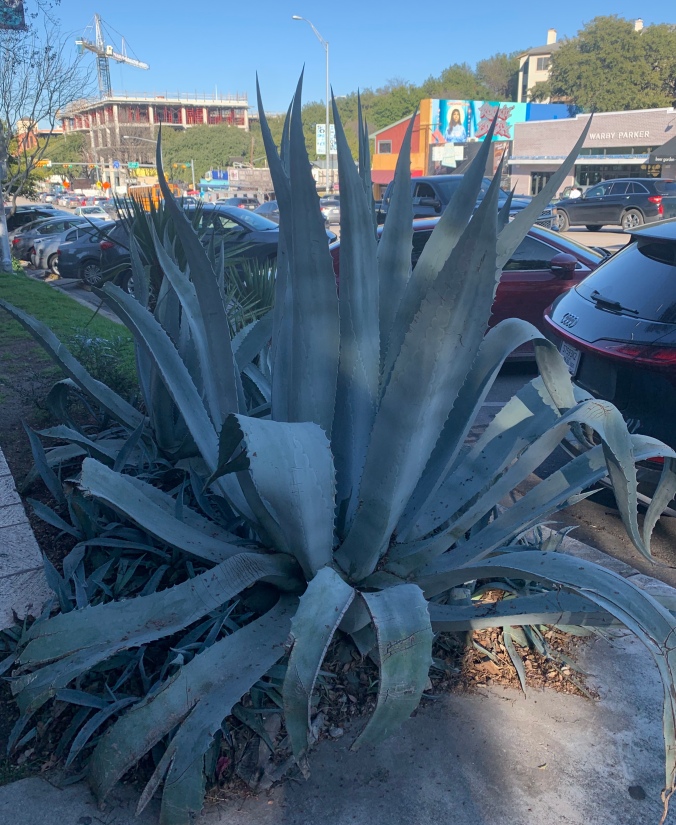 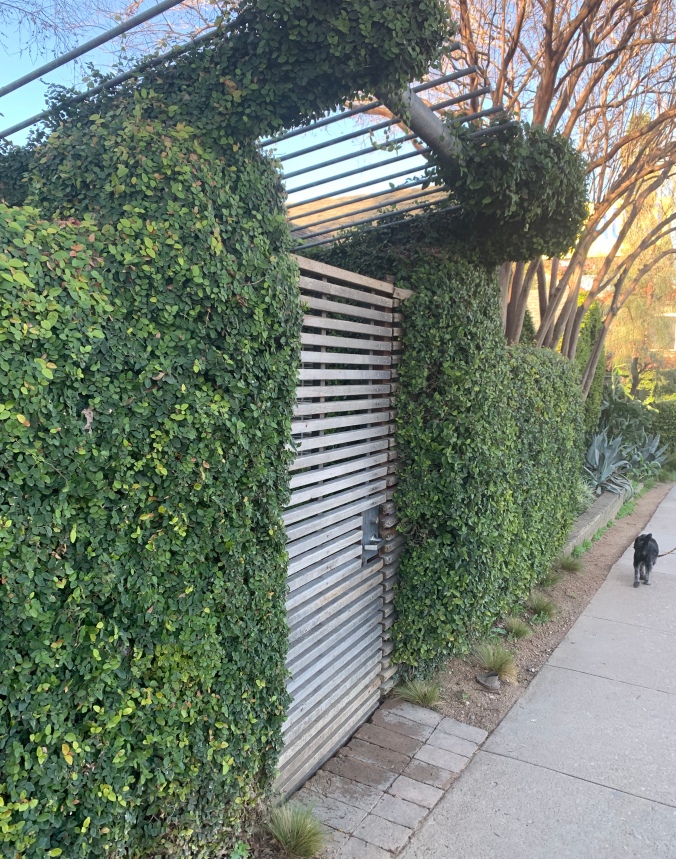 Built in 1936 as a motor court, the property reopened in 2000 as a transformed 40-room urban bungalow-style hotel tucked behind stucco walls and set amidst lush garden courtyards. (sanjosehotel.com) 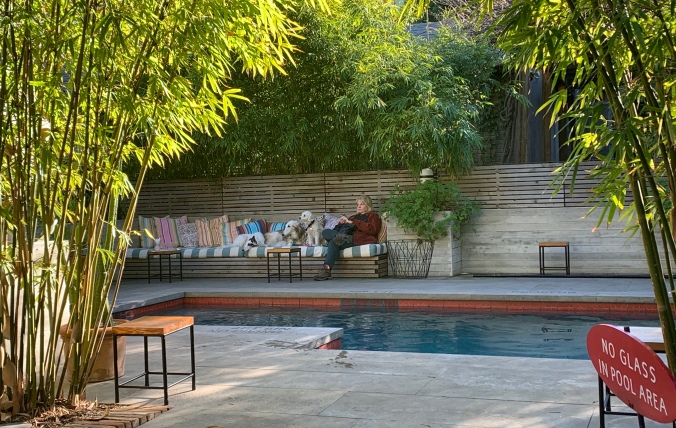 According to the hotel website, Liz Lambert left her job as a prosecutor in the Manhattan District Attorney’s office in 1994 and returned home to Texas. While working in the Attorney General’s office in Austin, she used to hang out at the Continental Club on South Congress Avenue and fantasize about doing something with the old rundown 1930’s hotel across the street.

At that time South Congress was a haven of drugs, crime and cyclical poverty. On a whim, Liz approached the owners of the San Jose motor court and found out they had just put the property up for sale!

Liz bought the hotel with the intention of renovating it one room at a time, but she ended up running the place in its existing state as a low rent residence for 3 years as she gathered funding for what was eventually a $3 million project. She chronicled her experiences with her residents on video camera creating a 90-minute documentary entitled The Last Days of the San Jose. 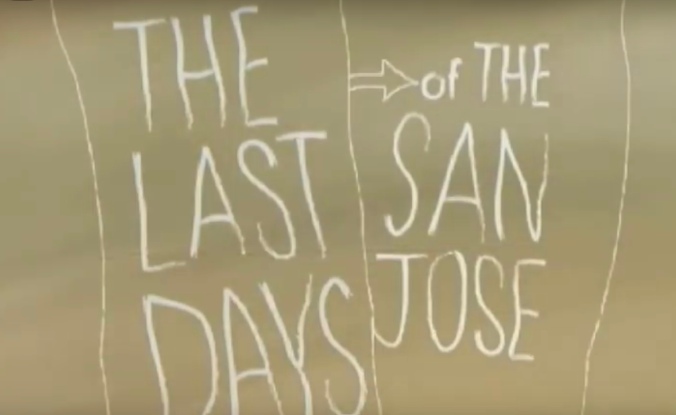 photo captured from trailer on You Tube 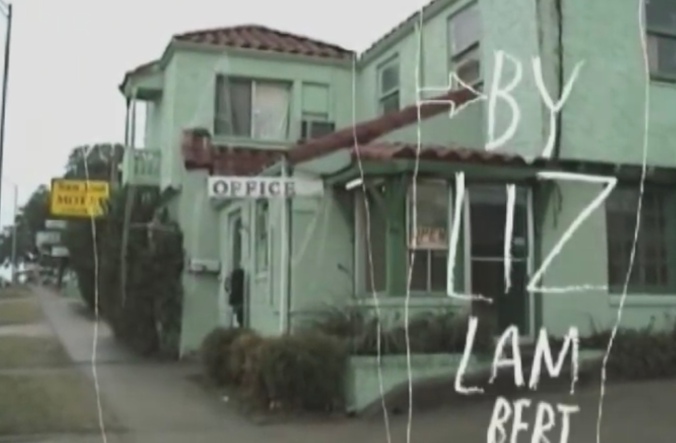 photo captured from trailer on You Tube

An article by Anne S. Lewis in the Austin Chronicle 2005 entitled, Anybody’s Home?, describes the documentary as “on the surface, a seemingly straightforward tale, but oh, the wash of contradictory emotions this doc sets in play and the layers of knotty unanswerable questions – moral, ethical, sociological – and city planning issues it raises.”

The outdoor bar is the perfect venue for its signature drink, a charcoal margarita. Of course I have to have one!

The frozen rose is another delicious favorite. Olivia and I say cheers!

As I approach our table with another round, I am carrying my charcoal concoction…

Can you tell we’re having a really good time together?

We regroup and refresh at our own residences for a bit, and grab dinner at Taco Flats on Burnet Road. Yum!

We end our gloriously beautiful and delicious day just down the street at Ginny’s Little Longhorn Saloon, one of Austin’s honky-tonk country music venues. 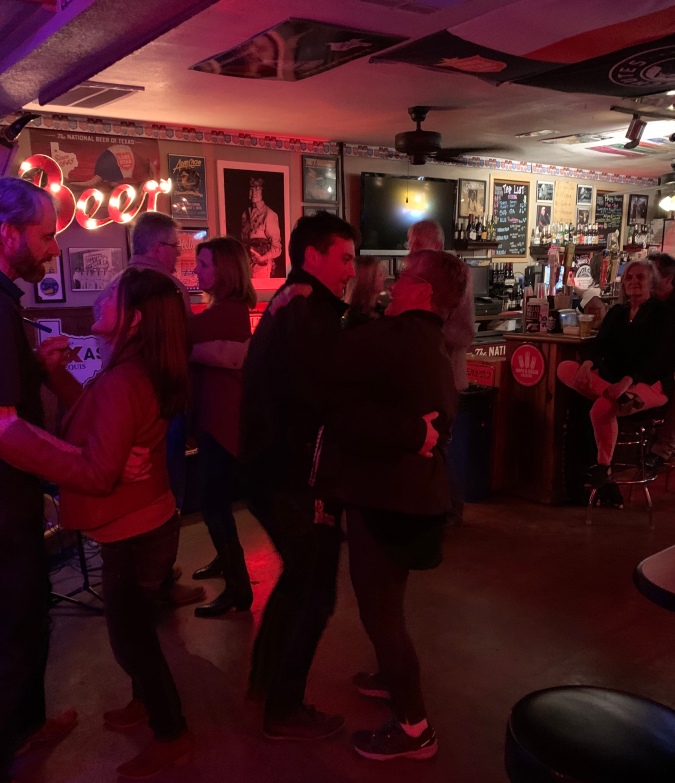 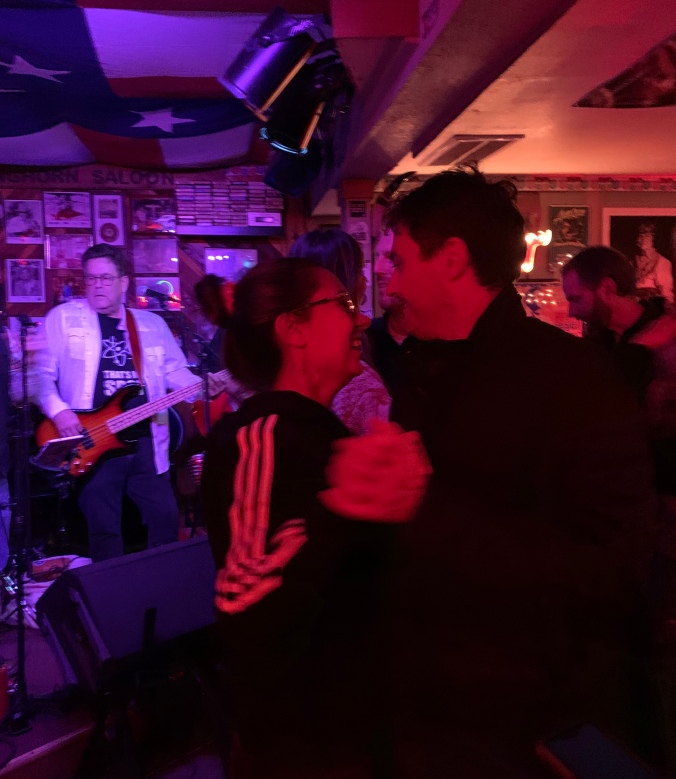 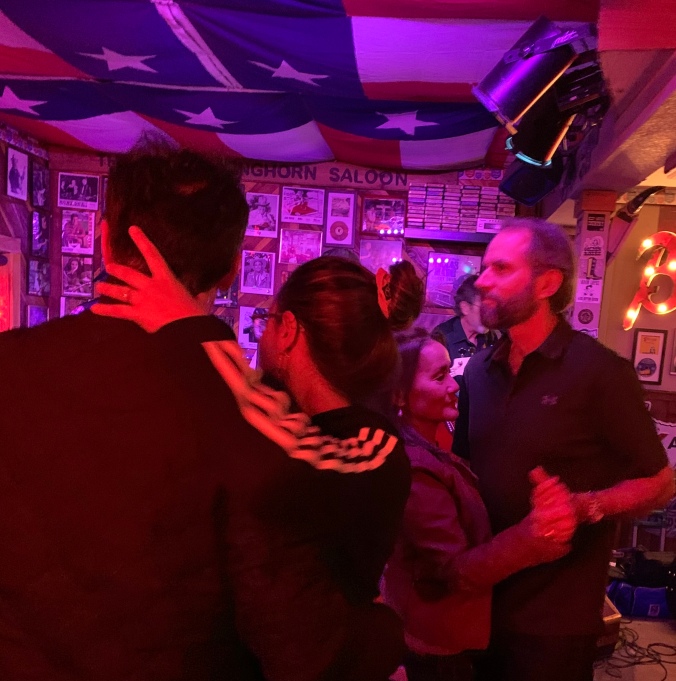 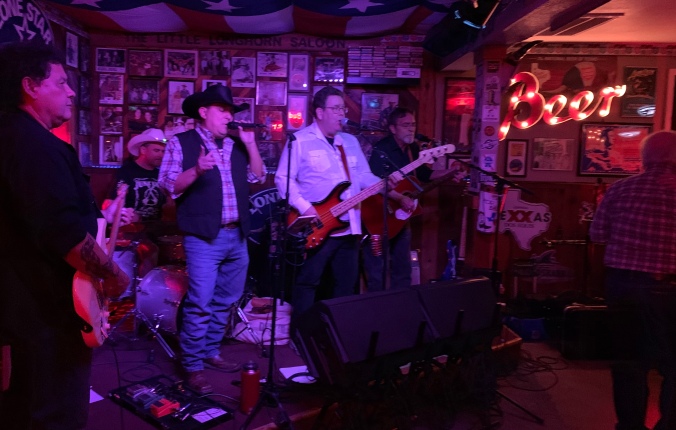 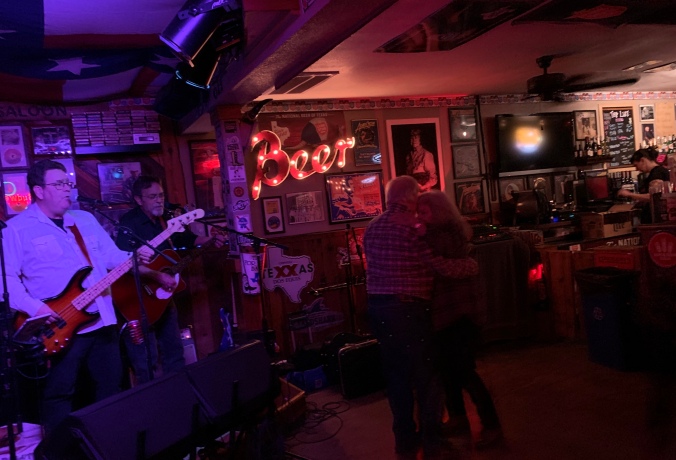 Oh, and before I forget, you need to know that The Little Longhorn Saloon is home to Chicken Shit Bingo. I’m not making this up. 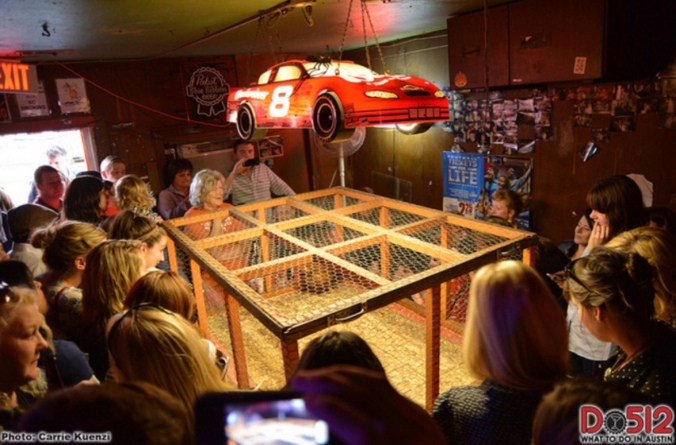 According to theculturetrip.com, all ages are welcome to participate in this unique version of bingo which involves chickens and chicken feed. For a few dollars donation, participants purchase tickets in line. Each ticket corresponds to a number on the bingo table. If the chicken poops on your number, you win a cash prize.

And that’s the rest of the story!

So, it’s a wrap! Laughed out, tummies full, tired… we all go home to a good night’s sleep. No doubt about it, we are having a wonderful time in Austin with John and Olivia! Thank you for being such wonderful hosts.

One last pic… the Capitol Building as seen from Burnet Road… 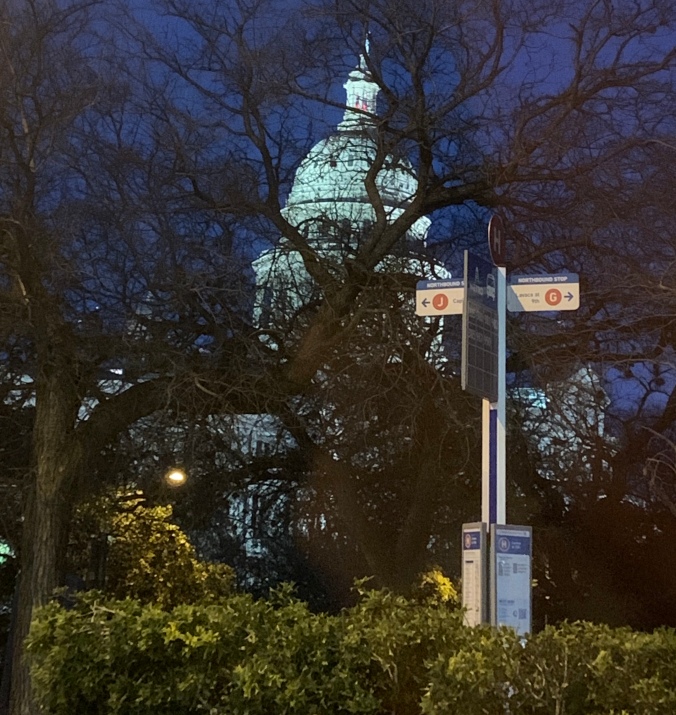