As we spend time outdoors, in the natural world and wilderness, it’s important to be aware of the effects our individual actions may have on plants, animals, other people, and entire ecosystems. By practicing the 7 principles of Leave No Trace, we can minimize our impact while still enjoying our outdoor experience. (nps.gov)

These principles were established in the mid 1980s by The Leave No Trace Center for Outdoor Ethics, LNT.org, and built on work by the US Forest Service, National Park Service, and Bureau of Land Management. (nps.gov)

Our Preserve Manager, Ginny, knows how much I enjoy organizing, labeling, and creating signage so when she meets with our team of hosts and we discuss a need for communicating important information, I get to design a poster for Ginny’s approval.

Since we are a privately owned Nature Preserve and not a National Park, no overnight camping is allowed here. So I adapted the 7 principles to fit our environmental needs. Below is the poster I created:

Here are some examples of the “traces” various visitors have left behind this season:

Three pair of shoes left in the parking lot…

I guess they changed into hiking boots and then forgot about them. 😱

Leftover “props” from a photo op…

A younger woman and older man walk in carrying a dress on a hangar. Now, this is not as unusual as you may think. We often have professional and amateur photo shoots on the Preserve. We prefer that the photographers or picture subjects give our Manager a heads up so we can expect them and let them know the etiquette of the Preserve, yadda yadda.

Something about this couple alerts Tom, our co-host, and me to check out what is happening. So, we take a quick walk on the Smoketree Trail and almost fall over them. The She is posing on a cooler in the middle of the trail. Her back is arched back and her legs are seductively exposed through the slit in the halter dress she obviously changed into. The He is standing off-trail on restorative habitat taking pictures. Strewn around the cooler are red and yellow flowers and green leaves. Before Tom and I can even open our mouths, she tells us not to mind them; they are just having some fun. They brought the flowers in and they will pick them all up. Dumbfounded, we just remind him to stay on the trail and leave.

Later our Manager tells us that blocking a trail is a “No-No”, I mean, can you imagine someone in a National Park sitting in the middle of a trail or someone coming on your property and making you walk around them to enter your house?

Anyway, She and He didn’t do a very good job of picking up after themselves… 🤨 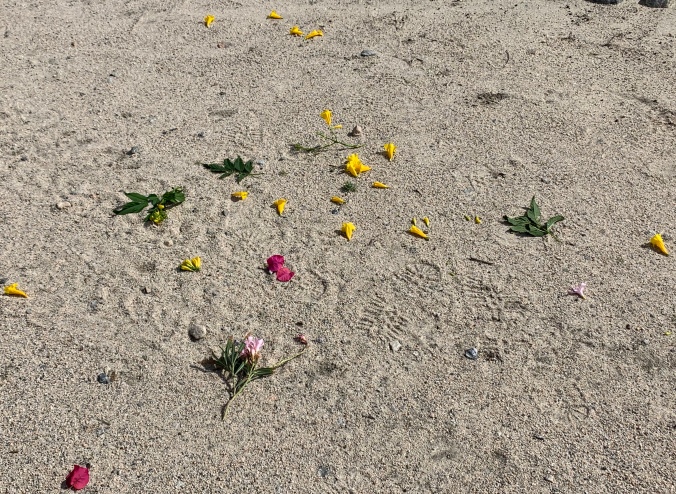 A tennis ball to knock down palm fruit…

Here’s another good one from Tom.

A family is leaving the Preserve and Tom hears a loud raucous so he goes to investigate. Apparently a father just happens to have a tennis ball in his pocket.  Really? In front of his son and wife he repeatedly throws the tennis ball up into a palm tree to try and knock down the palm fruit. His attempts prove unsuccessful but for some reason he leaves the tennis ball. Tennis anyone? 😧 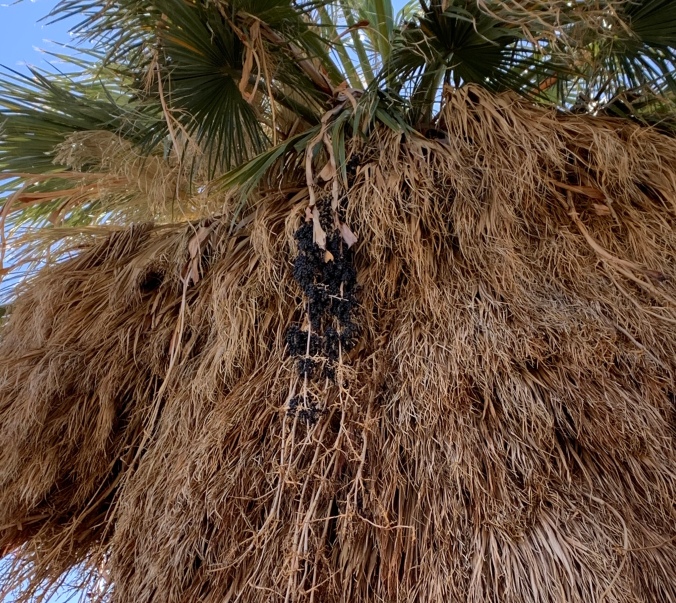 Orange peels that will not break down in the desert heat…

Organic litter is not okay!

We ask people not to feed the wildlife so what gives with leaving apple cores, and peels in the desert? What critters will eat it? Or will it just evaporate into thin air?

Do we eat banana peels or orange peels? So, why would a squirrel or desert critter? An apple core is edible, but if it is not part of an animal’s daily diet, it can change the animal’s biome to the point where it can no longer digest its normal food.

Desert animals have a special difficulty. Many of these critters have no ready source of water: They get moisture from the food they eat. They cannot flush salt from their bodies, and excess salt will kill them. (hcn.org) 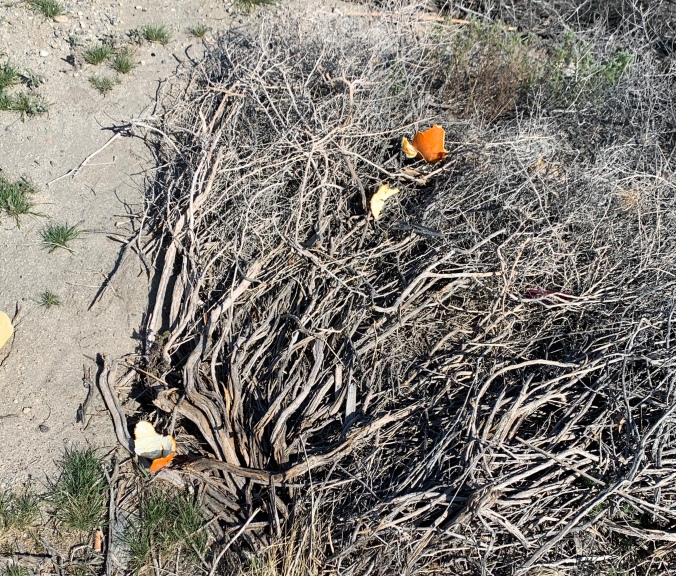 It looks like a petal from some kind of flower not found in the desert, a trace someone else left behind maybe. Where is he or she taking it and why? 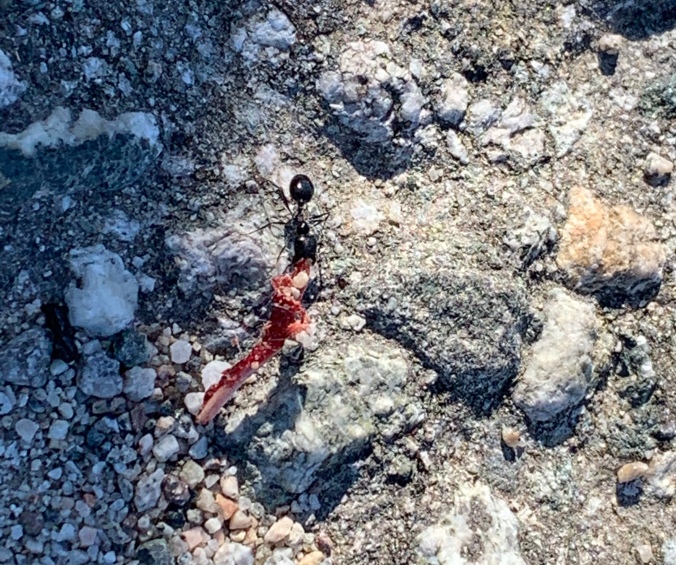 We don’t confront them, however. 😳

According to perfectbee.com, when bees swarm, a single colony becomes two because the colony needs more space to raise brood (eggs, larvae, and pupae), and store honey and pollen.

To prepare for swarming the queen bee lays an egg in a queen cup. A queen cup is an enlarged wax cell built by worker bees in case the queen lays an egg for her heir. Bees may build one or dozens of these throughout the hive. The empty cups are sometimes torn down so the wax can be used elsewhere, or empty cups may just be left alone in anticipation of the need for swarming. (honeybeesuite.com)

When a queen lays an egg in a queen cup, she plans to leave and is preparing a new queen to take over for her in the existing hive.

Up until this point the old queen has been busy laying eggs (not in a queen cup) and is heavy and not in a position to fly well. To lighten up for travel, she stops laying eggs and the worker bees reduce her feedings, leaving a gap in the egg-to-adult timeline of the colony.

The swarm starts with the old queen and 50% – 60% of her offspring leaving to relocate to a new home. Tens of thousands of bees will stream out of the hive together and choose a nearby location as an intermediary place to rest because the queen is not a great flyer at this point. (perfectbee.com)

Here’s what’s crazy though… Ginny, Harlan, some docents, co-hosts and I walked through this Arrow Weed lined path of the Smoketree Trail earlier to assess rain damage. A few hours later the swarm of bees chose to set up camp here. I can only imagine what it looked liked to observe tens of thousands of bees landing here!

And this squawking raven… 🤫

These hawk-size members of the crow family, or more technically, corvids, are everywhere in Southern California, the center of a Common Raven population boom plaguing the American West. Raven populations in the Mojave Desert have increased more than 700 percent over the past 40 years. Often considered the raccoons of the bird world, ravens are opportunistic feeders willing to feast on everything from trash to other animals. Because they will feast on the eggs and young of other desert animals, raven predation has been detrimental to many desert species. (audubon.org)

During the winter months, ravens enjoy wreaking havoc through the palm trees to eat bugs among the fronds and pick off the palm fruit. Coyotes enjoy the dropped purple berries the ravens leave behind.

According to mentalfloss.com, the collective noun for ravens is an “unkindness” of ravens. Ravens aren’t exactly friendly as they will often gang up on their prey or animals. And because of the impression that they are an ominous presence, an unkindness of ravens can also be called a conspiracy.

All I can say from firsthand experience is that these magnificent black birds appear in a noisy cloud of flapping wings rustling through the air and palm trees, calling out loudly to each other as they show off their acrobatic flying skills. They are not considerate guests. They are boisterous and not only drown out the melodies of the other birds, but completely take over the canopy of palm trees on the oasis. They’re the thugs, bullies, gangstas of the bird world. But they mesmerize me!

So… a birds’ eye review of how to be a VIP Visitor of the Preserve: