This is what the skies over the Coachella Valley Preserve looked like Saturday, August 1st, in the late afternoon. 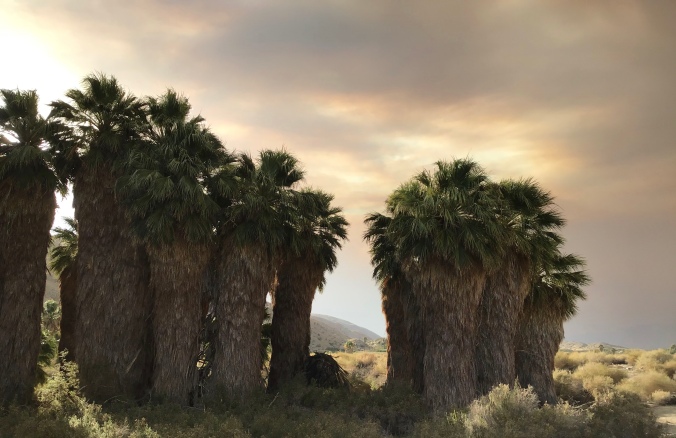 Dubbed the Apple Fire, dry conditions and triple digit temperatures became the ideal conditions for a small vegetation fire to burn out of control. The fire began Friday, July 31st, in the late afternoon. It doubled in size from 1,900 acres on Saturday morning to 4,125 acres by 3 p.m. and by 11:00 p.m. 12,000 acres, or more than 18 square miles, were on fire with 0% containment. (ktla.com)

The cause at this time was still undetermined. An ignition spark from a car, a trailer dragging a chain, and arson were all being investigated. Later I read that witnesses called 911 on Friday afternoon to report seeing a man lighting 3 fires in the area.

Here are some pictures from news footage I gathered online: 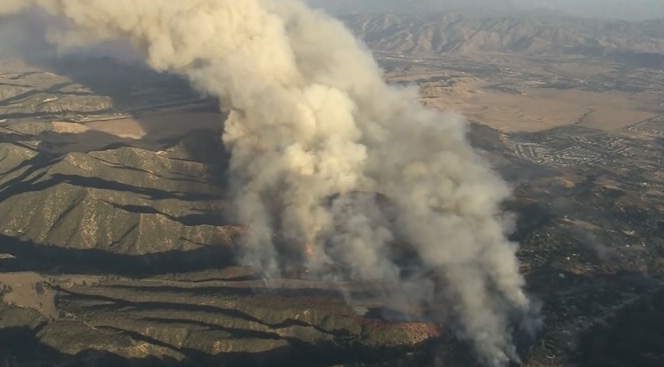 According to an article published in the Desert Sun, a Palm Springs newspaper, the Apple Fire started as at least 2 small fires shortly after 5 p.m. Friday in a community known as  Cherry Valley, a few miles from Beaumont, CA.

Here are some more pictures taken outside of the RV… 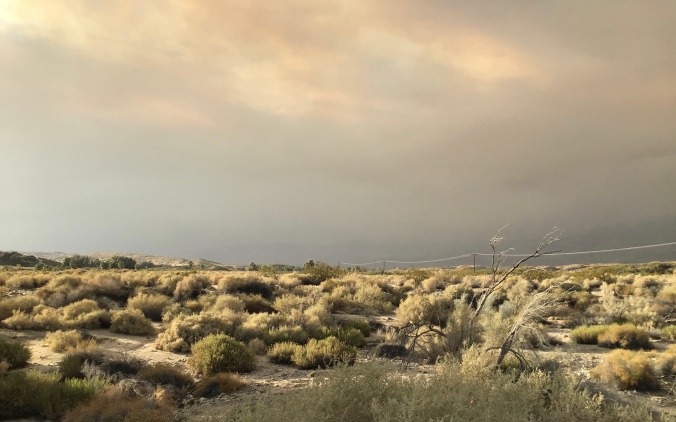 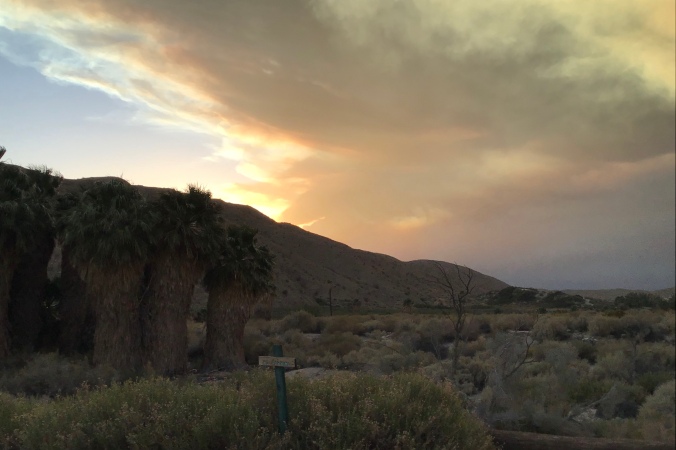 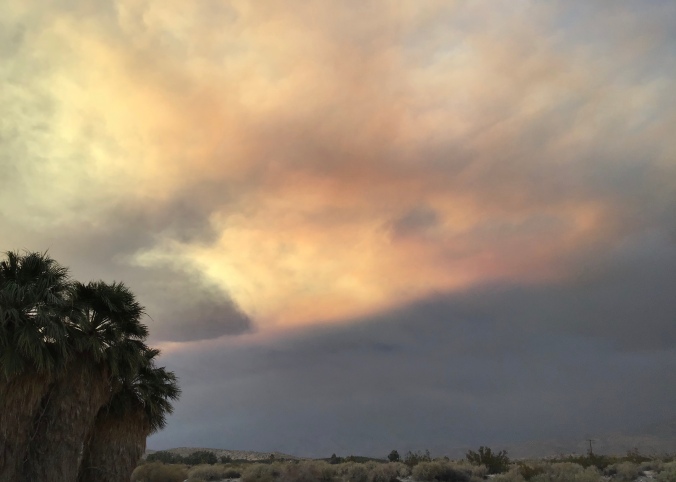 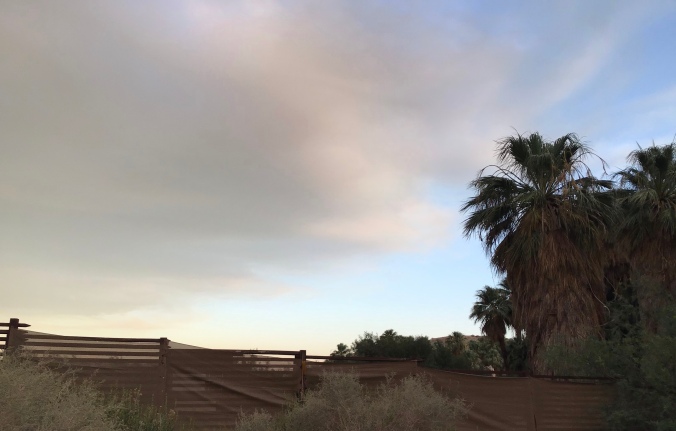 I took these pictures in the early afternoon as we headed toward Ramon Road from Thousand Palms Canyon Road.

And from the online news later in the day, I learned the fire continued to grow, scorching some 20,000 acres so far and forcing 7,800 people to evacuate. It is only 5% contained as of today. 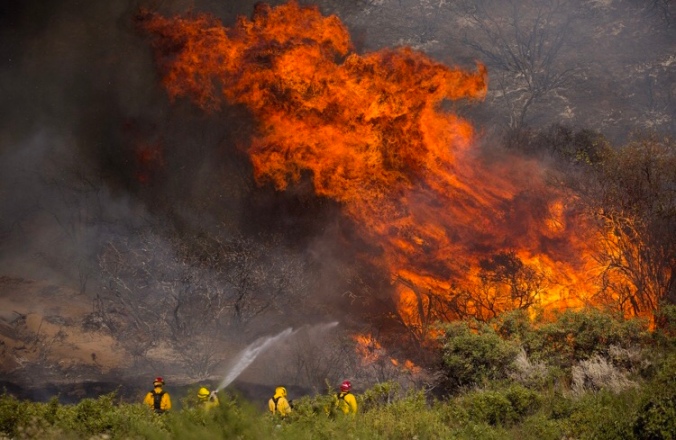 A news update from Cal Fire and Riverside County Fire Departments reported that 26,000 acres have burned so far. The official cause of the Apple Fire is determined to be a malfunctioning vehicle shooting out “hot objects” from its tailpipe. (CBSN, Los Angeles)

As Jeff and I returned from a day trip to Green Valley Lake outside of Big Bear, we cut over from CA-247 and took Pioneertown Road back to CA-62.

We noticed an intermittent scattering of parked fire vehicles and hiking fire persons along the route. As we descended from Yucca Valley into the Morongo Valley we were met with murky skies… 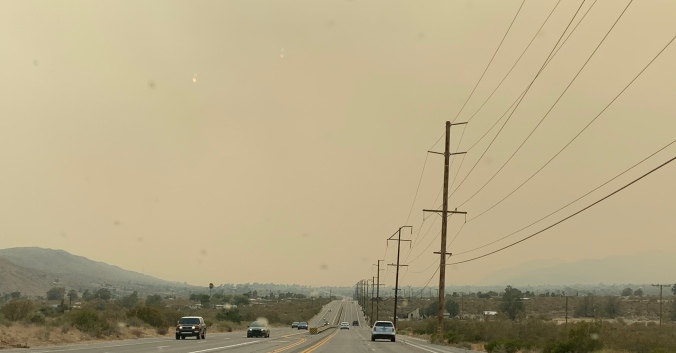 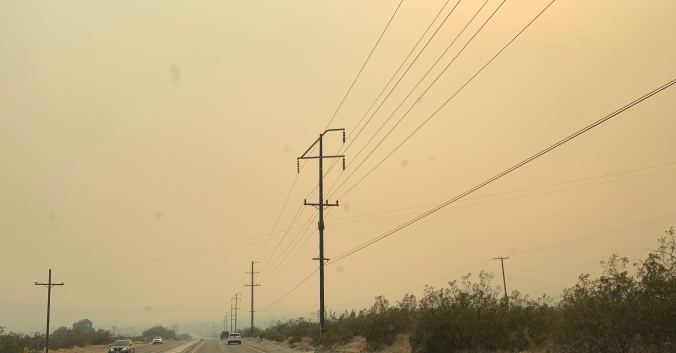 As we drove toward Palm Springs on Ramon Road, we could still see clouds of smoke from the Apple Fire.

With 90% of the Apple Fire now contained, the command of the fire has been transferred from Cal Fire to a local team led by Incident Commander Matt Ahearn of the San Bernardino National Forest. Suppression repair efforts will continue for several weeks. Rehabilitation includes mopping up along the fire line and repairing impacts on the landscape.

Fortunately no one died as a result of this fire, but 4 people were injured and 4 structures were damaged. (fire.ca.gov) 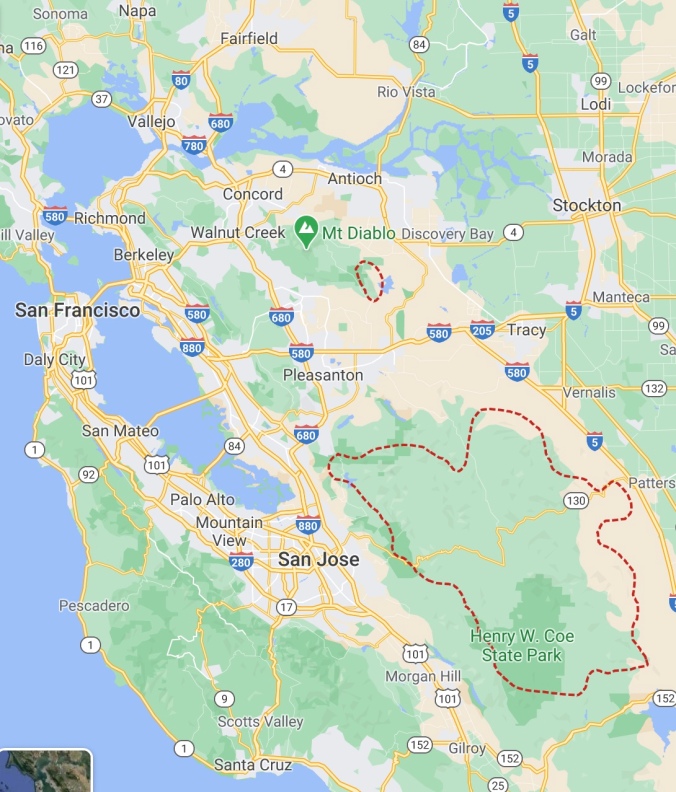 The very next day, August 17th, another fire started burning out of control near Sacramento, CA. The Sonoma-Lake-Napa Unit (LNU) fire was also the result of lightning.

Then, on Saturday morning, September 5th, a pyrotechnic device used during a gender reveal party sparked a fire at the El Dorado Ranch Park in Yucaipa.

Here’s an example of such a device:

And here’s a map of where the fire is burning:

You’re right for noticing that the area looks familiar. It is not far from the Apple Fire from the beginning of  August…

On Sunday, September 6th, we noticed a dark cloud billowing from the Little San Bernardino Mountains over Joshua Tree National Park. Smoke clouds… On Monday the air was gray and dingy and smelled like a campfire.

Tuesday, September 8th, Jeff and I pulled tamarisk seedlings from the stream. I took some pictures of the sky. The mountains had disappeared.

To date, California is burning up!

The overcast skies and smell of smoke surrounding us on the Coachella Valley Preserve is nothing compared to the orange skies in San Francisco and the terrorizing drives evacuating residents are documenting as they flee from fire zones!