FROM HERE TO THERE AND BACK AGAIN…

Since Jeff and I had never actually seen the inside of an RV, we decided to visit a local dealer. Dave, at Colerain RV in Cincinnati,  took us under his wing and showed us Class A motorhomes: new, used, diesel and gas. The new ones on the lot were spectacular with all the bells and whistles, but so were the price tags!

The used motor homes were a better fit with my retirement budget but the major downfall was the TV monitor mounted on the windshield between the driver and passenger seats. We wanted the full window view to enjoy all the scenery from our higher vantage point as we traveled from place to place. 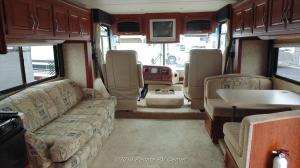 Maybe we could remove it and find a place to mount a newer flat screen TV monitor? We entertained the notion of re-modeling for a second or two and decided we needed to further our education on recreational vehicles.

So I searched the web and read everything I could about RV living and organizing while Jeff browsed rvtrader.com, craigslist.org and local dealer sites. We saw an advertisement for the Cincinnati-Dayton RV Supershow scheduled for January in Vandalia, Ohio. (At this time we were convinced that we needed a Class A diesel motor home between 38 and 40 ft. long.)

When we arrived at the Supershow, however, we were bombarded with travel trailers, motor homes, fifth wheels, toy haulers and more, not to mention the vendor booths featuring camp grounds, satellite dishes, generators, parts and accessories!  And it was here that we discovered the roominess and full kitchens of the fifth wheel… We could see ourselves  living in one of these! 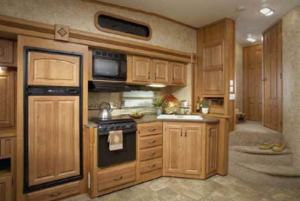 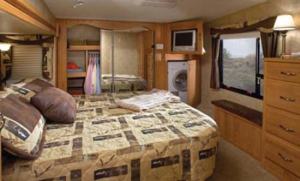 The price was right, compared to a used-Class A diesel equipped with all of our wishlist requirements. The drawback was needing a large enough truck to pull it and sacrificing the view from the driver and passenger seats.

We left confused once again so…

I continued to research RV living and Jeff kept on searching for RVs online. By this time we were back at our original quest for a Class A diesel 38-40 ft. long.

In the spring we traveled to Lake St. Mary, Ohio to look at a used 2009 Damon Tuscany…  had everything we wanted, right price but wrong time… We still needed to get our house ready to sell. In the winter we traveled to a remote place in Delta, Ohio to look at a used 2008 Damon Tuscany. Again it had everything we wanted, had a great price, but the timing was wrong. But here’s what we learned: We wanted to purchase a Damon Tuscany and we trusted that when the timing was right we would find the RV.

Meanwhile we worked on a timetable for placing the house on the market. I began storing office supplies in storage bins, purchasing RV friendly goods and getting ready for retirement. Jeff took care of the list of home repairs and finding out how to sell our house on our own. Baby steps… 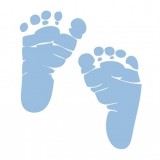 My first grandchild arrived in April and I was tempted to reconsider the whole RV living adventure and devoting myself to Grammy L-hood. My husband, Jeff, became my inspiration. He has 4 grandchildren living several states away yet he remains the beloved Papa Jeff. So, I began researching creative ways to grandparent from a long distance!

Meanwhile, as my retirement date of May 29th approached, Jeff began re-considering our need to purchase a used Class A diesel, 38-40 ft. motor home. (Seriously, we never owned an RV before, let alone spent a night in one!) So, our new search included a used Class A gas RV less than 38-40 ft. in length.

AND SOMETHING AMAZING HAPPENED. The first Monday of my retirement, Jeff and I planned on looking at 2 used-Class A gas RVs. One was being sold by a previous owner and the other was on the lot of the local dealer we first visited. After making an appointment to see the for-sale-by-owner RV later in the day, we reconnected with Dave at our local dealer. He listened with a smile as we re-introduced ourselves and told him which used RV we wanted to see. His reply went something like this, “Why look at a used RV when I can show you a new RV that fits your price?” 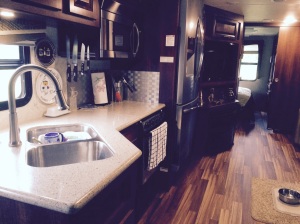 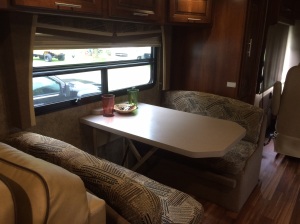 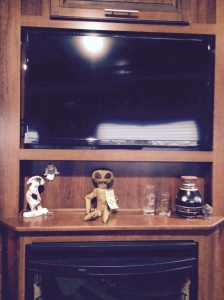