Our final stop before arriving in Kelly-O’Connell Land is at the Shady Lane RV Camp in Barstow, CA, off I-15 and Highway 58. It is in the middle of nowhere, but kind of fun in a quirky way. Jim, the manager, is a hoot and a half! He guides us into our spot on his golf cart, before asking for any payment, and tells us to settle in. His office is an old camper with a low threshold and he reminds me to watch my head before I enter. Only cash and checks are accepted. Along with my receipt, he hands me the TV Week section of the local newspaper, a highway traffic alert number and a mileage chart to different cities. And, since it is the day before Halloween, he insists I grab 2 candy treats for Jeff and 2 more for myself! 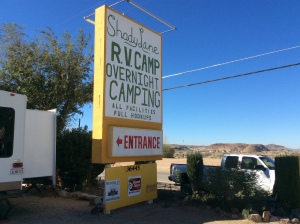 It is a major transportation center for California’s Inland Empire. The I.E. is the name the U.S. Census Bureau uses to refer to the southern region of California, directly east of Los Angeles. I-15, I-40, Route 58 and Route 66 all converge here. It is also the site of a large rail classification yard where railroad cars are separated onto different tracks.

Begining in the late 1840s Barstow became more and more important as a travel route for people, animal herds, and freight wagons between New Mexico, Utah, and Los Angeles. The fall and winter rains replenished the grasses and water supply attracting travelers to follow the course of the Mojave River past Barstow. Following the discovery of gold and silver, railroads were needed to transport miners and goods. The Southern Pacific passed through Barstow connecting the cities of Mojave and Needles in California. Before the interstate highway system was established Routes 66 and 91 converged in Barstow before continuing west to Los Angeles. (from en.m.wikipedia.org)